Saul 'Canelo' Alvarez is attempting to become Mexico's first undisputed super-middleweight champion when he puts his WBC, WBA and WBO belts at stake against IBF champion Caleb Plant in Las Vegas this weekend

Saul 'Canelo' Alvarez warned Caleb Plant that their undisputed world title fight will be 'different' to their wild brawl in front of the cameras.

The super-middleweight champions had traded blows back in September at the first press conference for their Las Vegas fight.

But Canelo suggested that Plant will find out the reality of facing him when they settle their rivalry, in the early hours of Sunday morning. 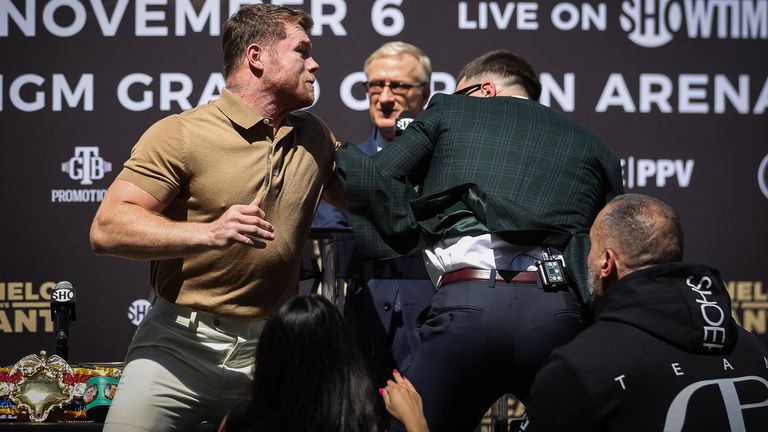 "No, nothing. It's different when you're in the ring," said the Mexican star at the final press conference.

"It's way different, so I don't take nothing from that."

Plant also played down their physical confrontation, saying: "It wasn't my intention to get under his skin. Then again, I think you guys make a lot more of it than we do.

"Again, like he said, when the bell rings, it's completely different. I don't take anything away from the press conference."

America's IBF champion holds an unbeaten record and insists he is fully capable of inflicting Canelo's second defeat since he was beaten on points by Floyd Mayweather in 2013.

"Just by any means necessary of getting the job done," said Plant. "I feel like not just myself, my team, we've done that this far to get to this point.

"Me, whether it's in boxing or whatever, by any means necessary I've got here.

"Saturday night, I just can't wait for the bell to ring."

Canelo, the WBC, WBA and WBO title holder, reiterated that his sole focus is to become the first Mexican to hold all the world belts in the division.

"That's the goal, to be an all-time great," said the four-weight world champion. "I'm so proud of trying to achieve that.

"I'm never going to stop until I try my best to be one of the all-time greats.

"Only one thing goes through my mind, and that's winning.

"That's the only thing I'm concerned about. Everything else is beyond me.

"The only thing I care about is what's going to happen inside the ring on Saturday night."