Dom Sibley is unlikely to win any awards for aesthetics.

He does not possess the coruscating cover drives of Ian Bell, he does not sweep the ball as crisply as Joe Root, he doesn't send deliveries into the stands with the ease of Ben Stokes.

Every run looks like it is hard work. Hard work that, you sense, he relishes.

Each time a challenge has been presented to Sibley in his short Test career to date he has found a way to overcome it. Not immediately but eventually.

Having piled on runs for Warwickshire in the 2019 County Championship - his haul of 1,324 was almost 350 runs more than his nearest challenger - the next objective was to prove he could transfer that to Test level.

After averaging 14.20 across his first three Tests, two in New Zealand and one in South Africa, with a top-score of 29, Sibley went on to notch an unbeaten 133 in his fourth game in Cape Town, against a Proteas attack containing Vernon Philander, Anrich Nortje and Kagiso Rabada.

Then he had to prove that wasn't an anomaly, which he did in the Manchester Test against West Indies in July with an innings of 120.

Then he had to prove he could deal with quality spinners, having been dismissed by bowlers of that type in five out of seven innings before he went out to bat for the final time in Sri Lanka.

Pakistan leg-spinner Yasir Shah had removed him twice at home in the summer of 2020, while Sri Lanka left-armer Lasith Embuldeniya picked him up three times in a row in Galle for scores of four, two and nought.

Once again, Sibley found a way, with an unbeaten 56 in the second innings of the second Test, in which every ball he faced was bowled by a spinner, helping steer England to a 2-0 series win.

Yes, he had slices of luck with three lbw reviews remaining with umpire's call due to not enough of the stumps being hit for the decisions to be overturned.

Had the umpire's finger gone up initially, it would have been a different outcome and pressure on his place heading into the India series would have intensified even further.

But Sibley still showed improvements as he batted for 144 balls - having only faced 34 balls across his first three innings of a series which candidly admitted himself, had left him "in a pretty dark place".

"I'd had a bit of a stinker in the series. Having worked really hard on playing spin before we came out here during the winter months in England, you start to doubt yourself," said Sibley, after his half-century in Sri Lanka.

"To change [things mid-series] takes a bit of courage but I changed a couple of things and luckily it paid off."

England assistant coach Graham Thorpe noted how the opener was "making strides" against spin when he was quizzed about him between the Sri Lanka and India series and Sibley proved that - quite literally - in his 286-ball 87 on day one of the first Test in Chennai.

Gone was the tentative player we saw poke and prod in the first three innings of the Sri Lanka series, replaced with a batsman who was assured in attack and defence and who made great strides forward down the pitch.

According to CricViz, Sibley played on the front foot just 43 per cent of the time in Sri Lanka but at one stage against India on Friday that rose to 71 per cent. He also came down the pitch more than he had in the past as well. 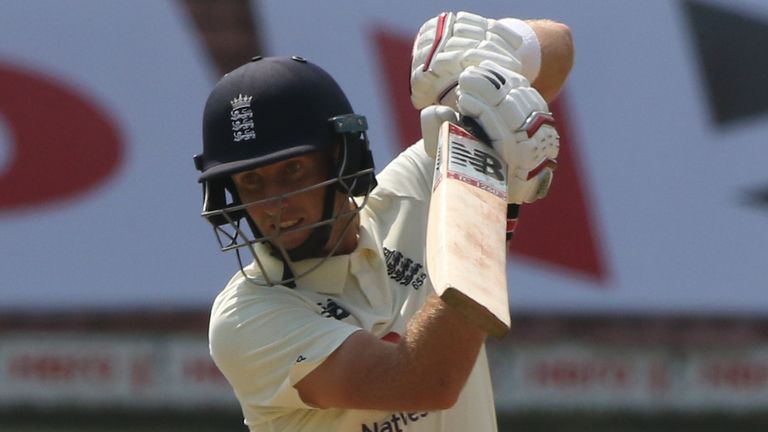 I thought it was a fantastic innings. To come out with maybe a few question marks in his own mind about his game against spin and put a performance early on in this series like that was really impressive. He should take a lot of heart and confidence. He deserved a hundred but that's what happens when you play against good players - they can take wickets later on in the day.

An excellent lunge into the ball saw Sibley lace Ravichandran Ashwin past mid-on for four, while he jigged to the pitch of the ball before hitting the four off Shahbaz Nadeem which took England into three figures.

CricViz also noted that, at one stage, Sibley's false shot percentage stood at just 7.5 per cent, the lowest he had ever registered in a Test innings in which he had scored a half-century.

He seems a real learning cricketer, even taking a leaf out of Root's book by playing the sweep shot at times.

Rory Burns and Dom Sibley put on the first half-century opening partnership by a visiting team in India since Matt Renshaw and David Warner added 50 for Australia in Ranchi in March 2017 – 12 Tests ago.

It was a real shame, then, that, with what turned out to be the final ball of the day, he was pinned lbw by Jasprit Bumrah as his hopes of turning a fourth Test fifty into a third Test hundred were dashed.

On this evidence, and how we have seen Sibley adapt since debuting in New Zealand in 2019, it shouldn't be too long before he completes another ton

"One thing that has really improved since Sri Lanka is his picking of length against spin - that ability to rock back against that slightly shorter length and knock it in the gap for one.

"We know he is strong through midwicket but some shots through the off-side were new to his game, we hadn't seen them yet.

"Test cricket isn't always about talent, it is about getting those results and the character you need to get them. That is why England like him.

"It could have been easy for him to throw in the towel in Sri Lanka and say 'I can't play spin' but you can see how hard he has been working,

"He is never going to be a Joe Root, fleet of foot - he is a bit more plodding but it's a way, a method. Ben Stokes and Jos Buttler will be thanking him when they get in."

Sky Sports Cricket's Nasser Hussain said: "What has impressed me most about Sibley in his Test career so far is his willingness to learn.

"It was classic old-fashioned opening batting from Sibley [on Friday]- soaking up the first session and going hard at the bowlers when they tired.

"He came down the wicket on a number of occasions against the spinners and clipped it through midwicket for four and got some sweeps out. He's learnt a lot from Root, going fully forward and fully back."

Dom Sibley. Aesthetic? No. Effective? Without a doubt.

Follow over-by-over text commentary from day two of the first Test between India and England in Chennai from 3.55am on Saturday on skysports.com and the Sky Sports app.