Adam Lyth hit the quickest-ever 50 in The Hundred; Jason Roy was dismissed for a second-ball duck as the Invincibles chased 158; watch Southern Brave v London Spirit on Friday, with the women's fixture live on Sky Sports from 2:30pm, followed by the men's fixture at 6pm 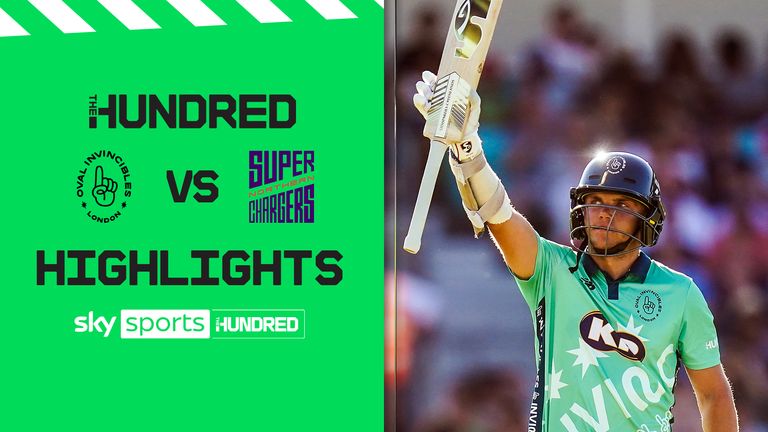 Sam Curran hit a crucial 60 off 39 balls as the Oval Invincibles secured a thrilling win over the Northern Superchargers in The Hundred with just three balls left.

In the opening match of the first double-header of The Hundred 2022, the momentum continually shifted, Sam Curran's 60 runs combined with Jordan Cox's 48 proving the difference as the Invincibles took the win with just three balls left as they chased the 157-7 set by the Superchargers.

Adam Lyth hit the quickest half-century in The Hundred so far - from 17 deliveries - but it proved to be in vain as the rest of the visitors' batters failed to build on his score - he was eventually dismissed for 79 from just 33 balls. 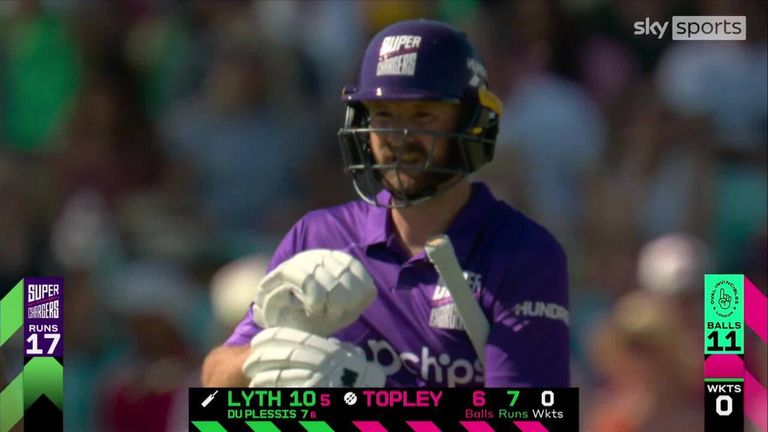 After winning the toss in his first match as Oval Invincibles captain, Jason Roy chose to bowl first at the Kia Oval.

Lyth got off to an electric start for the Superchargers, hitting four sixes from four successive balls to pile the pressure on the Invincibles.

The likes of Tom Curran and Reece Topley could find no answer to the Yorkshireman as he raced to 53 off just 17 balls, cutting a four through the covers to backward point to seal his historic half-century. 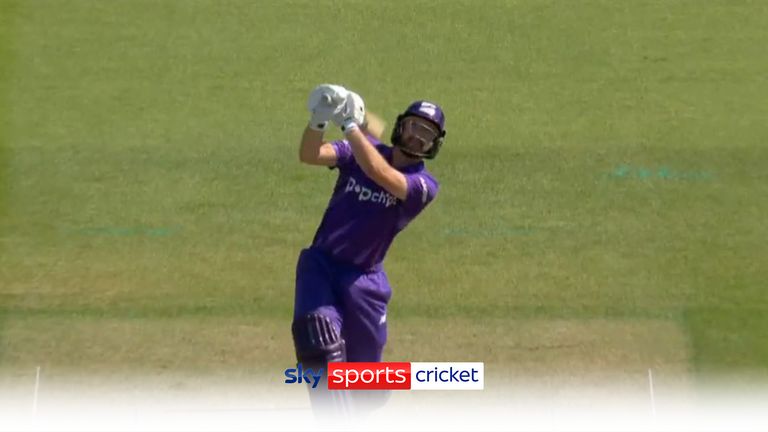 Lyth's performance with the bat was much of a solo one, Faf du Plessis falling for nine off 10 balls before Michael Pepper was dismissed for 16 off 19 balls, putting the Superchargers at 86-2 just after the halfway mark.

Sunil Narine's off-spin helped to reduce the speed of Lyth's run tally before his brilliant innings was finally brought to an end by a ball from Matt Milnes with Jack Haynes positioned well at mid-wicket to take the catch and see Lyth gone.

With Narine back into the attack for his final five balls, he made his presence felt and dismissed Adam Hose and David Wiese from back-to-back deliveries, Wiese falling for a duck as the Superchargers struggled to back up the performance from Lyth. 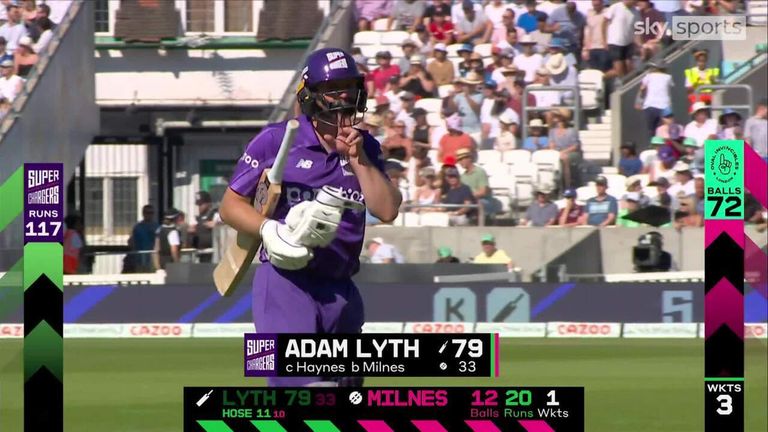 The momentum continued to fall away for the visitors as John Simpson departed next for just 14 off 10 balls, Sam Curran positioning himself well on the boundary, before Dwayne Bravo was caught by Hilton Cartwright for a duck, reducing the Superchargers to 138-7 with just eight balls left.

Ben Raine and Roelof van der Merwe saw out the innings, the latter finishing it off with a big six to put the Superchargers on 157-7 after 100 balls.

With the Invincibles needing a big opening score from Roy, it was not the batting performance he would have hoped for as he was dismissed for a duck, facing just two balls before Bravo took the catch from Raine's delivery. 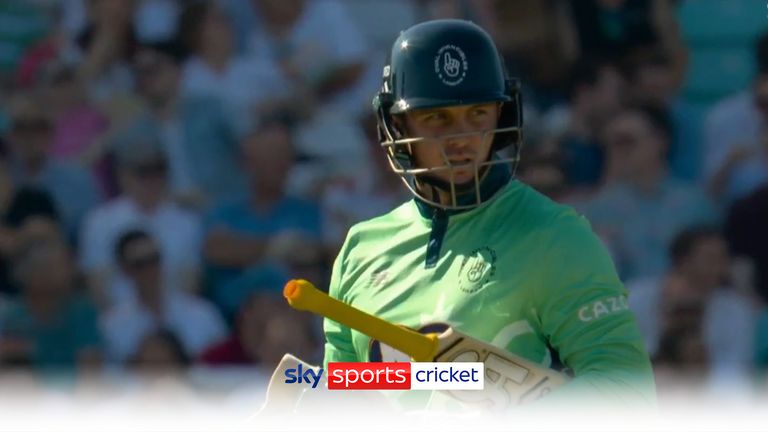 With Matthew Potts missing as he prepares for international duty, the visitors turned to Craig Miles in their bowling attack and he did not disappoint, dismissing Narine for just four off three balls as things went from bad to worse for the Invincibles openers.

Rilee Rossouw was then dismissed after a review for lbw for just nine off eight balls, Bravo's delivery pitching in line and reducing the home side to 21-3.

However, Cox began the fightback for the home side as he hit three boundaries in four balls but was run out just short of reaching the half-century mark, leaving the field on 48 off 29 balls.

It was then left to Sam Curran to continue the charge and he found a new level, hitting three sixes and eight fours to help bring up his half-century and put the Invincibles level with the Superchargers at the same point in the proceedings.

With 23 runs needed from 15 balls, the Superchargers brought Bravo back into the attack and he took the key wicket, opting for the slower ball and hitting the wickets to see Sam Curran walking off for 60 off 39 balls.

It was then the turn of the other Curran brother - Tom - to score some key runs as he hit two sixes in two balls to leave the Invincibles needing just five from five and a dropped catch from Du Plessis helped them secure the final few runs to secure a narrow victory with just three balls remaining. 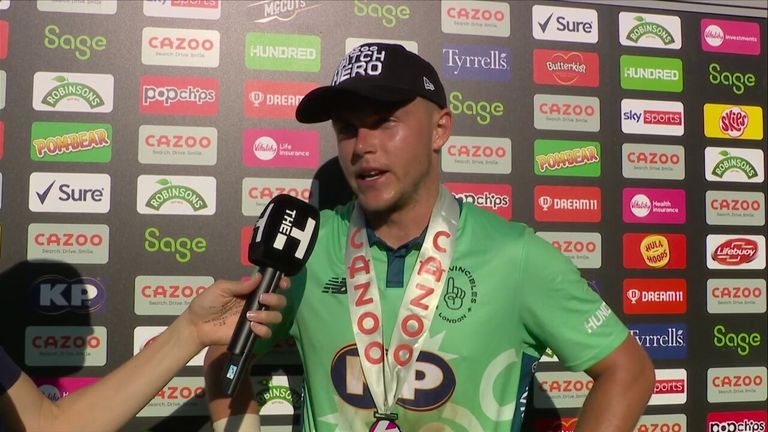 "I think The Hundred almost needed that game that was going to be close.

"We have played in two games at the Kia Oval and it has been amazing.

"Those are the games you want to play in where they are really close then win as well, so it gives us a lot of confidence."

Friday sees the Southern Brave welcome the London Spirit to The Ageas Bowl. Build up on Sky Sports The Hundred, Sky Sports Mix and Sky Sports Main Event begins at 2:30pm ahead of the first ball at 3pm in the women's fixture.

The men's fixture will take place afterwards, with coverage at 6pm. You can also watch the match via our a free live stream on skysports.com, the Sky Sports App and the Sky Sports Cricket YouTube channel.

Watch every match from The Hundred this summer live on Sky Sports. The competition continues on Friday with Southern Brave up against the London Spirit, the women's match live from 2:30pm followed by the men's fixture at 6pm.