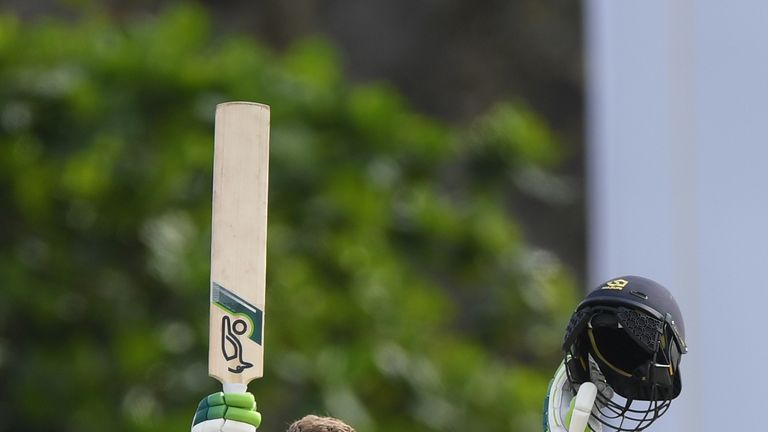 Keaton Jennings says he has ignored criticism of his selection for the tour of Sri Lanka after scoring an unbeaten 146 in the first Test.

The century was the opener's second in Tests, coming 23 months after his first, on debut in India, and helped England reach 322-6 before declaring to set the hosts a world-record 462 to win in Galle.

Jennings endured another difficult summer but says he has been unfazed by calls for him to be dropped prior to the series and is instead hoping to push on and produce more important knocks for England.

"I suppose all you can do is try and score runs when you get the opportunity," he told Sky Sports.

"At the end of the day, the summer was tough and performances weren't up to scratch, I'm happy to admit that. Hopefully now I can keep putting in performances that put us into match-winning positions.

"I did [read criticism] a year ago and think I got myself into quite a state reading that, waking up in the middle of the night stressing about it but no, not anymore. I just let myself listen to a core group of people who I suppose have stuck with me for the last 25 or 26 years.

"It's been a very special day for me personally and it's special to be in such a good position in this Test match, hopefully we can go on and win it.

"It was about taking the risks at the right time, it felt like there was a ball in there that could get you out so it was that cat and mouse game again, trying to get off strike, trying to put pressure on the bowler in order to get that bad ball.

"It's tough but when you bat with a guy like Stokesy because of his aura, the way he hits the ball and the way he goes about playing, it is made easier. Then Jos walks in and belts it all over the place as well so it's just a really, really pleasing day from a team perspective."

Watch day four of the first Test between England and Sri Lanka live on Sky Sports Cricket from 4.15am on Friday.