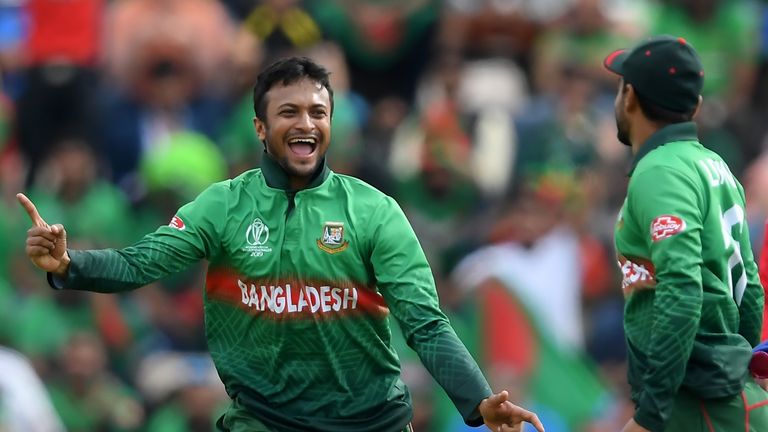 Bangladesh boosted their hopes of reaching the Cricket World Cup semi-finals, beating Afghanistan by 62 runs at The Ageas Bowl.

Bangladesh move to within a point of England, who currently occupy the fourth and final qualification spot - the tournament hosts are in action against Australia, at Lord's, on Tuesday, live on Sky Sports.

Shakib Al Hasan has undoubtedly been Bangladesh's best player, and arguably the player of the tournament, and the all-rounder was at his brilliant best once again in overcoming Afghanistan.

Shakib scored 51 with the bat - his fifth score of fifty or more in six innings - as Bangladesh posted 262-7, but it was with the ball this time where he did real damage, taking 5-29 in 10 stunning overs of left-arm spin to rip through Afghanistan.

Afghanistan were nowhere near as impressive as in their heartbreaking 11-run loss to India at the weekend, but captain Gulbadin Naib (47) and Samiullah Shinwari (49no) put up a fight - Mujeeb Ur Rahman (3-39) earlier impressed with the ball too - before they ultimately succumbed some way short, bowled out for 200 in 47 overs.

Afghanistan stay rooted to the foot of the World Cup table, winless after seven games, with meetings against Pakistan and West Indies to come. Bangladesh are next in action against India on Tuesday, July 2, before a final game against Pakistan three days later.

While Shakib was undoubtedly the star of the show, he was actually overshadowed by Mushfiqur Rahim with the bat after Afghanistan won the toss and inserted the Tigers.

Mushfiqur followed up his fine hundred in a losing cause against Australia with a team-leading 83 in testing conditions on a pitch conducive to spin.

Bangladesh lost Liton Das (16) - promoted to open - early on, to a contentious catch at short cover. Hashmatullah Shahidi, diving forward, claimed the catch close to the turf, but had it bounced on its way in? The soft signal on the field was out and third umpire is Aleem Dar didn't see anything conclusive to overturn the decision.

Tamim Iqbal (36) and Shakib rebuilt nicely, until the former was bowled when exposing his stumps, looking to cut Mohammad Nabi (1-44) on the back foot to a ball that skidded on.

Shakib kicked on through to a third half century for the tournament, seeing him back top as the tournament's leading run-scorer with 476, but a third century proved out of reach as he was trapped lbw by the impressive Mujeeb.

It was one of two strikes in as many overs by the offspinner - Soumya Sarkar (3) dismissed in identical fashion - that threatened to derail the Bangladesh innings.

But Mushfiqur, supported handily by a limited Mahmudullah (27) - who was struggling with a calf complaint - and Mosaddek Hossain (35), helped the Tigers up to a testing score of 262.

In reply, Bangladesh's seamers were again toothless in the first 10 overs, but the introduction of Shakib in the 11th immediately brought a wicket as Rahmat Shah plinked an attempted pull straight to the man at mid-on.

Mosaddek found some sharp turn to dismiss Hashmatullah Shahidi (11), stumped, before handing over to Shakib once more to steal the show - the talismanic all-rounder claiming four of the next five wickets to fall, including the key strikes of Gulbadin and Mohammad Nabi, for a duck, in the space of three balls.

When Shakib picked up Najibullah Zadran (23) in the 43rd over, it clinched the first five-for by a Bangladesh bowler in a World Cup and it saw him join Yuvraj Singh as the only player to who have scored a fifty and taken five wickets in the same World Cup match.

Mustafizur Rahman (2-32) then impressively ran through the Afghanistan tail to clinch a comprehensive victory and pile the pressure on England ahead of their game on Tuesday.