All-rounder Sam Curran impressing for England in T20 as he looks to nail down spot in the XI; 22-year-old has taken his excellent form from the IPL into international arena; watch England's third T20 against India live on Sky Sports from 1pm on Tuesday

Come in, perform well, and then drop out when everyone else is available, fit and in form. The consistent performer who hasn't quite been able to nail down a consistent place.

When it comes to T20, however, that may be about to change.

The all-rounder has played in England's last five T20 internationals and been mightily impressive in the bulk of them, including in Sunday's seven-wicket defeat to India in Ahmedabad.

While his brother Tom, Chris Jordan and Ben Stokes were being carted for 81 runs from their 5.5 overs combined, Sam picked up 1-22 from his four, shipping just two boundaries from his 24 balls.

The left-armer dismissed India opener KL Rahul in the first over of the run chase with the final ball of an excellent wicket-maiden. Curran had generated early swing to the right-hander but went on to remove Rahul caught behind by Jos Buttler with a ball that angled across him.

For the rest of his spell, Curran mixed full deliveries with pace-off balls and bouncers as Virat Kohli, Ishan Kishan and Rishabh Pant struggled to whack him. Kishan and Pant managing just one four apiece off the 22-year-old. 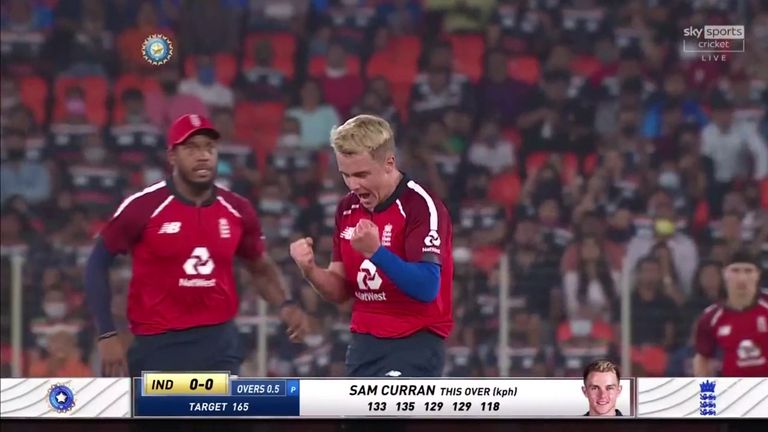 Curran's performance followed a reasonable return of 0-15 from two overs in the first T20I, when an excellent all-round bowling display from England limited India to 124-7, and career-best T20I figures of 3-28 during the 3-0 sweep over South Africa in November 2020.

On that day in Cape Town, Curran once again struck in his first over - Temba Bavuma out on the scoop - before returning in the middle overs to remove Faf du Plessis with a pace-off short ball and then closing out his allotted four overs by ousting Heinrich Klaasen with a bouncer.

A left-armer who can swing it up front and then produce ample variations later on, not to mention give the ball a thump with the bat down the order. Sounds like someone you want in your T20 side.

The consensus coming into the series was that Curran and off-spinning all-rounder Moeen Ali were vying for one spot at No 7 and, yes, if England are presented with pitches that turn then Curran could be the fall guy, with Moeen returning to partner Adil Rashid and giving England double spin.

That could even be as early as Tuesday with England captain Eoin Morgan saying in his post-match press conference after the second T20 that the fact the third will be played on a red-soil pitch as opposed to a black-soil surface means it may break up and offer more assistance to the spinners.

But, after an impressive run of performances, Curran would be pretty confident of retaining his place, certainly ahead of brother Tom - who conceded 26 runs from two overs on Sunday and is averaging 71 and going at an economy rate of 11.83 in four T20Is this winter - and maybe even ahead of Mark Wood, who missed the weekend's fixture with a bruised heel.

Sam Curran's surge into England's T20 side came after a fine showing for Chennai Super Kings in the 2020 Indian Premier League in the UAE.

Amid a disappointing campaign for the team - CSK failed to reach the play-offs for the first time in their history - Curran took 13 wickets at an economy rate of 8.19 and scored 186 runs, including one fifty, as he spent some time in the tournament opening the batting.

"I definitely felt I came back a much better player from the IPL last year," Curran said ahead of the ongoing T20 international series in India.

"I did various roles and got challenged in different ways, which I really enjoyed. I think it's benefitted my game."

Chennai were certainly impressed enough to retain Curran for the 2021 IPL, while CSK captain MS Dhoni also spoke in glowing terms about him.

Dhoni said: "Curran is a complete cricketer for us. You need that seaming all-rounder. He strikes the ball nicely, he can bat up the order, he plays spinners well. He can give us those 15-45 runs if you need momentum."

The fact the entire 2021 IPL will be played in India will allow Curran to further get to grips with conditions he is likely to face in the T20 World Cup in the same country later this year.

Just like with England, he could be vying with Moeen for a place in the Chennai XI, with Super Kings having acquired Ali for the kingly sum of £700k during February's IPL auction.

That is some competition for the four overseas slots but after his exploits in 2020, Curran will hope to begin the tournament in Chennai's preferred XI, impress again and cement what looks like a pretty secure place in England's 15-man squad for the T20 World Cup.

If he carries on as he is, it would be no surprise to see him in Morgan's first XI when England begin their bid to become dual white-ball world champions.

Watch England's third T20 against India, in Ahmedabad, live from 1pm on Tuesday on Sky Sports Cricket and Sky Sports Main Event. You will also be able to follow text commentary and in-play clips through our live blog on skysports.com and the Sky Sports app.