Batsman Feroze Khushi sprayed with beer; Essex admit celebrations failed to meet their inclusive values and pledge to do more

Essex captain Tom Westley has apologised after alcohol was poured over a Muslim player as the team celebrated their Bob Willis Trophy win.

Batsman Feroze Khushi, who was 12th man during the final against Somerset, was photographed recoiling as beer was poured over him on the balcony at Lord's.

His club admitted the celebrations failed to meet their inclusive values and pledged to do more, while Essex captain Westley issued an apology. 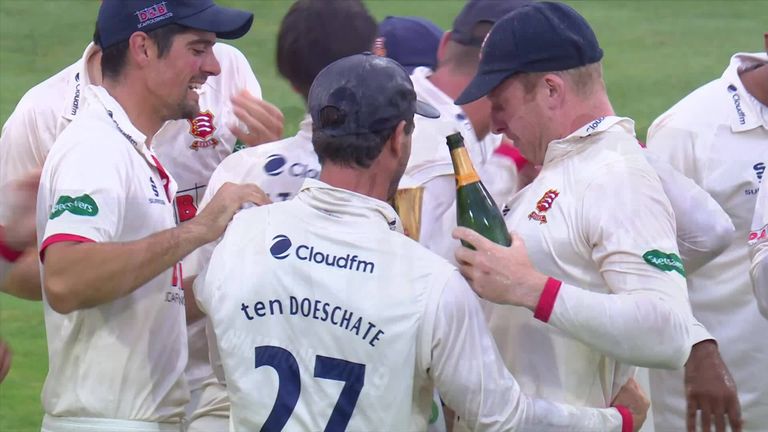 "On behalf of myself and the team, we would like to apologise for any offence that was caused during our celebrations at Lord's on Sunday," Westley said on Tuesday.

"At Essex, we believe we have built a strong dressing room culture that supports one another both on and off the field.

"As a group, we have come together today and discussed the event and, on reflection, we are disappointed that we let this happen.

"Moving forwards, the squad will be more responsible and aware of our actions, and will continue to learn and develop with the help of the ECB and the Professional Cricketers' Association."

A PCA statement read: "Since being made aware of the events that occurred on the Lord's balcony on Sunday evening, the PCA has been in regular contact with the Essex squad and provided support to its members.

"The players have discussed the incident and the PCA supports the statement from the Essex captain Tom Westley.

"The PCA's role is to champion the ongoing interests of professional cricketers in England and Wales and this includes supporting players involved in the incident following the Bob Willis Trophy Final.

"Earlier this summer in the wake of the BLM (Black Lives Matter) movement, the PCA identified two main areas of focus in Equality, Diversity, Inclusion (EDI), education and working with the ECB to improve reporting mechanisms and putting processes in place in the professional game.

"The post match events at Lord's this week underline the need for increased awareness and education.

"In recent months the PCA has formed an EDI project working group, including current and former professional players and is committed to change, not only across racial equality but any discrimination, to ensure professional cricket is a game that is accessible and that is inclusive for all."

Meanwhile, a statement from Essex said: "Essex County Cricket Club prides themselves on their work within multi-diverse communities throughout the county and the surrounding areas.

"For a substantial period of time, Essex have had a multi-diverse team with players from different backgrounds, religions, and races, where cricket is at the heart of these communities.

"The club has worked extremely hard and will continue to bring cricket to anybody and everybody, and educate on diversity, but further work needs to be done across both sport and society in general, to widen people's knowledge and make them more aware of cultural differences."

Essex reasserted their status as the leading side in English cricket's red-ball format by claiming the inaugural Bob Willis Trophy after a five-day draw was settled on first-innings runs.

The Chelmsford side are the reigning county champions, having also taken the honour in 2017, and now have a third red-ball title in four years.

Although 21-year-old Khushi did not feature in the final, he made four appearances during the group stage.