The Darts Show Podcast: Adrian Lewis on his row with Peter Wright and why he is a fan of Fallon Sherrock

Adrian Lewis talks to Michael Bridge and Colin 'Jaws' Lloyd about his bust-up with Peter Wright at the Players Championship Finals, while the former two-time World Champion joins the clamour for Fallon Sherrock to join next year's Premier League

'Jackpot' Adrian Lewis has opened up about his argument with Peter Wright at the Players Championship Finals, and why he thinks Fallon Sherrock is a "breath of fresh air".

Lewis accused Wright of being a "cheat" after he was beaten by the Scot in the second round of the Players Championship Finals on Saturday.

Following Wright's 6-5 victory in Minehead, a heated exchange took place between the two players while they were still on stage, with Lewis having to be being led away by a member of security staff.

The Stoke-on-Trent thrower later took to social media to explain that the altercation took place because of a loose floorboard.

He said to me their was a loose floorboard and I found it! So my response to him was you took me out my rhythm, you had a game plan, and as world number2 its disgraceful and your nothing but a cheat. He knew what he was doing as soon as I went 3-1 up he started muttering things

It makes me giggle what some of the people on here are saying. I've been in this sport nearly 20 yrs and only had a fall out with 3 or 4 players over that period of time. So I think I've done quite well considering 🤣 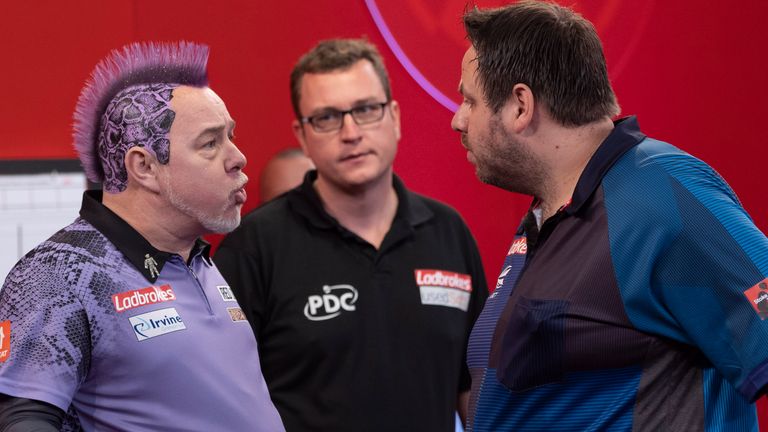 "I'll just put it behind me now"

Lewis on his argument with Wright in Minehead

Asked whether he has had an opportunity to speak to the eventual winner of the tournament in Minehead, Lewis said: "No, not yet. No. I'll see him probably at the Worlds or just after."

He added: "I'll just put it behind me now. I'm looking forward to the World Championship. That's the biggest one of the lot. So if I can do some damage at that, that will rectify what's just happened in this one."

Lewis is lingering down at world No 34 after a drop in the rankings, but he is determined to rekindle the kind of form which led him to glory at Alexandra Palace almost 10 years ago now.

"The sharpness isn't quite where it should be," said Lewis. "Sometimes when I'm up there, I feel I'm untouchable when I'm knocking in 110-plus averages. I feel like, 'yeah, that's it. I'm back'. And then the next game, I'll average around a ton. And I'll have one little blip where I'll average 95, and lose."

Looking ahead to the Worlds, Lewis has been drawn to face Canada's Matt Campbell in the first round with a potential blockbuster clash against Gary Anderson awaiting the winner.

"Whoever you play, they're all going to be a tough match, aren't they? At the end of the day, it's the World Championship. You're under enough pressure as it is. You don't even think about the opponent - you're just thinking about going up there and trying to get the job done," said the 36-year-old.

He continued: "I don't think you can rest on your laurels. I think you've got to go up there and [think] 'it's a brand new tournament, it's a new year, it's a new beginning'. You've got to try and knuckle down. If you do well in this, you're back in everything next year. So that's how I'm looking at it right now."

Lewis, who was a protégé of 16-time world champion Phil Taylor, has also backed 'The Queen of the Palace' Sherrock for a place in next year's Premier League following a clamour of support for the 27-year-old Buckinghamshire thrower.

"I think she's been a breath of fresh air, I do," said Lewis. "I think, looking back over the last few years, apart from Gerwyn Price coming through I don't think they have the characters there as much now. With her coming through, yeah I think it would be a good addition personally."