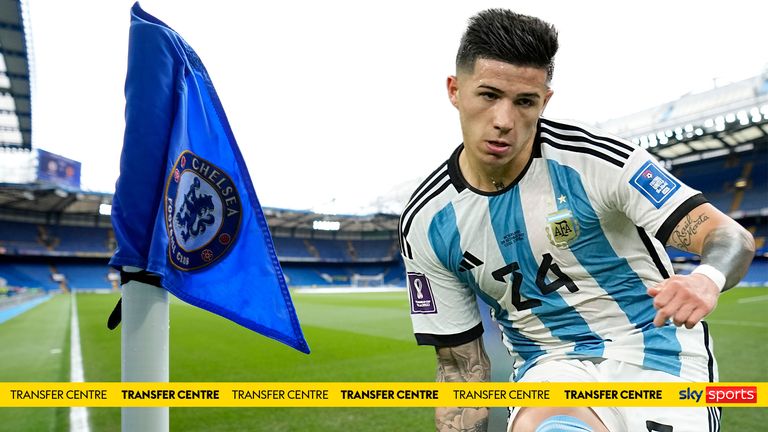 Sky Sports News chief reporter Kaveh Solhekol has the latest on Chelsea and their transfer targets, including Benfica and Argentina midfielder Enzo Fernandez

Chelsea are determined to sign a midfielder and right-back this month, despite already spending almost £500m on new players this season.

The Blues have signed 16 players since Todd Boehly's consortium purchased the club last summer, but remain keen to add to head coach Graham Potter's squad during the January window.

Enzo Fernandez is still a target and Chelsea are considering making a new bid for the Benfica and Argentina midfielder.

The west London club tried to sign Fernandez earlier this month, but talks stalled after Benfica insisted he could only leave if his £106m release clause was paid.

Chelsea have tried to negotiate a lower fee and are keen to send players on loan to the Portuguese side as part of the deal.

Fernandez was desperate to move to Chelsea at the start of January, but he is back playing regularly for Benfica after being dropped for one game.

The 22-year-old is in line for a big pay rise if he moves, but Benfica have been trying to get him to sign a new contract as they anticipate clubs such as Real Madrid and Barcelona will try to sign him in the summer.

Benfica boss Roger Schmidt criticised Chelsea's behaviour in their bid to sign Fernandez earlier this month, saying: "There is a club that wants him, they tried to attract him, but they know that they can only have him if they pay the clause.

"It's disrespectful to all of us, to Benfica. They're driving the player crazy. They pretend they want to pay the clause and then they want to negotiate."

With question marks over the long-term futures of Jorginho and N'Golo Kante - whose contracts expire at the end of the season - Chelsea want to sign at least one midfielder.

Although Chelsea can afford to pay Fernandez's £106m release clause, doing so would impact their ability to comply with Premier League and UEFA financial fair play rules.

Liverpool are one of two other Premier League sides that have not given up hope of signing Caicedo in January, although Brighton are under no pressure to sell the Ecuador international this month, given his contract expires in the summer of 2025.

Liverpool are also keen on Bellingham and have made him their top summer target, according to Sky Germany, who report that Dortmund are already preparing for the England international's exit at the end of the season.

Rice spent time in Chelsea's academy before being released at the age of 14, but quickly joined London rivals West Ham and has gone on to spend his entire professional career at the club.

As well as a new midfielder, Chelsea also want to strengthen in defence, with a young right-back being targeted to provide cover for Reece James.

The Blues are in talks with Lyon for Malo Gusto, but the French side want to keep the 19-year-old until at least the summer.

However, Chelsea want a deal now as they are aware other clubs - such as Manchester United and Tottenham - are interested in the France U21 international.

James has played just once for Chelsea since October 11 due to a knee injury, with the sole appearance - against Bournemouth last month - seeing him aggravate the issue and return to the sidelines.

The England international also missed several months of the 2021/22 season with a hamstring injury.