Nicolas Colsaerts gave himself a huge lift in his bid to retain his European Tour card after he earned a share of the halfway lead at the Amundi Open de France.

Colsaerts arrived at Le Golf National ranked 114th on the Race to Dubai, four places outside the cut-off mark to retain full playing rights for next season, with just this week's event and next week's Portugal Masters remaining in the 2019 campaign.

But the Belgian defied the pressure and the cool conditions over the Albatross course to fire a high-quality 66 and reach nine under, although he cost himself the outright lead heading into the weekend when he pulled a long-iron into the water at the last and was unable to save par.

Colsaerts is tied at the top with South African George Coetzee, who birdied his final hole to post a 68, while Richie Ramsay (69) is just two strokes behind and two-time major champion Martin Kaymer is also in contention on five under par.

Former Ryder Cup star Colsaerts, who is without a European Tour win since the Volvo World Match Play in 2012, struggled to make much happen in a blustery front nine before he suddenly vaulted into the outright lead with five birdies in six holes after the turn.

But the 36-year-old pulled his tee-shot too far left at the last, and had to settled for a bogey and a 66. He admitted he was happy to see the wind drop as he made the turn, which made the inward half more comfortable for the players.

"It was really hard when we started," he said. "The front nine was pretty difficult as it was blowing pretty hard and from a slightly different direction than yesterday. Then it sort of calmed down a little bit on the back nine.

"I made a few long putts that gave me momentum into the back nine, which was nice, and then the rest was free-flowing. So yeah, pretty happy with the way I ended these first two rounds."

Coetzee was out in the final group of the day from the 10th tee, and he made a good start with a birdie at 10 before he followed a bogey at 13 with a double-bogey at the short 16th after he rinsed his initial tee shot.

But he was another to put together a sustained burst of scoring on the front nine as he birdied five of the first six holes and then atoned for a bogey at eight with another birdie at nine to cap a 68 and secure a share of the clubhouse lead with Colsaerts.

Many felt Kurt Kitayama would be hard to catch after the in-form American returned a 68 to set the early target at eight under, while Ramsay would have been closer to the leaders had it not been for a poor start, and finish, to his 69.

The veteran Scot made only one par on the front nine, which he began with a double-bogey six before mixing five birdies with two bogeys in a colourful, outward 35, but Ramsay then enjoyed a steady run of pars before picking up shots at 14 and 15, only to err again at the last to slip to seven under. 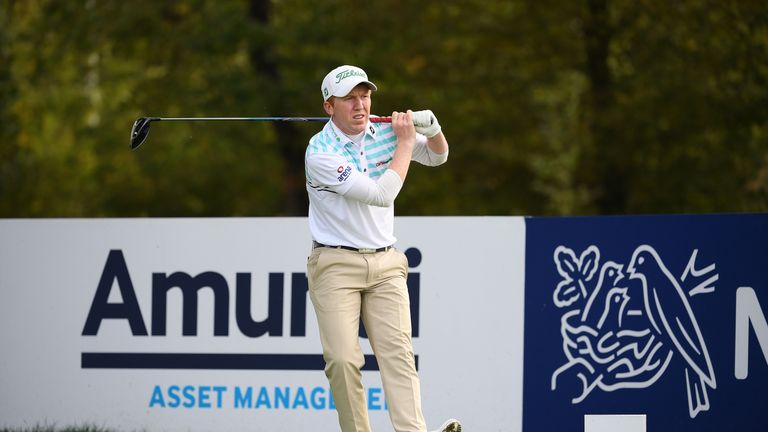 Kaymer offset six birdies with four bogeys in an erratic 69 which leaves him nicely placed on five under as he chases his first win since the 2014 US Open, and he is level with the luckless Gavin Moynihan, who endured a tough break on the par-three 16th.

The Irishman, languishing at 162nd on the Race to Dubai, thought he had won a BMW i8, worth over £130,000, when his arrow-straight eight-iron pitched in the hole, but his ball bounced out of the cup and settled towards the back of the green.

Meanwhile, the round of the day belonged to visiting American Hudson Swafford, whose 65 featured a course-record three eagles and four birdies but also four dropped shots.