"If we play like we did this week, the score will look the same over there in a couple of years, and that's what we're here for," states Jordan Spieth as USA team-mate Bryson DeChambeau says "we are going to be doing some incredible things moving forward"

Jordan Spieth has warned Europe that the United States still have some unfinished business in the Ryder Cup despite their 19-9 demolition job at Whistling Straits.

Spieth was a member of the USA teams beaten in 2014 at Gleneagles and in 2018 at Le Golf National and he wants this new-look team to prove themselves further by inflicting another heavy defeat on Europe away from home in Rome in 2023.

He said: "I think that this is unfinished business. I think this was one of those first wins - we needed to win this one and I think it was a massive stepping stone for this team and the group that we have here that have really known each other since almost back to grade school to continue to try to work hard to be on these teams to go over there.

"It's one thing to win it over here and it is a lot easier to do so and it is harder to win over there. If we play like we did this week, the score will look the same over there in a couple of years, and that's what we're here for."

Bryson DeChambeau also believes there is much more to come from this American side after enjoying "the coolest experience of his career" as a member of Steve Stricker's victorious team. 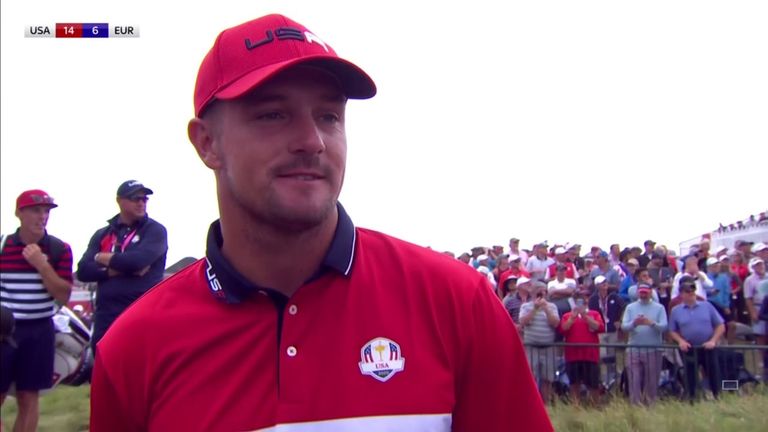 "I felt like as a whole we came together and did something amazing," he said. "This is a start to a new generation. I think we are going to be doing some incredible things moving forward.

"I'll tell you, from winning the Ryder Cup, this is possibly way better than any tournament I've won in my entire life, the group of people, the collective game of golf, it's so much bigger than just a singular tournament. It's about people coming together and doing something special for the game of golf.

"And I couldn't be more proud of Captain Strick and everybody putting their hearts out and making it the coolest experience I've ever had in my golf career."

Like Spieth and DeChambeau, Tony Finau was a member of the USA team to endure the European celebrations in Paris three years and he was a much happier man this time around.

"Oh, this one's a lot better. I like winning," he said. "The one in Paris, I think I was quoted before this Ryder Cup started. You know, I think we were all standing on that green, and we had - I know they changed the culture of what that looks like now when you lose, because the Europeans weren't there watching us celebrate, but in Paris we were right there watching them celebrate. They must have changed that.

"But I knew at that point, I wanted to be on this team, and it just makes it that much more sweet I think when you experience something like that; and then now you're able to enjoy something like this even more.