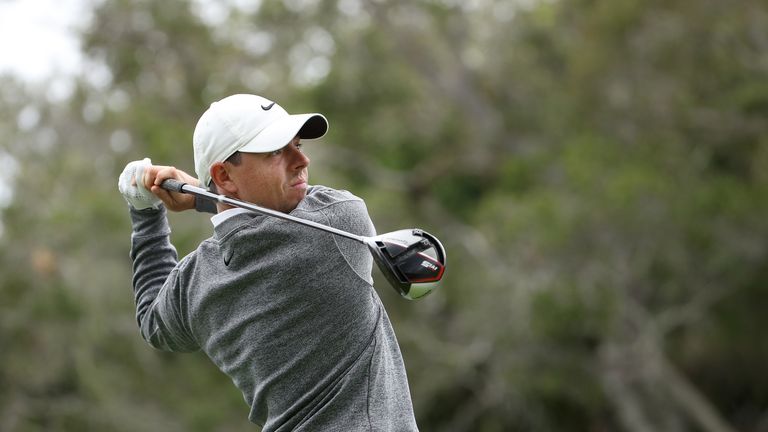 Rory McIlroy bounced back from a torrid spell on the back nine to revive his hopes of a first major victory in almost five years at the US Open.

McIlroy cruised to the turn in two under with short-range birdies at the fourth and seventh, and he picked up another shot with a putt from just inside 20 feet at the 11th to get within a shot of the lead before his iron game began to misfire.

The 2011 champion did well to save par from 20 feet at the 12th, but his run of 29 holes without a bogey came to an abrupt halt when he dumped his approach into a bunker at 13, splashed out to seven feet and missed the putt on the high side.

But worse was to follow at the long 14th when he made a huge mistake with wedge in hand for his third as his ball spun back off the front of the green to leave a tricky pitch over the front trap.

Relive the Friday action from the 119th US Open at Pebble Beach.

McIlroy compounded the error with a fluffed chip into the sand, and he was unable to get up and down as he ran up an ugly double-bogey seven which saw him plummet back to level par for the day.

Another blemish looked likely when he tugged a three-wood into a fairway bunker at the 15th, but he regrouped and clipped a superb nine-iron to five feet which he converted for a priceless birdie, and he made it two in a row with a perfect putt from the rear fringe at the next.

He missed out on a hat-trick following a bold tee shot to the tough 17th, and he scrapped his way to a par at the last to card a 69 remain at five under - completing 36 holes without a birdie at any of the par-fives.

But his insisted he was "really happy" with his position going into the weekend as he celebrated making the cut in the US Open for the first time since 2015.

"It was very important to do all that hard work over the first 12 holes, and then to lose it in two holes on 13 and 14 was disappointing," he said. "On 13, I wasn't disciplined enough with my second shot. I was trying to hit something into that back right corner of the green when I've really been preaching middle of the greens all week.

"I was feeling good about myself, six under par and felt like I could squeeze a couple more out of the round and maybe get the lead going into the weekend. I bogeyed that, which is fine, you're going to make some bogeys around here.

"But the wedge shot on 14. I hit a club that I knew could pitch pin-high, but probably not very much further than pin-high, and then anything right of that pin, pitching there is going to come off the green. When you're standing there with a wedge in your hand, the ball is above your feet on the fairway, you don't really want it going left.

"So I was guarding against that, and I probably missed by four or five yards right of where I needed to. And it came back down the hill, and then you're in an awkward spot, you're trying to play a very precise shot to get it close to the hole to save your par, and that didn't go to plan. It just sort of compounded the error with another error.

"But I bounced back well. I didn't hit a great tee shot off 15, but the bunker shot turned everything around. It was nice to see a shot like that and roll the putt for birdie. And then it was sort of a bonus holing from the back of 16, as well.

"I said to myself going into the 14th I want to get those shots back that I just lost. I didn't quite get those three shots back, but two under for the last four after what happened, I'm very pleased with. I'm really happy with my position going into the weekend.