The Italians pounced on the British team's mistakes to secure both races on the second day. The PRADA Cup Final now pauses as Auckland enters a 72-hour lockdown; further statements will be made from the organisers regarding the impact to the schedule in due course

Luna Rossa Prada Pirelli maintained their hold on the PRADA Cup Final with two more victories on Sunday, after mistakes proved to be costly for INEOS TEAM UK.

The Italian outfit went into the second day of competition off the back of two victories on Saturday, while INEOS TEAM UK knew that they needed race wins, and they needed them quickly.

The PRADA Cup is a first-to-seven-wins series, with one only challenger progressing into the 36th America's Cup match against Emirates Team New Zealand.

After two days of racing, the Italians are very much in the driving seat, however, both must wait to know more about the forthcoming schedule.

The next planned raced day, on Wednesday, has been postponed due to the New Zealand government announcing a level three 72-hour lockdown. The organisers of the America's Cup are working with the authorities to determine what this will mean for the competition and its schedule.

Statement on behalf of ACE

As a result of the Government announcement of a Level 3 lockdown in Auckland, initially for 72 hours, the next scheduled race day on Wednesday has been postponed and the event village will not be open to the public during this time. pic.twitter.com/Okc2gVryxd

After the PRADA Cup final started in the backdrop of lighter winds, Sunday's 16-20 knots were welcome, particularly from a British perspective because their lighter-air performance is an Achilles heel.

Course E, often described as the 'back paddock', was selected by the race organisers and with both boats looking pretty even on performance in those conditions, two tense and close races were expected.

On Saturday, Sir Ben Ainslie had told Sky Sports that they needed to "really get stuck in" and push hard in order to claw back the advantage they had given Luna Rossa.

"They certainly had some good pace," he concluded. "We've just got to sail better, push harder and we're probably going to have to take more risks if we're going to beat them."

On Saturday, the importance of getting the pre-start right was shown and once again, it proved pivotal during Sunday's opening race.

The pre-start is the two-minute period in which both teams tussle for the best position possible, and route over the start line, when the clock reaches 0:00.

INEOS TEAM UK tried to put Luna Rossa off their course and gain the advantage, however, a late attempt to hook didn't pay off. Instead, the Italians edged over the start line first and then developed a nine-second lead at the top mark. 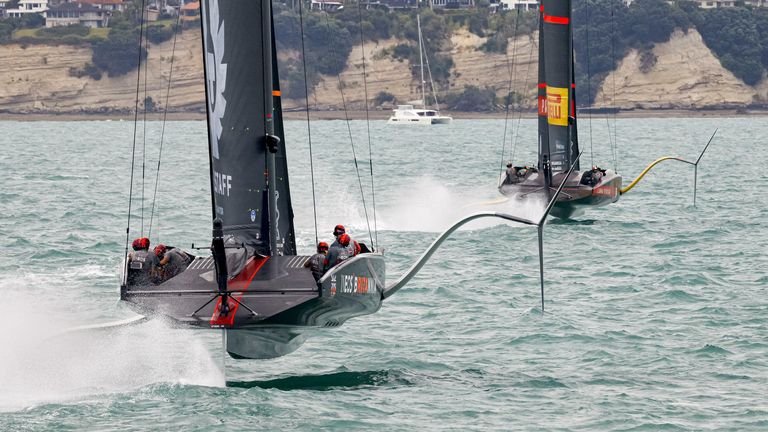 We made a mess of the start, we just got a bit greedy going for the hook as we thought it was on for a split second. In these match race starts, you can go from hero to zero pretty quickly. We got that one wrong but after that, we sailed a good race.

A classic match race followed as two exceptional race boats and teams showed exactly what they were made of. The grinders on both teams were working flat out to provide maximum power and the wealth of manoeuvres showed off these incredible AC75s at their best.

A margin between the two remained, though, and over the course of the six legs, Luna Rossa protected their favoured side of the course well and sailed with the fluidity they'd showed during Saturday's racing.

"It was probably the first real match race that we've seen so far," Francesco Bruni, Luna Rossa Prada Pirelli's co-helmsman, said on board after.

"We are super happy with one more win, but we can see how the English are not easy to beat.

In the second race of the day, once again INEOS TEAM UK went for it during the pre-start.

Once again, their execution let them down as they tried an aggressive move to pressure the Italians. They turned hard and fast, but it caused BRITANNIA to lift high up out of the water and then splash down.

As a result, the British outfit lost their initial speed and momentum, while the Italians kept their foot to the floor and raced towards the start line.

Once racing, the difference in boat speed was minimal, however, with the confidence of their own solid start, the Italians directed proceedings and ultimately came away with a 41-second victory.

"I thought that the boys sailed well, today's racing was all about getting off the line in front, which we did a great job of," Jimmy Spithill, Luna Rossa Prada Pirelli's co-helmsman, said after the second race.

"It was a foot on the throat approach. The boys on the handles [the grinders] did an outstanding job; tack-for-tack, we were just gaining every time. Very happy with the lads on the handles today.

"The scoreline doesn't reflect how close it is, you're just a split-second away from a mistake that can really end it. We definitely made a few today that we've got to sharpen up on, but we're not thinking at all about the scoreline. We'll just take it race by race and day by day."

Watch every moment of the America's Cup challenge, live on Sky Sports.