NFL Draft 2021: Selections, prospects; plus, will anyone not named Trevor Lawrence be No 1 pick? 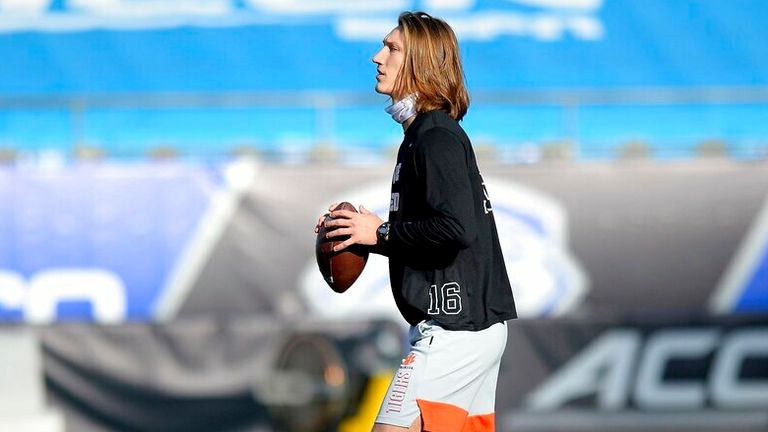 Watch as Clemson quarterback Trevor Lawrence is put through his paces at his pro day.

Scouts will tell you it's Draft season 365 days a year as they wear out the 'rewind' button and rack up the miles travelling to all corners of the country in order to study every throw, every catch, every tackle, every sack and every interception made by an NFL prospect.

Draft week remains a special part of the sporting calendar as dreams dating back to pre-school come true and hundreds of players with different background stories make the transition from college graduate to NFL professional.

The NFL has had only two drafts in which QBs went 1-2-3 [1999: Couch, McNabb, Smith; and 1971: Plunkett, Manning, Pastorini]. It has never had QBs taken with the first four picks of a draft, but I believe that changes this year. We shall see.

Whether it's your first draft or your 20th, Sky Sports promises to cater to all as we provide live coverage of all three days.

Here's a guide on what to look out for...

A return to normality

Plans for a 2020 NFL Draft extravaganza in Las Vegas had included a lavish floating stage on the water of the Fountains of the Bellagio, where players would be transported by boat upon hearing their name called. Instead, NFL commissioner Roger Goodell announced the picks from the basement of his house as the Draft adopted an entirely virtual set-up due to the coronavirus pandemic.

The insight into the 'work from home' war rooms of head coaches and general managers brought a unique and personal dynamic, particularly when it came to Bill Belichick's dog 'Nike' stealing the show, while there was something touching about prospects receiving the life-changing call while surrounded by their closest family and friends in their own living room.

The NFL's star-studded Draft-A-Thon was meanwhile an outstanding way of raising money to help provide relief for those impacted by COVID-19, be it front line workers or those who suffered from the virus.

Goodell hosted the NFL Draft from his home last year

One year on, a continued worldwide effort to protect people from the coronavirus means the Draft is able to return to a more familiar pre-COVID look in what will represent a reassuring step towards the normal we previously knew.

This year's event will be hosted at various locations across downtown Cleveland, including FirstEnergy Stadium, the Rock & Roll Hall of Fame and the Great Lakes Science Center, with Round 1 due to take place on Thursday April 29, followed by Rounds 2 and 3 on April 30 before Rounds 4-7 wrap up the process on May 1.

A selection of this year's prospects will be present to join Goodell on stage, while others will take part remotely as the NFL builds on the success of last year's virtual approach.

Team personnel are permitted to come together in a draft room at a location of their choosing, and the NFL will also allow vaccinated individuals chosen by each of the 32 teams to have a front-row seat to the main stage.

The picks - and some early trade shenanigans

The Jacksonville Jaguars occupy the No 1 overall pick after finishing the 2020 season with a league-worst 1-15 record, followed by the New York Jets at No 2 on the back of their 2-14 campaign.

With 11 apiece the Philadelphia Eagles and Minnesota Vikings currently own the most selections, while the Seattle Seahawks have the fewest with just four at their disposal.

The San Francisco 49ers, Rams, Baltimore Ravens and New Orleans Saints were all rewarded with 2021 and 2022 third-round picks, as well as a 2023 third-round pick for the 49ers, for developing minority candidates for head coach and/or general manager positions - a result of the 2020 Resolution JC-2A.

San Francisco have since traded away that 2022 third-round pick alongside the No 12 overall pick, a 2022 first-round pick and a 2023 first-round pick in exchange for the Miami Dolphins' No 3 pick, sparking uncertainty over the future of quarterback Jimmy Garoppolo.

Following on from that, the Dolphins traded the No 12 pick, No 123 pick, and a 2022 first-round pick to the Philadelphia Eagles in exchange for the No 6 pick and No 156 pick.

Blockbuster deal with massive ramifications for years to come. pic.twitter.com/nRLMUaWGo5

Miami remain one of three teams along with the Jets and Jaguars with two first-round picks each. In contrast, the Seahawks, Texans and Los Angeles Rams are currently without first-round picks, in fact, the Rams haven't made a first-round selection since making Jared Goff the No 1 overall pick in 2016.

The 259 total selections also include 37 compensatory picks, which are handed out based on teams that lost free agents in the previous offseason. On this occasion, the New England Patriots possess the highest compensatory pick at 96th overall based on quarterback Tom Brady's salary and time on the field prior to his departure after 20 years.

In an exclusive interview, Pro Football Hall of Famer Warren Moon charts the rise of the black quarterback and recalls his experience with racism on the road to stardom.

With the first overall pick...

'The Jacksonville Jaguars select Trevor Lawrence, quarterback, Clemson'. Most would put their life savings on Goodell uttering those words. 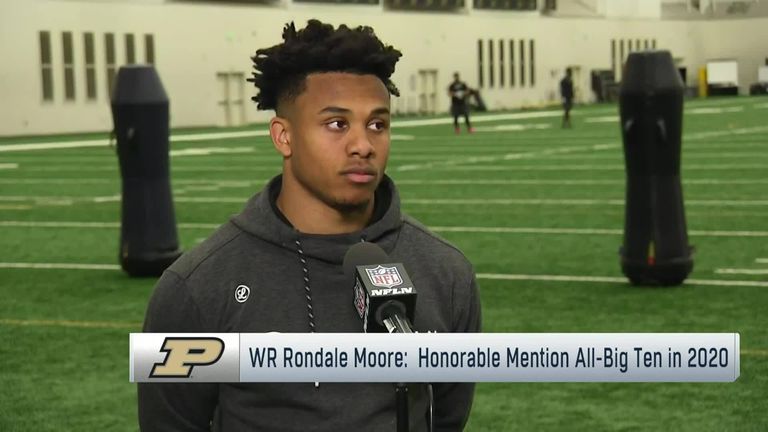 Lawrence has arguably been the consensus No 1 overall pick since the moment he stepped out to make his Clemson debut against the Furman Paladins in 2018, and is widely deemed the most accomplished quarterback prospect since Andrew Luck, who was drafted out of Stanford first overall by the Indianapolis Colts in 2012.

If you were to design your ideal quarterback in a lab, it would probably be a lot like Trevor Lawrence. Six-foot-six, outstanding football IQ, born leader, can make every throw, an incredible athlete capable of devastation outside the pocket, three years of experience as starter for one of the top college programmes.

It's really beyond Lawrence and the Jags where things get particularly interesting on the quarterback front.

"That's the throw of the Pro Day season right now."

BYU's Zach Wilson, Ohio State's Justin Fields, North Dakota State's Trey Lance and a fast-rising Mac Jones could all fall inside the top 10, with the Jets, Atlanta Falcons, Carolina Panthers, Denver Broncos and maybe even the Philadelphia Eagles among those potentially seeking new men under center.

Lance has emerged as a particularly intriguing case study having started just 17 games of college football in his career while beyond that Texas A&M's Kellen Mond, Stanford's Davis Mills, Georgia's Jamie Newman and Florida's Kyle Trask are among the best of the rest.

Everybody loves the skill position players, the guys that produce the highlight reel moments whether it be a stunning one-handed catch, a jaw-dropping hurdle or exquisite footwork to leave a defender with twisted ankles.

Miss out on one those three? Fear not. You could still land a Rashod Bateman (Minnesota), a Kadarius Toney (Florida), a Terrace Marshall (LSU), a Rondale Moore (Purdue), a Dyami Brown (North Carolina), an Elijah Moore (Ole Miss), a Tutu Atwell (Louisville), an Amon-Ra St. Brown (USC), a Nico Collins (Michigan), a Tylan Wallace (Oklahoma State), a D'Wayne Eskridge (Western Michigan). The list goes on and on. It's not a bad year to be in need of a receiver.

And then there is Kyle Pitts, the mesmeric Florida tight end charming NFL teams as a matchup nightmare with frightening downfield speed, route-running and contested catch ability. Beyond the quarterbacks he might be the first player off the board. We'll see.

The value of drafting running backs early is a subject up for growing debate, but in Alabama's Najee Harris and Clemson's Travis Etienne you have two strong contenders to fall in the first round. As history shows, teams won't have a hard time finding backfield production beyond the first 32 picks, with Memphis' Kenneth Gainwell, North Carolina tandem Javonte Williams and Michael Carter, Oklahoma's Rhamondre Stevenson and Ohio State's Trey Sermon among those also up for grabs.

Day one is important, but Drafts can be won and lost from round three onwards as scouting and research is put to the test. Perhaps that's Wilson's BYU receiver Dax Milne? Or Boston College tight end Hunter Long? Maybe it's Alcorn State defensive back Qwynnterrio Cole?

This is where it gets really fun - the trades!

Teams have the opportunity to offer up picks to other teams should they wish to move up the board in a bid to land a player of interest and as we've seen movement has already been made.

The Chicago Bears famously traded away a third-round pick, a fourth-round pick and a 2018 third-round pick to move from No 3 overall to No 2 overall and draft quarterback Mitchell Trubisky in 2017, overlooking the Houston Texans' Deshaun Watson and the Kansas City Chiefs' Patrick Mahomes in the process.

Trades can also work out for the best. Look at the 49ers, who sent second and third-round picks to the Patriots in 1985 to move up from the 28th pick to No 16 to draft wide receiver Jerry Rice, who went on to become a three-time Super Bowl champion and 13-time Pro Bowl selection.

Seven-time Super Bowl champion Tom Brady was the 199th overall pick in round six of the 2000 draft. Shannon Sharpe won three Super Bowl rings after being selected 192nd overall in round seven of the 1990 draft by the Denver Broncos. In a more recent case, the Dallas Cowboys found their franchise quarterback in Dak Prescott with pick No 135 in round four of the 2016 draft.

The Draft is very much a lottery, but look closely enough and stick with us for the duration and you might uncover a star.

Yep, we have a dedicated channel to bring you all of the action, with additional programming from our friends at NBC and NFL Network.

From Monday April 26, Sky Sports NFL will replace Sky Sports Action and will run through until Friday May 7, giving you plenty of time to build-up to the Draft and react to it as well.

Inside the Huddle will have a full preview show on Tuesday, with a review of the whole extravaganza on Monday May 3 plus for the first time ever we'll have our own Sky Sports build-up show from 8pm on Thursday April 29. Neil Reynolds will lead our coverage with a host of guest contributors as we take you up to 11pm and the red carpet arrivals where we hand over to Rich Eisen, Daniel Jeremiah and the NFL Network team who will build-up to the first overall pick.

The Jags will be on the clock at 1am - and you'll have all the information you need that to a host of programming that will feature DJ's Live Mock Draft, Path to the Draft, Move the Sticks specials on the names expected to go at the top of the Draft.

They'll be more from Total Access, Good Morning Football and Pro Football Talk who will all offer their unique take on the talent available and the news leading up to Thursday night in Cleveland.