"For me, walking off the field at the end of that game I finally felt like I was able to be my full self again and be able to prove to everyone that I can play in this league because for so long I felt like people had been doubting me"

Allen Lazard steps out into an expectant Lambeau Field atmosphere, still yet to catch a regular-season pass from Aaron Rodgers and with just 21 offensive snaps to his name in 2019. His sole completion since going undrafted in 2018 has been a seven-yard gain via DeShone Kizer in a 31-0 defeat to Detroit as a rookie.

Much of his NFL career so far had been spent on the periphery, studying and compiling both personal and professional tendencies of the mentors around him in Jacksonville and Green Bay, employing the patience installed in him by his parents as a child growing up in Iowa.

No Davante Adams. Geronimo Allison had exited the game early in the second half. There is an opening.

"We had a couple of guys that were banged up so they kind of threw me in there," Lazard admits to Sky Sports.

"Aaron (Rodgers) vouched for me to get some more reps and that's something I'd really been preparing for my whole life."

The Packers are facing a third-and-five from the Lions 35, trailing 22-13 with nine minutes remaining in the fourth quarter. Rodgers takes the shotgun snap, recognising maximum protection to the left before glancing right momentarily to check the double-team on linebacker Devon Kennard. It's good.

While No 12 shifts his eyes back and winds up for the deep ball, Lazard is winning the sideline race against cornerback Justin Coleman and some commendable man coverage.

A lofted pass floats beautifully into the path of Lazard, who stretches his six-foot-five frame to make the diving catch for a 35-yard touchdown just inside the pylon. The sideline photographers turn their lenses towards 13, while a nonchalant reaction from Rodgers tells the story of his undoubted faith in this particular weapon. Lambeau, meet Lazard.

"It was my first MNF game and I felt like at that moment this is what any football kid grows up dreaming about doing," he said. "That's just something I've been working towards my whole life."

Three more catches from the wide receiver on the team's final drive would go on to set up Mason Crosby's last-second game-winning field goal, completing the comeback and capping a jubilant introduction.

"For me, walking off the field at the end of that game, I finally felt like I was able to be my full self again and be able to prove to everyone that I can play in this league because for so long, I felt like people had been doubting me, not giving me the opportunity and it was very frustrating and hard to deal with," he added.

"The fact I was able to go out there and finally have that production and be like my old self again, it was a great euphoria feeling.

"I'd always visualise myself just making those plays and stepping up in those moments."

Recognition became reward for a man who had been starved of opportunities on the NFL stage since signing as an undrafted free agent with the Jacksonville Jaguars in 2018.

Lazard left Iowa State as the school's career leader in receptions (241), receiving yards (3,360) and 100-yard receiving games (12), only to be confined to the Jaguars practice squad.

"Personally off the field, it was just learning how to get away from my parents, live on my own and handle that adult life as well as making the progress on the field, being able to prove I can play Sundays," explained Lazard.

"I've always been a person to have patience and let things come to me naturally, I don't like to force things at all. My parents have always told me to be patient and work hard, and that's what I did all my rookie year."

Jacksonville was by no means a wasted trip, Lazard using it as an opportunity to draw on the technical expertise and professional guidance of wide receiver coach Keenan McCardell.

He would watch five-time Pro Bowler and 2019 Walter Payton NFL Man of the Year Calais Campbell every day, making a mental note of his lack of days off.

"I'm a very observant person so when I first got to Jacksonville I kind of looked at the guys who were All-Pros, been in the league six, seven years," he said. "I just watched the effort they put in and the time and strain they have during practice.

"That inevitably affected me because I thought 'these guys are playing on Sundays and making plays, but they're still here at practice three days later putting in the same amount of effort' so it really made me raise my standard for how I approach the game."

That process continued in Green Bay when Lazard found himself feeding off the knowledge of Rodgers, Adams, Marcedes Lewis and David Bakhtiari after being signed off the Jags practice squad on December 18.

A coaching change at the end of the season introduced Matt LaFleur as the next man to impress, before Lazard entered the offseason eager to earn the trust of his famously meticulous quarterback.

One year later and he understands why Rodgers is categorised among the greats.

"These past few years of looking at guys like Michael Jordan, Kobe Bryant, Muhammad Ali, Mike Tyson. These guys throughout history in the talks of being the greatest, their work ethic and competitive levels are unmatched and I think that's what the thing is with Aaron.

"That's why people perceive him as maybe a little more harsh or coming down hard on his teammates, but ultimately he just wants to win and I can respect that because I'm on the same page as that." 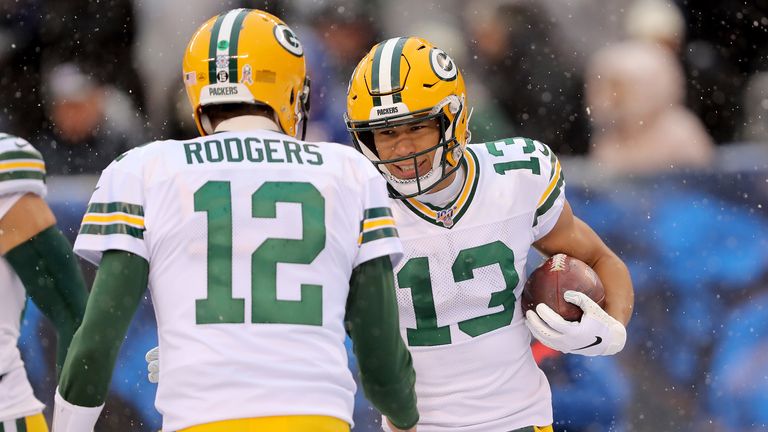 If he yells at me or he's frustrated, it's because we're trying to win here and likewise it goes for him as well. We just hold each other to a very high standard and hopefully that will bring us a Super Bowl.

Monday Night Football would serve as a catalyst for Lazard to warrant increased reps, resulting in a stunning sideline catch against the Oakland Raiders followed by five catches from five targets in a 31-24 win over the Kansas City Chiefs.

After just one reception in a gruelling 37-8 defeat to the San Francisco 49ers, Lazard came back with a career-best three catches for 103 yards and a touchdown in a 31-13 victory over the New York Giants.

"The year before, I was on the practice squad so I hadn't really played in a real game in over a year-and-a-half maybe two years so it was just being able to get back into the flow of the game," he said.

He closed out the regular season with four catches for 69 yards and a touchdown against the Lions, before seeing more limited involvement in the playoffs as the Packers lost to the 49ers in the NFC Championship game.

Such was his impression that Rodgers recently hailed Lazard as a "great teammate, and ascending player". 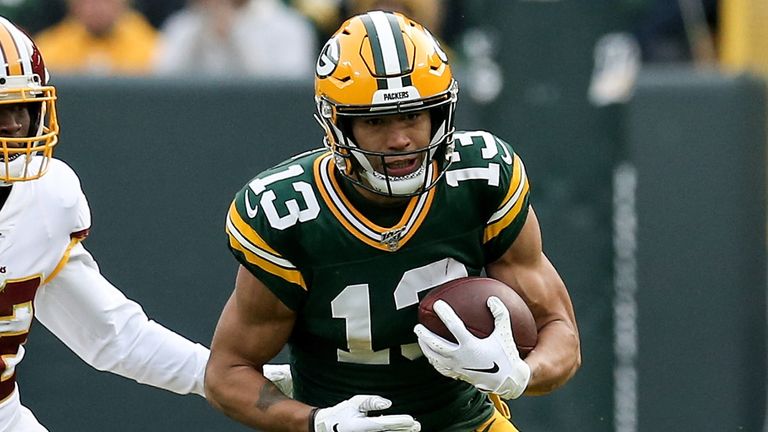 By the end of the season, he was called upon many, many times in important situations to make big plays and he did.

Maintaining that trust is the next job.

"I always tell people that for the 13-year-old me or the kid that grew up watching Aaron Rodgers playing with the Green Bay Packers, it's a crazy moment," Lazard said. "Especially being on the practice squad last year and now this guy is calling for me to be on the field with him and help him win games.

"From that perspective, it's pretty cool but at the end of the day because I've got to know him and built a relationship with him, that's just my teammate and I think we see each other on the same level.

"He was nothing less than a great mentor for me last season, explaining things, slowing things down for me and just being a great communicator overall."

Though fully prepared to carry out any job, he won't be deterred from proving himself as a wideout.

"That's always going to be a conversation with me because of the size I am and for how physical I play," he admitted. "For me and who I am as a person, I'll never let anyone put me into a box or say I need to be this or that or put restraints on me.

"I was at Coach LaFleur's house last night, he cooked us some steaks and I was telling him I can't be eating too much as a joke, just because in Jacksonville they had me run as a tight end for a few weeks." 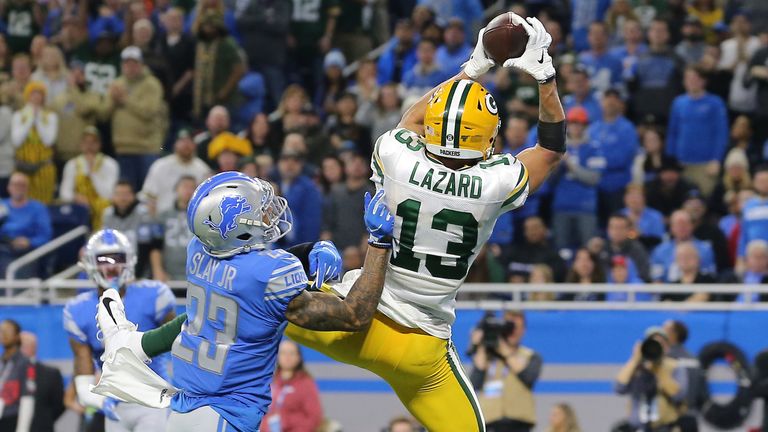 If it did come down to it and I switch to tight end, I'm going to go out there and try and be the best tight end I can be. At the same time, I know the production I can make as a wide receiver.

Lazard on talk of a move to tight end

Allow steaks at Coach's house to be a reflection of the family atmosphere LaFleur has looked to implement since his arrival.

"He's been awesome, especially with the fact that he's a young coach, he's easy to relate to," said Lazard.

"Me and three other players were at his house and he cooked us some steaks and we had some good conversations about football, life and I think that kind of relationship especially with a coach needs to get taken advantage of.

"Unfortunately not a lot of coaches are like that in this league or in football in general."

Lazard feels embedded, back in full game-mode after a battle to assert himself. He wonders what more he might be capable of after last season's strides and with LaFleur's coaching team heading into year two.

His understanding of the scheme is more polished, the relationship between himself and his quarterback only continues to develop and there is a WR2 position to vie for.

"It was quiet, it was very emotional, you felt very defeated (after the NFC Championship game)," he said. "It was the fact that a lot of us felt like we had played our best football and that's what the hardest thing to swallow about the situation was.

"We were one game away, that was one of the hardest losses I had to take in just because of the season and how everything went down with me personally.

"Being on an NFL team and playing, just being in that whole moment and still coming up short only kind of lit a bigger fire in me going into this offseason."