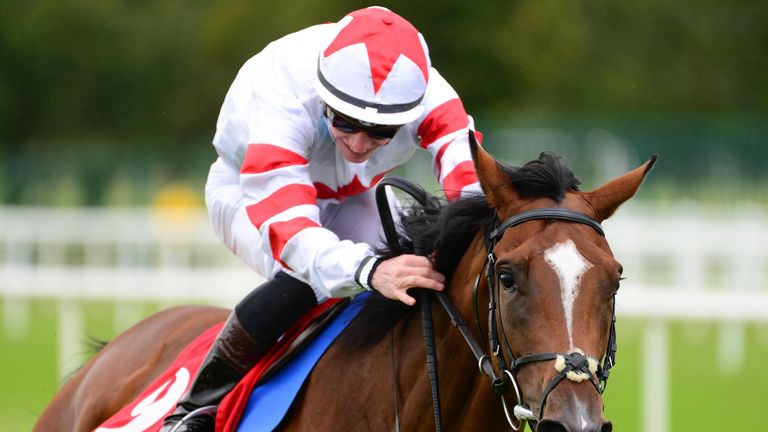 Trainer Joseph O'Brien says Baron Samedi has earned a crack at the Group One Grand Prix de Saint-Cloud, where he will bid for an eighth win in a row.

Trainer Joseph O'Brien says Belmont Gold Cup winner Baron Samedi has yet to reach his ceiling as he prepares for "by far his biggest test to date" in the Grand Prix de Saint-Cloud on Sunday.

The four-year-old, son of Harbour Watch, has won seven in a row since being gelded in August last year, rising remarkably from a rating of 65 to 112.

Having had no issue with the step up to two miles in America in June, Baron Samedi drops back to a mile-and-a-half in France this weekend, taking on two other recent Group Two winners In Swoop and Broome, live on Sky Sports Racing.

"He's been an incredible horse," O'Brien told Sky Sports Racing. "His progression has been unbelievable and he's earned himself a crack at a Group One.

"This represents by far his biggest test to date.

"He hasn't been beaten since he was gelded, he just started improving and we haven't reached his ceiling.

"He's come home from America well and we're hoping he can run a good race.

"The guys [owners Lech Racing] had their eye on this race for a little while. In terms of staying Group Ones, if you don't run in the Ascot Gold Cup you don't have a huge amount of options until a little bit later on in the year. This was a logical stepping stone for him."

A positive performance in France could pave the way for a return to Ireland or another long-haul mission, this time to Australia.

"He has races like the Irish St Leger or the Melbourne Cup as an option for him later in the season," O'Brien said.

"He's been a fantastic horse for us and for his owners and hopefully there's plenty of good days ahead of him."

O'Brien is chasing another Group One success after seeing Thundering Nights take home the Pretty Polly Stakes at the Curragh last weekend, beating Santa Barbara - trained by his father Aidan.

The four-year-old filly had a quick turnaround having run on the same day as stablemate Baron Samedi at Belmont and will now get a break.

"It was fantastic, she's a great filly," O'Brien said. "She's obviously a very exciting broodmare prospect for some stage in the future but we'll see if we can win another Group One in the meantime.

"She backed up 23 days after her American run to come back for the Pretty Polly so it was a big enough ask for her to run in both of those races.

"She'll have a little bit of time now and we'll look at races in the second half of the season."

Two more exciting fillies in the O'Brien yard look to be heading to flat racing headquarters in Newmarket next.

Pretty Gorgeous has a huge range of entries but is likely to run in the Falmouth Stakes on July 9 after finishing fifth in the Coronation Stakes at Royal Ascot on her last run.

The Cheveley Park Stakes in September is the next big target for last weekend's Airlie Stud Stakes winner Velocidad.

"[Pretty Gorgeous] has come home really well," O'Brien said. "I'd say the Falmouth is the most likely race she'll run in next.

"She's probably yet to find her best two-year-old form yet this season but we're looking forward.

"I thought she ran well to a point [at Royal Ascot]. At the one furlong marker she looked as though she was going to be right there and she just weakened a little.

"I was slow enough to really use the ground as too much of an excuse as she performed on it as a two-year-old.

"She's been training well since and we're hoping she can run a big race at Newmarket next week."

"[Velocidad] was really good. She'll most likely go to the Cheveley Park Stakes, with possibly a run between now and then.

"We'll see how she trains and decide if we need a run or not."

It was frustrating Royal Ascot for O'Brien, finishing with three seconds and a third during the five-day meeting.

Patrick Sarsfield, runner-up in the Wolferton Stakes, looks set to head to the US next for the Mister D. Stakes in August, while plans for Liffey River, second in the Britannia Stakes, are up in the air.