Kaiya Fraser: No looking back for Hackney-born jockey after remarkable three-year rise to first career winner

Kaiya Fraser rode Chris Wall's Hi Ho Silver to victory at Leicester on Monday in just his second career ride; Fraser, who grew up in Hackney and volunteered at the Ebony Horse Club in Brixton, graduated for the British Racing School in February 2019 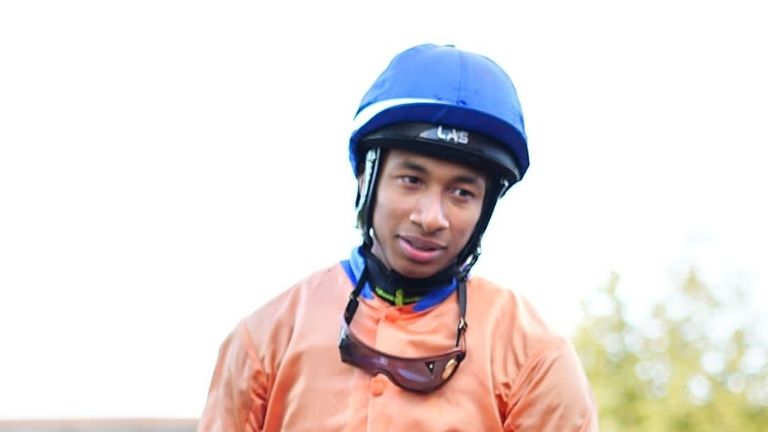 Hackney-born Kaiya Fraser explains the story behind his remarkable three-year rise from volunteering at an inner-city stables in Brixton to riding his first career winner in just his second professional race. Image: Tony Knapton

Even Kaiya Fraser himself cannot quite believe the speed with which he has progressed from a quiet inner-city horse club in London to celebrating a first career winner in just his second ride.

Born and raised in Hackney, Fraser's love of horses began simply from watching his grandfather bet on racing.

Fraser's early experiences with horses in the flesh were few and far between, including a brief visit to the yard of former trainer James Eustace and a stint volunteering at the Ebony Horse Club in Brixton, where Magnolia Cup winner Khadijah Mellah learned to ride.

The 19-year-old only sat on a horse for the first time three years ago after enrolling on a foundation course for apprentice jockeys at the British Racing School in Newmarket.

Having graduated in February 2019, the same month saw Fraser join the team with trainer Chris Wall, picking up victory on Hi Ho Silver at Leicester on Monday.

"I was speechless when I came past the line," Fraser told Sky Sports Racing. "I didn't realise at first, but when they said my number I was just really happy and shouting with joy. It was a really proud moment for myself.

"My friends and family are really happy, they can't believe it as well. I'm happy that I've made them proud and how far I've come.

"I only really went out there to get some more experience and from that race, I got a lot more than I expected."

Asked if he has watched the race back, Fraser said: "I've watched it loads of times!"

'I took a chance and haven't looked back'

Despite his remarkably rapid rise, Fraser remains grounded and acknowledges he has plenty more to learn in the game.

Explaining his journey, Fraser said: "It all started with my grandad who loved to have a few bets on the racing and watch it every day. I used to watch it with him all the time.

"My mum's friend saw that I had an interest and she used to work for an ex-owner and told him about me.

"They decided to contact Mr Eustace [former trainer, James Eustace], who gave me the opportunity to come to his yard and have a look about when I was 12. He told me to go to the Racing School after I had finished school back in London.

"I went there on a foundation course and that was the first time I'd ever got on a horse at 16-years-old. I took a chance and haven't looked back since."

Fraser reserved special praise for his mother's support, as well as Wall, who has been operating from Induna Stables since 1992, training Group-level winners such as Premio Loco and Donna Viola.

"I've learned a lot with Chris," Fraser said. "He has really taken me under his wing and I'm very thankful to him.

"I'm thankful to my mother because she has been there for me the whole time and helped me come this far."

Fraser's journey to the winner's enclosure is rather unique and so too, he hopes, is his style of racing.

"I look at most jockeys nowadays but I don't really think about looking like them, I just want to get myself better and look good doing it in my own way," Fraser explained.

"At the time, watching with my grandad, I didn't really know much about racing so I just enjoyed watching it. He really loved Lester Piggott.

"I still need a lot more experience because I have only got two rides. The plan is to just learn on a day-to-day basis and hopefully more winners will come in time."

The next goal? "Just to get another winner."