It is one of the most talked-about races of the entire jump season and this Saturday's edition of the Ladbrokes Trophy promises to provide plenty of discussion, even before the field set off over the famous three-mile-and-two-furlong trip around Newbury.

An unseasonably dry autumn has many trainers praying for the rain to come and if it does not, it could lead to some high-profile withdrawals and market shifts.

The Irish, who last took the spoils with Willie Mullins' Total Recall in 2017, look to have a strong challenge with Henry De Bromhead's Eklat De Rire and Mullins' Ontheropes, while the home team are headed by the Paul Nicholls-trained Enrilo and Colin Tizzard's Fiddlerontheroof.

Here is what key connections have said about their intended runners...

"He is very similar to Total Recall, and he was given a very good ride by Sean O'Keeffe, who will ride again on Saturday, when landing the Munster National.

"He has come out of that race very well and has been in good form at home since.

"As we know, it is one of the most prestigious races on the National Hunt racing calendar and a race everyone wants to win, and we have been lucky enough to get on the scoresheet before and it would be nice if we could add to that success."

"He's got good form and won well the other day. He's a really nice staying chaser, so fingers crossed we'll get him there and he'll give a good account of himself.

"He had some very good runs over fences last year. He was very impressive in his novice chase at Naas and we thought he was going well at Cheltenham.

"He's a horse we have high hopes for. How exposed or unexposed he is, I don't know really. Once you're up in the 150s, you'd be a brave man to be aiming for much beyond that, in my opinion.

"It seems a suitable race for him to go for, we're happy with him and looking forward to it."

"The great thing is he stays and has loads of speed. You need both in the Ladbrokes Trophy. I just think he's a horse that will suit the race and vice versa.

"We'll just follow the leaders and keep it simple. This time of year when the ground is good there is no point being dropped in out the back.

"I think he has physically improved a lot this year and what he does next weekend will tell us if we can dream about running him in some better races or whether he is just a handicapper.

"Plenty of good horses have run in this race. You never know if they run well in this where they could end up. I'd like to think he could eventually be better." "He's a little bit quirky but he's got loads of ability and it looks a nice open Ladbrokes Trophy so fingers crossed we go there with a good chance.

"By no means we'll be dropping him in. We'll be riding him fairly prominently but I won't be turning into the straight and committing from four out.

"I'll be holding on to him a little bit and deliver him at the last with a bit of company.

"He's not the type of horse you'd want to clear the last five in front as he'd have a right look around after the last so we have to be fairly switched on with how we ride him.

"He's ran well before on soft ground but Sandown at the end of the season was probably his career-best so the ground out there is lovely and if it stays like that it'll be ideal.

"I'm not sure if he's a Grade One horse but he's a very good handicapper and hopefully he's got a few pounds in hand."

"It's a huge race in the racing calendar and we've been lucky enough to win it twice and have had plenty of placed horses in it so we're always going to support it.

"Second-season novices have a good record in it and most of ours have been those horses.

"Fiddlerontheroof is probably the best we run in it and it's exciting.

"He ran a brilliant race in the Colin Parker at Carlisle. He actually broke the track record that day so it was a cracking performance.

"He was ultra-consistent last season and taking on the best novices when our horses weren't quite right.

"That was probably his best performance ever in the Colin Parker and the Ladbrokes had been on our mind for the second part of last season.

"That's his target and if we think he's progressing so off 148 is a lovely mark to be racing off.

"He's not ground dependant. When he was a novice hurdler he was just a stronger horse so he could handle heavy ground but I think he proved last year he pretty much goes on any ground." "He went up six pounds for his Chepstow run so he's progressed and then the Charlie Hall he picked up about £23,000 in prize money for finishing second and the handicapper didn't put him up.

"The ground was a bit dead for him at Wetherby but he looks like he's stepped up this year.

"He won't run in the winter when it's really wet so this will be his last run maybe before giving him a nice break.

"We always ride him conservatively and they can get racing early here. Hopefully, he'll come home well.

"He actually can't run in the Grand National this year as he won't be qualified as he is too young but he looks a National type for years to come." 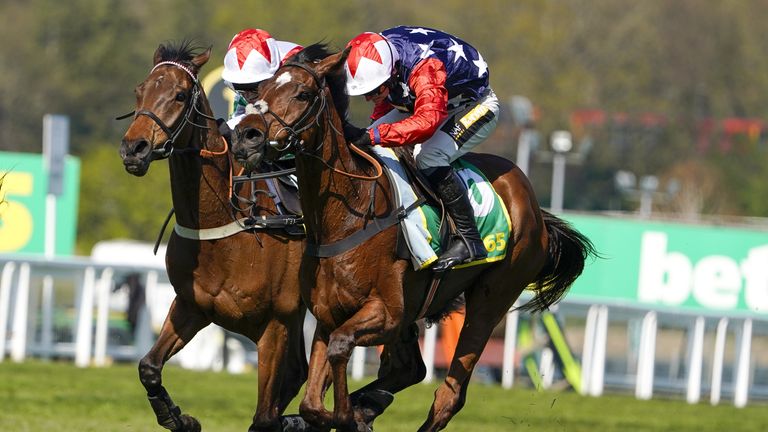 "The ground was the deciding factor. David [Pipe] and I had a conversation about it a couple of days ago. I've come down on Cloth Cap [over Remastered] and we'll see if I'm right on Saturday.

"I was pleased with his run at Cheltenham (first time out). He has to improve for it, but there is no reason why not. It was his first run back off the wind op and he ran very pleasingly. It was only from the second last that we got run out of it. The conditions should suit him better on Saturday.

"I was having a great ride off him in the Grand National until he started making a noise and then the wheels came off very quickly. Hopefully that's been rectified."

"He'd gone over the top by the spring and didn't really merit another race as his work wasn't good enough. As much as I wanted to run him, I couldn't.

"We put him away and now we're just waiting for the right ground and the right race. This was earmarked a long way out so fingers crossed we get there.

"He's not a horse that takes a huge amount of work and this [Newbury Gallops Morning] would be as much as I'd want to do. If this doesn't put him spot on then we won't be going." "He's one horse that doesn't want rain so if it really doesn't want to rain between now and Saturday week then that'll be right up his street.

"He's probably not going to be one of the favourites but he'd have his chance.

"He's always had the ability. He does tend to drop himself out in races and then he'll come with a rattle. In a race like this, you can't afford to give too much ground away but that's his nature."

"Mister Malarky has had two runs this season. He was a bit disappointing on his first, but he takes a couple of runs to get sharp and while this is chucking him in at the deep end, he is a good horse when it all clicks for him - you wouldn't necessarily know when that is going to be.

"But on a going day has plenty of talent and he wouldn't mind a bit of decent ground if it stays dry all week."