Charlie Appleby has hinted that Naval Power could be set for the move into Group One action after winning at Ascot.

Charlie Appleby is looking forward to seeing Naval Power test his powers at Group One level before the season is out after maintaining his unbeaten record with a dominant display at Ascot.

A winner on his Yarmouth debut in May and at Leicester last month, the Teofilo colt was the 10/11 favourite to complete his hat-trick stepping up to Listed class for the Flexjet Pat Eddery Stakes.

After tracking the pacesetting Finn's Charm, Naval Power eased to the front and the further he went the better he looked, eventually passing the post with six and a half lengths in hand.

The winner holds an entry in the National Stakes at the Curragh on September 11, while Appleby believes his charge will benefit from a step up from seven furlongs to a mile.

"I was pleased with his first run, confident with him second time and very confident coming here over seven," said the Moulton Paddocks handler.

"What we have seen is an exciting horse and my feeling is that when we go up to a mile he will improve again.

"We will see him at his best in a Group One over a mile, maybe in a race like the Vertem Futurity Trophy at Doncaster.

"He couldn't have been more visually impressive - we haven't seen an unbeaten Teofilo for some time now."

Sky Bet cut Naval Power to 12/1 favourite for next year's 2000 Guineas at Newmarket. 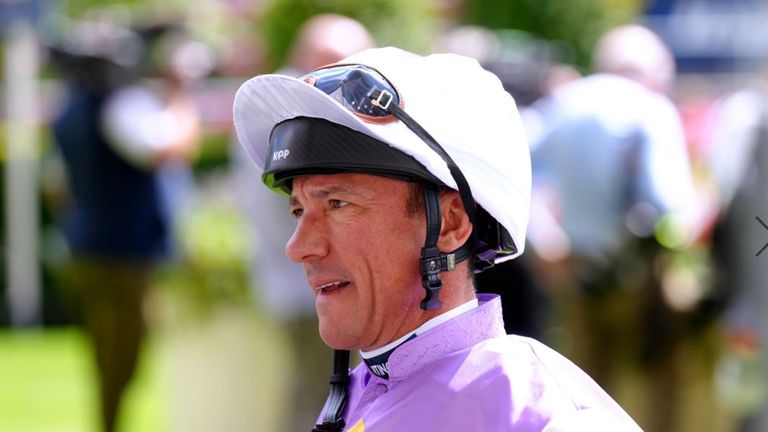 It was not meant to be for either Ralph Becket with Westover or Frankie Dettori on Emily Upjohn in the King George but, before that, the pair combined to land the Group Three Princess Margaret Keeneland Stakes with Lezoo.

Winner of her first two starts at Bath and Newmarket before finishing second to Mawj in the Duchess of Cambridge Stakes a fortnight ago, Beckett's filly was a 6/5 shot to get back on the winning trail.

After being settled in midfield for much of the six-furlong contest, Lezoo made her move approaching the two-furlong marker and soon swept to the lead.

The previously unbeaten dual all-weather winner Kinta came from out of the pack to throw down a challenge, but the market leader was always doing enough in front and had a length in hand at the line.

Breege was a further two and a half lengths away in third.

Dettori told Sky Sports Racing: "I probably did kick a bit too soon but last time, we went slow and it turned into a sprint. She's very tough and we know she gets the six [furlongs] very well and I knew she had the legs to get to the line.

"I think we'll stick to six and maybe go to the Lowther at York."

James Fanshawe's Fresh bagged the big-race victory he has long promised in the Moet & Chandon International Stakes at Ascot.

The son of Bated Breath has contested multiple prestigious handicaps at the Berkshire circuit over the past couple of seasons, finishing a close second in the Wokingham at Royal Ascot last year.

He was fourth in the Victoria Cup earlier this season and finished ninth when favourite to go one better than 12 months earlier in the Wokingham five weeks ago.

Ridden by Danny Tudhope, Fresh was an 8/1 shot for his latest assignment and raced in the group that made their way down the middle of the track.

Dark Shift, the 100/30 favourite to supplement his win in the Hunt Cup at the Royal meeting and claim a fifth win at Ascot, hit the front inside the final furlong.

However, he was unable to resist the late surge of Fresh, who got up score by a short head from Bless Him, who also finished strongly to pip Dark Shift to the runner-up spot.

Fanshawe said: "He loves this track. I was a bit concerned about going seven furlongs as he is best over six in a fast-run race.

"But they have done a lovely job with the ground, which is easy to say in hindsight, and he deserves that as he was second in the Wokingham here and has run two very good races here this year.

"It's great that he's won. He thoroughly deserves it. It is great for the team as things have been a bit sticky and hopefully this is a sign of good things to come.

"I'm not sure where he will pop up next. He just likes something with a stiff finish and he loves soft ground, so whether we can afford to enter in the Champions Sprint here in October - you never know what happens there.

"It is funny, this track, as sometimes you get horses who don't like firm ground who can get away with firm ground here on that straight track for some reason."