Christophe Soumillon: Jockey banned for two months for elbowing Rossa Ryan out of saddle at Saint-Cloud

Christophe Soumillon made deliberate contact with Rossa Ryan during the Group Three Thomas Bryon Stakes at Saint-Cloud on Friday; Ryan tumbled to the ground but is "okay" after walking off the track; Soumillon's two-month ban starts on October 14 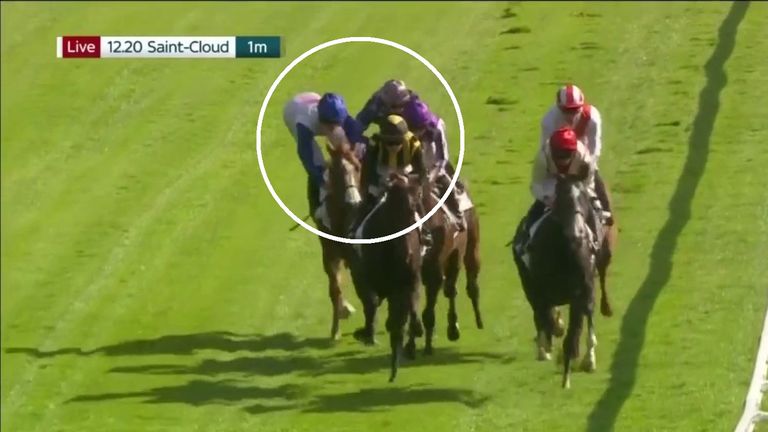 Speaking exclusively to Sky Sports Racing, jockey Christophe Soumillon admitted to making a 'terrible mistake' after elbowing Rossa Ryan out of the saddle, earning the French rider a two-month ban.

Christophe Soumillon admits he made a "terrible mistake" after elbowing rival jockey Rossa Ryan out of the saddle, for which he has been banned from riding for two months.

In a dramatic incident during the Group Three Thomas Bryon Stakes at Saint-Cloud on Friday, Soumillon, riding 15/2 shot Syros, deliberately made contact with Ryan on Ralph Beckett's Captain Wierzba as the pair chased eventual winner Continuous.

Soumillon leaned across with his elbow and caught Ryan, causing the Irish rider to tumble to the ground and land on his head.

Ryan was able to walk away from the track and into an on-course ambulance to be checked over and has since told Sky Sports Racing he is uninjured.

Soumillon's two-month ban will start on October 14 and run until December 12, meaning he will still be able to ride Vadeni in Sunday's Prix de l'Arc de Triomphe.

How the elbow incident unfolded

Speaking exclusively to Sky Sports Racing in the immediate aftermath of the race, Soumillon said: "I received a little bit of pressure from Rossa on my outside as I tried to keep a better position behind Ryan [Moore, on Continuous].

"I put my elbow against him just to make him understand I wasn't going to the inside. Straight away I knew I made a mistake and I'm terribly sad with what happened because I hate seeing stuff like this.

"I really want to apologise to everyone. I'm happy Rossa is fine but this was not a nice act on my side and I'm terribly sorry.

"I accept the sentence for what I did, it was a terrible mistake. Hopefully that can set an example to others.

"I didn't do it on purpose to make him fall off his horse, I was just trying to keep my position."

Syros was disqualified from the race after finishing fifth of the remaining five runners.

Many leading figures in the racing world reacted with shock and anger at both Soumillon's actions and the length of his ban.

Amo Racing, Ryan's former employers, tweeted: "Disgraceful, appalling what has happened in France today. If a jockey is allowed to do that and not be banned immediately then we are all in trouble!

"To ban a guy in October and November you may as well pay for his Christmas holiday too."