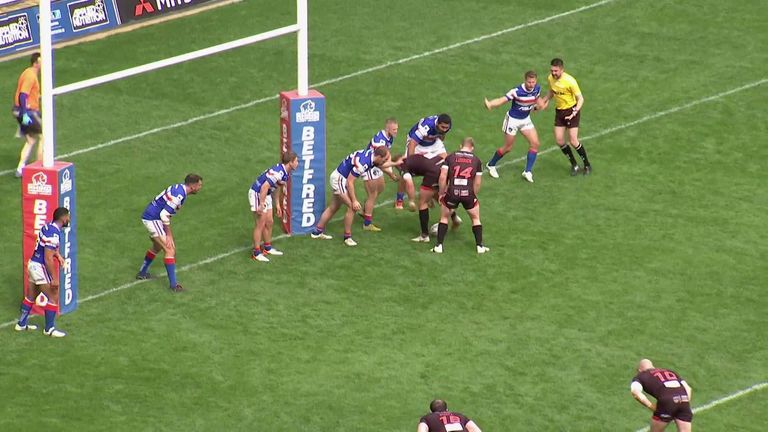 Niall Evalds scored a hat-trick to inspire Salford to a 44-20 win over Wakefield at the AJ Bell Stadium on Sunday.

The full-back's second try saw him register a career century of touchdowns. He then added another with three minutes remaining to seal a crucial victory for Ian Watson's men, who had lost their last four games.

While Evalds took the individual spoils, it was Robert Lui who turned the game in Salford's favour with a try and four assists.

And though Wakefield hinted at a comeback with a try early in the second half, Salford were well worth their win.

The home side outscored Wakefield four tries to one in the first half and took a deserved 20-6 lead into the interval.

Despite a poor recent run, Salford started the game with plenty of confidence and were ahead after just five minutes. Lui's long pass to the right edge found Jake Bibby in space to score at the corner.

Against the run of play, Wakefield - themselves without a win in their last four - took the lead at the half's midway point when Jacob Miller's kick was spilled and he was able to regather the ball and score a try which Danny Brough converted to make it 6-4.

But Salford enjoyed a strong finish to the half, scoring three tries in just 12 minutes. A beautifully executed 'sliced' kick off the side of his boot by Lui was well read by Evalds who was able to score by the posts, with Krisnan Inu adding the conversion.

Lui and Evalds were involved again as Salford scored their third try, helping to give Bibby the opportunity to touch down in the corner for his second.

With three minutes of the half remaining, Joey Lussick darted under the posts from dummy half after Tyrone McCarthy had been stopped just metres short of the Wakefield try-line.

Inu kicked the conversion but was narrowly wide with a penalty as the half-time hooter sounded.

Trinity coach Chris Chester would have been encouraged by his side's lively start to the second half which saw Ben Jones-Bishop touch down and Brough add the conversion off the touchline.

But rather than build on their recovery, Wakefield conceded again in the 48th minute when Lui chased down his own kick and Inu added the goal.

Wakefield again produced a quick response when Jones-Bishop provided the link for Miller to score his second, but Brough missed the conversion meaning the deficit was still 10 points.

However, Salford finished the game on a high to climb to sixth in the table. The impressive Evalds claimed two tries in the final six minutes, both converted by Inu, to add some polish to the final scoreline.