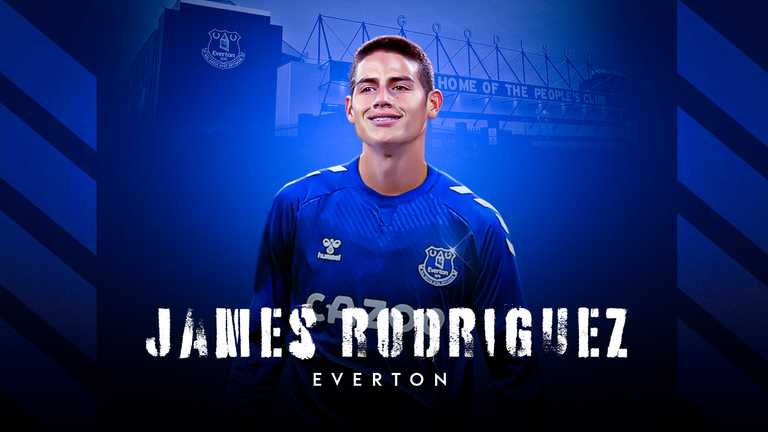 Will James Rodriguez star in the Premier League with Everton?

It is now over six years since James Rodriguez chested the ball up for himself and crashed a stunning volley in off the underside of the bar against Uruguay at the 2014 World Cup. Since then, the great Colombian hope has struggled to consistently meet the high expectations placed upon him.

With that volley winning the Puskas award for best goal of the year in world football and five other strikes earning him the World Cup's Golden Boot, James was primed to become a global star. His first season at Real Madrid suggested the Spanish team had got their hands on a player who would shine for years to come.

But despite 13 goals and 13 assists in Spain's top flight in 2014/15, a place in La Liga's team of the year, and being named the competition's best midfielder, James became a peripheral figure the following season under new head coach Zinedine Zidane. Real had fallen short in La Liga and the Champions League and the Frenchman overhauled the side to turn them into European champions. James had to make way. There have been flashes of James' quality since then - particularly during the first season of a two-year loan deal at Bayern Munich - but, after another wasted season out of the frame under Zidane at Real Madrid, there is an intriguing question hanging over his transfer to Everton: can he recapture his best form again?

It is not an easy one to answer, especially with evidence of his current level hard to find. After all, he made just five starts in La Liga last season. But at 29-years-old, James still has time on his side and South American football expert Tim Vickery, who has monitored his journey, believes the attacking midfielder still has quality in his locker. 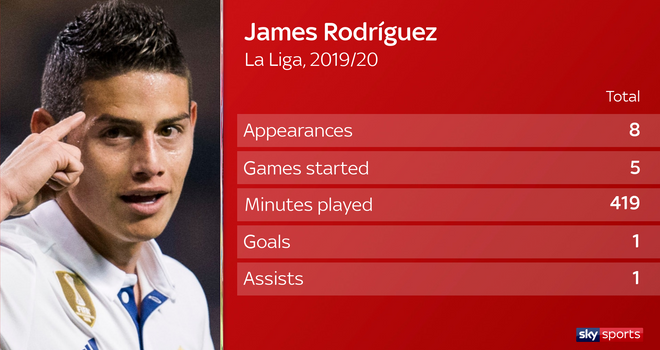 "He's been a victim of stockpiling," Vickery told Sky Sports News. "There's only so many players that can be important in the Real Madrid line-up. But he's a very, very classy player.

"Perhaps not quick enough, not with the express pace to fit into the Real Madrid system, but at Everton he's got everything he wants."

Indeed, while Sky Sports News reporter Alan Myers describes James as "Everton's biggest-ever signing", this is a deal which suits both sides.

At Goodison Park, James is reunited with a manager in Carlo Ancelotti who coached him through his best season at Real Madrid and then took him to Bayern Munich where he once again impressed in his opening campaign. 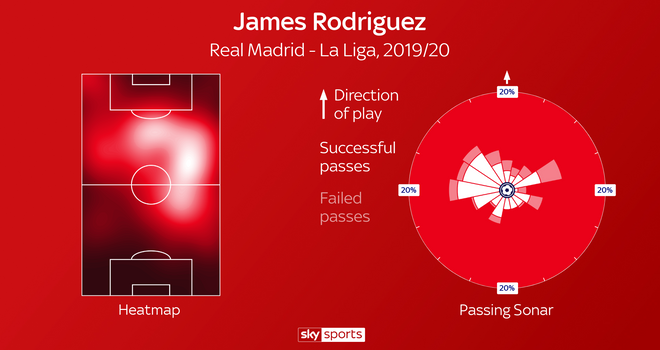 When James did play for Real Madrid, he featured on the right side of their attack - and he could take on a similar wide role at Everton

"There was a good atmosphere between James and Ancelotti," says Sky Germany reporter Torben Hoffmann, explaining how James preferred the less intense training sessions put on by the Italian boss compared to his successor Niko Kovac.

It is clear Ancelotti knows how to get the most out of James, and the way he is developing the Everton line-up should suit his new star signing, too.

"James has got a coach [Ancelotti] who knows him well and admires and respects him."

"James has got a coach who knows him well and admires and respects him," said Vickery. "It's a good fit for the way Everton want to line up at the moment.

"You can imagine James in a wide midfield position in a 4-4-2 or in a deeper, central role, arriving as an element of surprise, and if I was Richarlison I'd be licking my lips at this.

"You can imagine James reproducing the relationship with Richarlison that he's had with Radamel Falcao for the Colombia national team."

Strength in depth with Sigurdsson and Doucoure

A creative player who can play wide or more centrally, perhaps as a No 10 off the striker? Then what does James' arrival mean for club-record signing Gylfi Sigurdsson? It appears the Iceland playmaker will be retained, too. 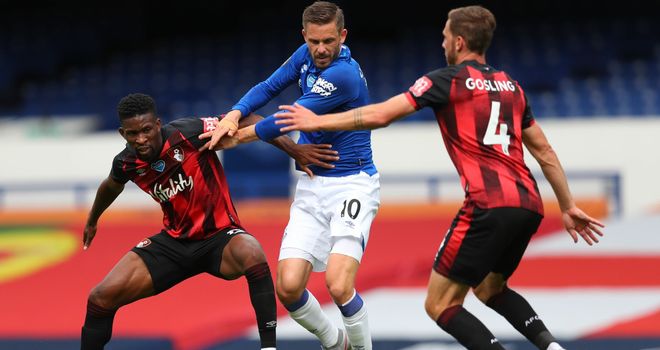 Ancelotti has spoken about wanting an "evolution" at Everton and taking "the next step", "with better quality, better ambition, better motivation and more passion". That includes boosting the team's strength in depth.

That ties in with Abdoulaye Doucoure's imminent arrival from Watford, too.

Everton now have options when it comes to attacking, creative midfielders. That is a luxury they did not have when Ancelotti arrived. Their tally of just 44 goals in the Premier League last season - their lowest total since 2004/05 - underlined the point.

"Ancelotti has wanted more creativity in the side - and Everton can't have enough midfielders," said Myers. "By all accounts Ancelotti likes Sigurdsson. He's been playing out of position, playing deeper, which hasn't been ideal for him. But played in the right role at the right time he can add sparkle and become a much more valuable player to Everton.

"He's so good from dead balls and that's invaluable. He scored a great goal against Blackpool in pre-season and that was a reminder he can score spectacular goals out of nothing. I can see him staying."

Behind those attack-minded players, Ancelotti has also added Allan to his ranks.

The Brazil international - capable of driving dribbles and threading throughballs, but primarily known for his sharp tackling and energy - anchored Napoli's midfield during Ancelotti's time in charge there between 2018 and 2019. He will almost certainly take on the same role at Goodison.

That will solve another crucial piece of the puzzle for Ancelotti at Everton. 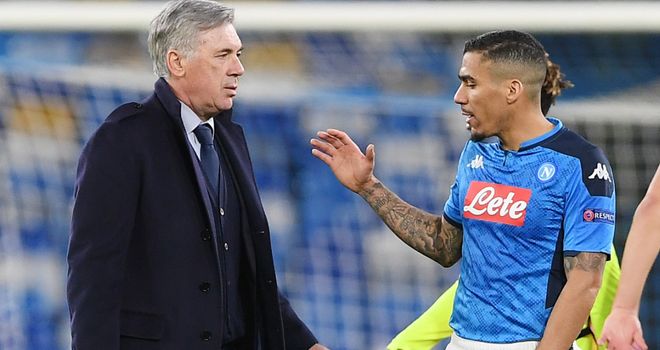 "The biggest criticism last season of Everton was the midfield," explains Myers. "They were too easily bypassed and that put the defence under pressure - although, we saw good performances from centre-backs Michael Keane and Mason Holgate. That's where Allan comes in.

"I expect Allan will play alongside Andre Gomes in central midfield. Gomes can spray the ball around and be the passer, while Allan can do what Peter Reid used to do all those years ago and destroy, break up play - although he has ability in possession as well. They'd complement each other well."

Vickery also believes Allan is an important signing for Ancelotti.

"Allan is one of those players coaches tend to rate higher than fans," he said. "Allan is a problem solver. He gets around the field. He sees the gaps, he plugs the gaps, he links the lines. He's a player who will help your team function."

From that solid base, and with creative players around him and a talented striker in Richarlison ahead of him, the hope is James can recapture his best form in this new Everton environment.

Ancelotti given tools for Everton evolution

There are more areas to address, of course. Myers believes Everton will also target a goalkeeper - perhaps Manchester United's Sergio Romero - to challenge Jordan Pickford, while Jonjoe Kenny will have to prove to Ancelotti he is good enough at right-back.

Ancelotti may also look to add further experience to an Everton line-up which was the fourth youngest on average in the Premier League last season.

But owner Farhad Moshiri has this week shown he is prepared to back his coach and that, says Myers, can give fans optimism Everton will improve on a 12th-placed finish in 2019/20, their lowest in 16 years. 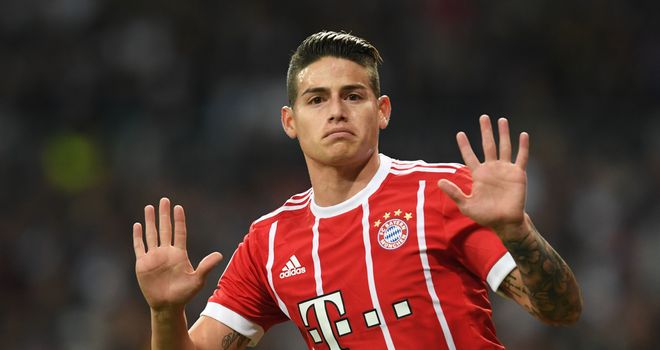 "Everton have brought through three or four young players into this side in the last couple of seasons - in not ideal circumstances - and now Ancelotti wants some experience. He knows these players, he trusts them," he said.

"Everton have been paying for the mistakes in recruitment under Ronald Koeman, which didn't work out, and there are still six or seven players surplus to requirements.

"But Moshiri came in and said he wanted a 'Hollywood manager' and he appointed Carlo Ancelotti. Now this is a statement of intent with this signing of James.

"Moshiri knew what he was getting with Ancelotti. Now he has to back him. With the pandemic, things have changed, the world is a different place. But you still have to give him the tools to do the job, which he is."

Now it is time for Ancelotti and Everton to go to work on his Everton evolution.

The summer transfer window will run for 10 weeks from July 27 and close at 11pm on October 5. A domestic-only window for trades between the Premier League and EFL then runs from October 5 and closes on Friday October 16 at 5pm.