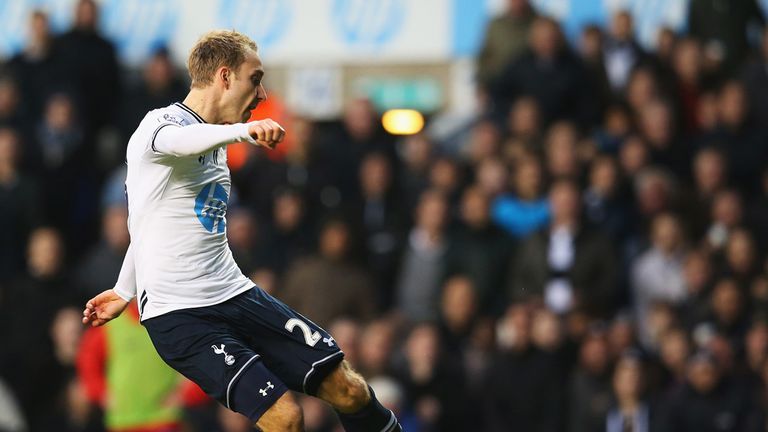 Christian Eriksen insists he would not seek a move away from Tottenham if Tim Sherwood's side fail to finish in the top four this season.

Centre-half Jan Vertonghen hinted earlier in the week that his future at White Hart Lane would come into question if Spurs did miss out on UEFA Champions League football next season, but playmaker Eriksen is focused on his future in north London.

"I don't know how other guys are thinking, but I'm happy where I am, and hopefully we'll get to the Champions League anyway," he said.

"I think it is important for the club, and the calibre of player that could come, or stay. I think everybody wants to go to the Champions League.

"I've tried it before at Ajax, and you see everything is bigger, the atmosphere, the TV rights, the people watching.

"The Europa League is great, but the Champions League is what everybody wants, it's the best place to play."

Spurs are fifth in the Premier League - six points behind second-placed Liverpool with 10 games remaining - and Eriksen hopes to return from injury to face Chelsea in the Saturday Night Football clash at Stamford Bridge, believing a win would establish their Champions League credentials.

"A win would show everyone that we are top-four contenders, it would show we are still in the race, that's what we want.

"If we want to get to the top four we have to win these games, and that's what we'll try to do. If we win again it's so close that anything can still happen.

"Everybody still has the focus to push towards the Champions League, and hopefully we'll get there. I hope we've got momentum now, you only gain confidence from winning.

"All that matters at this stage is the points, it doesn't matter how you win, we saw that against Cardiff. It wasn't pretty, but we won.

"But we still do also know we have to play better to beat Chelsea, or Arsenal, we know that."