The Clarets are said to be discussing a fee in the region of £15m for Liverpool winger Wilson; Dyche expects Stephens to join later on Wednesday or on Thursday Burnley are closing in on the double signing of Liverpool's Harry Wilson and Brighton's Dale Stephens.

The Clarets are in talks with Liverpool over a deal for winger Wilson, and are said to be discussing a fee in the region of £15m.

Stephens, meanwhile, is in London finalising the paperwork and completing a medical, with Burley boss Sean Dyche confirming that the midfielder is set to join the club later on Wednesday or on Thursday following their 2-0 Carabao Cup win over Millwall.

"We think that one's there, just dotting the i's and crossing the t's," Dyche said.

"He's a player I've liked historically, he obviously fits with the financial thinking at the minute, but he's a player that we do like, he's an experienced player, I've tried to sign him in the past, and I often have stuck with targets I've managed to get here eventually.

"We wish him all the best when he comes in, it's not done, but it more or less is done. I can't see there'll be anything at this time that will stop it. 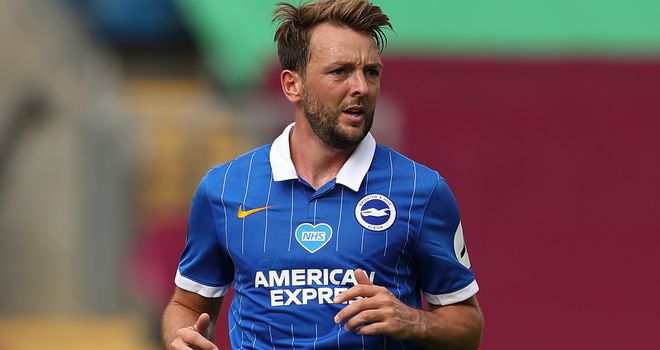 "He brings a calmness, experience, composure, he's been through quite a few managers there so he's had a good experience of different ways of working."

Local reports on the south coast claim the fee for Stephens is £1m, potentially rising to £2.5m.

Sky Sports News reported this week that Burnley had renewed their interest in the midfielder, who has been a long-term target for Sean Dyche.

Wilson, meanwhile, has recently fallen further out of contention at Anfield after the arrival of Diogo Jota from Wolves, having spent last season on loan at Bournemouth.