Champions League holders Bayern Munich were knocked out this season's competition by Paris Saint-Germain on Tuesday; coach Hansi Flick tipped to leave the club at the end of the season to take Germany job; Joachim Low is to vacate the head coach's position after the Euros

Hansi Flick will leave Bayern Munich in the summer to take over from Joachim Low as coach of the Germany national team, Lothar Matthaus has said.

Flick has steered Bayern to success after success since taking over from Niko Kovac in November 2019, winning six trophies in 18 months in Bavaria.

Last month it was announced that Joachim Low will step down from his role as Germany head coach following Euro 2020 after asking to end his contract early, and Flick has been one of the names mentioned as a potential successor.

Speaking to Sky in Germany, Matthaus believes that Bayern's Champions League exit at the hands of Paris Saint-Germain will persuade Flick to be the one to take over from Low. 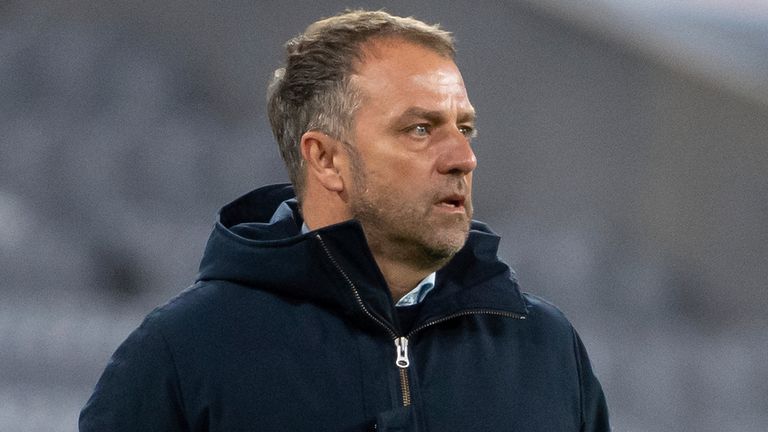 "I already said two weeks ago that in my opinion, this is Hansi Flick's last season," he said. "I've said that Hansi Flick is right at the top of the DFB [German Football Federation] list, and then nothing else for a long time. There's an offer from the DFB, yes.

"So, they want Hansi Flick and I think - or rather, I'm convinced - that Hansi Flick will no longer be Bayern coach after this season.

"That means the last game against Augsburg at home will be Hansi Flick's last game as head coach of Bayern."

And, according to former defender Matthaus, Bayern are already planning for Flick's successor, with RB Leipzig coach Julian Nagelsmann identified as the man they want to come in.

"Munich have already chatted a bit with [Julian] Nagelsmann, including about financial matters," defender Matthaus added.

"Before the start of this season, Flick said that the coach should have a vote on new signings, which I think is right. As a coach, what am I going to do with players who I perhaps don't want?

"I think it's got too much for Hansi, and then the offer, the opportunity is there to become Jogi Low's successor."

However, Nagelsmann dismissed all speculation at a press conference on Wednesday, claiming he intends to respect his deal with RB Leipzig.

"There were and there are no talks with FC Bayern," he said. "I have no idea where Lothar got this information from. This of course also applies to my agents, there were no talks.

"I have not spoken to the club because there will be nothing to discuss. I still have a contract with RB until 2023."