Carlos Vinicius has struggled to make an impact since joining on a season-long loan from Benfica and Tottenham are not expected to take up the £36m option to buy him permanently; Spurs have no interest in selling Harry Kane and are searching for a new back-up

Tottenham are on the hunt for another new striker with Carlos Vinicius set to return to Benfica this summer.

The 26-year-old has struggled to make an impact since joining on a season-long loan and has not been in three of the last four matchday squads, including the Carabao Cup final.

Vinicius has faced the unenviable task of competing with and providing foil for Harry Kane and has scored just once in nine Premier League appearances.

The club are therefore not expected to take up the £36m option-to-buy inserted into Vinicius's loan deal, and are looking elsewhere for other options ready for when the next transfer window opens.

Tottenham's recruitment plans are unchanged by Jose Mourino's sacking and the lack of an identified successor, Sky Sports News has been told, and another new back-up striker to Kane remains one of the club's priorities. 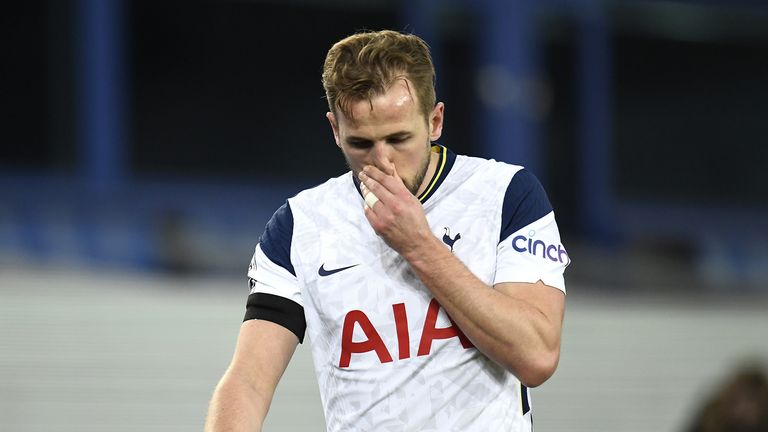 Paul Merson believes Harry Kane will find it difficult to get a move away from Tottenham in the summer due to the transfer fee that would be demanded.

Kane is ready to consider his own future at Tottenham after the European Championships this summer, with another season set to end trophyless and Champions League qualification very uncertain.

But chairman Daniel Levy has no interest in selling the club's prized asset and instead intends to be more focused on finding a successful deputy; a problem Spurs have toiled with since Kane's emergence in 2014-15.

After Roberto Soldado was sold, they tried both youngster Vincent Janssen from AZ Alkmaar and veteran Fernando Llorente - but both also found life hard in N17 and have since moved on.

Another Spurs priority is said to be at centre-back, where they have made inquiries about Bayern Munich's out-of-contract star Jerome Boateng and Southampton's Jannick Vestergaard, among many as they assess the upcoming market.

Depending on outgoings they may also strengthen in midfield, among the forwards, at right-back and in goal - but like most clubs the financial impact of the coronavirus pandemic has been significant, so they need to sell to buy.

Sky Sports News has already reported the likes of Stuttgart's Nicolas Gonzalez, Lille's Jonathan Bamba and Palmeiras' Gabriel Menino are other players the club have been monitoring.