Takehiro Tomiyasu can play as a right-back or centre-back; 22-year-old joins Arsenal from Serie A side Bologna; Gunners' north London rivals Tottenham were also keen on signing Tomiyasu this summer; Reiss Nelson joins Feyenoord on loan, while Alex Runarsson moves to OH Leuven 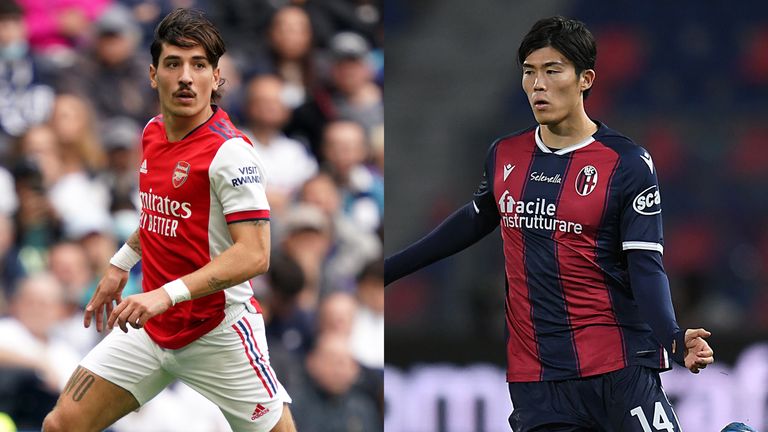 Arsenal have signed defender Takehiro Tomiyasu from Bologna in a £19.8m deal while Hector Bellerin has joined Real Betis on loan for the season.

Tomiyasu - who will wear the No 18 shirt at the Emirates - underwent a medical in Italy on Tuesday and has signed a four-year deal, with the option of a fifth.

The 22-year-old Japan international can play at both centre-back and right-back and had attracted interest from Arsenal's north London rivals Tottenham earlier in the transfer window.

Arsenal manager Mikel Arteta told the club's website: "Takehiro is a strong defender with good experience in Serie A and at international level.

"He's a versatile defender with great defensive qualities, high technical ability and composure on the ball. He will be an important member of our squad.

"We look forward to Takehiro joining up with us when he returns from international duty."

The Gunners' technical director Edu added: "We're delighted to have signed Takehiro. We've been watching him for a while now and we're pleased that we have reached an agreement with Bologna.

"He is an important addition to our squad."

Arsenal had also been keen on signing Barcelona right-back Emerson Royal, but the 22-year-old's preference was to move to Spurs.

Tomiyasu's arrival helps to fill the gap left by Hector Bellerin, who has joined Real Betis on loan until the end of the season.

The Spain international had been at Arsenal since signing from Barcelona in 2011, but Arteta has preferred Cedric Soares and Calum Chambers at right-back so far this season.

The Gunners can also call on Ainsley Maitland-Niles in the position, after it was confirmed he would stay at the club this summer following clear-the-air talks with Arteta.

Reiss Nelson has joined Eredivisie side Feyenoord on loan for the 2021/22 season, while goalkeeper Alex Runarsson has signed a season-long loan deal with Belgian club OH Leuven. 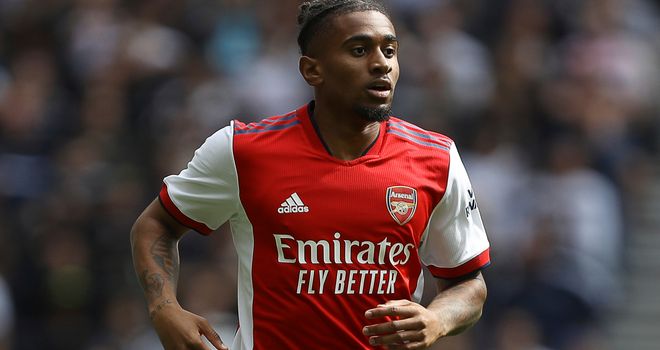 Reiss Nelson will spend the season in the Netherlands with Feyenoord

Nelson, who is an Arsenal academy product, enjoyed a loan spell at Hoffenheim in the 2018/19 season.

In total, the 21-year-old has made 48 first-team appearances for Arsenal since making his debut at just 17 as a sub at Wembley during the 2017 Community Shield victory over Chelsea.

He is followed out of the Emirates by Runarsson, who departs Arsenal after just one season with the club.

The Iceland international joined the Gunners from French club Dijon last summer and went on to make six appearances in the 2020/21 campaign.