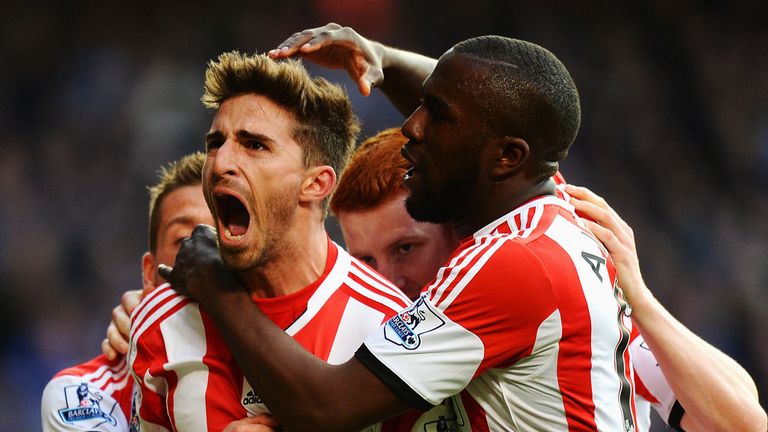 Fabio Borini: Hoping to be given a chance at Liverpool next season

Fabio Borini is hoping to be given a chance at Liverpool next season after impressing on loan at Sunderland.

The Italian striker joined Sunderland on a season-long loan deal last summer after enduring a difficult first season at Liverpool due to a series of injuries.

Liverpool boss Brendan Rodgers was happy to loan him out so that he could get regular first-team action and Borini has caught the eye during his time on Wearside.

"It depends on what Liverpool say. I can say anything definite now because anything is possible."

Borini played a key role in securing Sunderland's Premier League survival, scoring nine goals in 39 appearances and now the former Roma man is waiting to see if he will be in Liverpool's plans next season.

"Liverpool need a bigger squad because you can't play four competitions with the same 11 players," Borini told the Daily Mirror. "But it is now down to the Liverpool point of view and their sporting director. It is not down to my words.

"It depends on what Liverpool say. I can say anything definite now because anything is possible. There is a World Cup coming up so a lot depends on the national team and whether I am selected, then see what is happening."

The destiny of this season's Premier League title will be decided LIVE on Sky Sports this Sunday - just one piece of drama playing out on a wonderful weekend of sport. Add in the Spanish Grand Prix, the Sky Bet Football League play-offs, the Players Championship, La Liga title race and more and Sky Sports is the only place to be. You can upgrade to Sky Sports or buy a day pass through NOW TV to watch all this fantastic live action.

Borini believes he has proved he can be a success in the Premier League after failing to hit the heights at Liverpool following his big-money arrival from Roma.

"It has been a great season," added Borini. "I've had 39 appearances after a year when I was injured.

"It was a hard season and the hardest I've ever had because we have been constantly fighting, but this builds your character.

"It makes you a lot stronger. You learn how to suffer and how to get out of hard situations and that builds you and gets you ready for anything.

"I have always thought I was a Premier League player. Liverpool wouldn't have bought me otherwise. The injuries I could not control. This season I was injury free and I've showed I can play."