Jose Mourinho insists Fernando Torres - scorer of Chelsea's winning goal at Cardiff - is in his plans for next season.

The Spain striker struck in the 75th minute of Sunday's final-day Premier League clash in south Wales to give Mourinho's Blues a 2-1 victory.

Torres has reportedly become one of Inter Milan's top summer transfer targets and the 30-year-old - who cost Chelsea £50m three-and-a-half years ago - has only two years left on his Stamford Bridge contract.

But when asked if he intended to keep Torres after the win at the Cardiff City Stadium, Mourinho maintained he is happy with his efforts even though Sunday's strike was only his fifth in the Premier League all season.

Mourinho repeated that he does intend to bolster his attacking options in the summer, but that does not necessarily mean he is looking to move anyone on.

"I keep saying the same - yes," added the Blues boss, when asked if he was looking to recruit a new forward. "I think everyone knows.

"Samuel Eto'o was here with only a one-year contract -a different situation than Fernando and Demba (Ba). Of course, we want to bring a new striker in for next season, but the players we have are (under) contract.

"And the way Nando and Demba are, they understand what Chelsea is, what the team ethic is and the way they work for the team when they are on the pitch. They are players we are happy to keep."

Ashley Cole was made captain for the day at Chelsea, and Mourinho could not say what the future holds for the 33-year-old left-back, who has been with the Blues since summer 2006.

"Let's see what happens now," he continued when asked about Cole being skipper. "It's time for that. 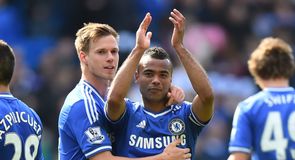 "No Lampard today, no Terry, so he (Cole) was the player with more time at Chelsea. And I think he's the kind of guy that when he has the armband, Chelsea supporters are happy to see him with it."

As for the manner of Chelsea's come-from-behind victory, Mourinho explained: "I think the boys found the right energy to play, which is not easy to find when you don't have objectives.

"What we couldn't have in the first half against Norwich, for example, last week... the boys found the right mental approach. They played really well. At half-time, we were losing but we were playing good quality football, having chances - and Cardiff were without a shot but were winning 1-0. In the second half, the team had the mentality to persist and even to increase the pace and the dynamic. 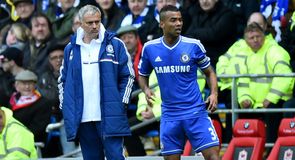 Mourinho: Could not confirm Cole's future

"This is very much a deserved victory that means nothing for us because the third position was there. But it means we have a good feeling, the boys have played well and to finish the season with victory is better than a defeat."

Mourinho also gave his final assessment of the season, and the positives he can take from the third-place finish.

"I am pleased with many things," he concluded. "And I am pleased fundamentally because we have a certain base in many aspects.

"A certain base to start the next season, and when I refer to the base, it's not just about the players or the tactical system.

"It's also about the team ethic - the way we work, the way we behave, the way the team trains every day. So I'm really happy because we have a base and we can start next season with a different approach."