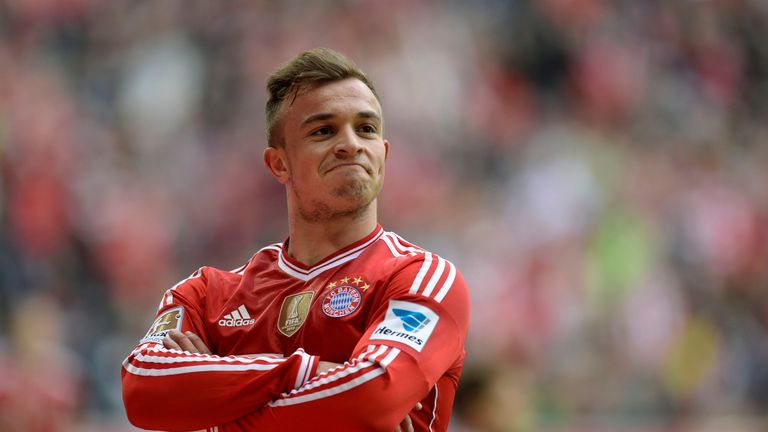 Xherdan Shaqiri says Liverpool saw an offer for his services knocked back by Bayern Munich prior to the World Cup.

The Switzerland international has long been linked with a move to Anfield, with the Reds said to have been keen before he left Basel for the Allianz Arena in 2012.

Shaqiri has been a regular part of a successful side at Bayern in the last two years, but starts have been hard to come by at times.

"Liverpool made a bid for me before the World Cup but Bayern put their foot down and told me, ‘We’re not going to sell you’."

That has sparked regular rounds of speculation suggesting that he may be allowed to move on.

Bayern, though, have resisted all approaches so far, with Shaqiri now prepared to assess his options in the New Year when another window of opportunity presents itself.

The 22-year-old playmaker said: “Liverpool made a bid for me before the World Cup but Bayern put their foot down and told me, ‘We’re not going to sell you’.

“My contract runs until 2016 and I could possibly extend it.

“I will consider my decision during the winter break.”

For now, Shaqiri’s focus is locked on a European Qualifier with England, with Roy Hodgson set to bring a new-look side to the St Jakob Stadium on Monday.

He added: “I expect England to come over with a lot of young players who aren’t yet so well known. They will want to repair the damage after not doing well at the World Cup finals.

“They will come over to Switzerland looking to win. But we will play our normal game – and we’ll be going for victory too.

“We are familiar with our formation as a team and we know what we have to do.

“The coach Vladimir Petkovic has told us he doesn’t need to make big changes for the England game.”