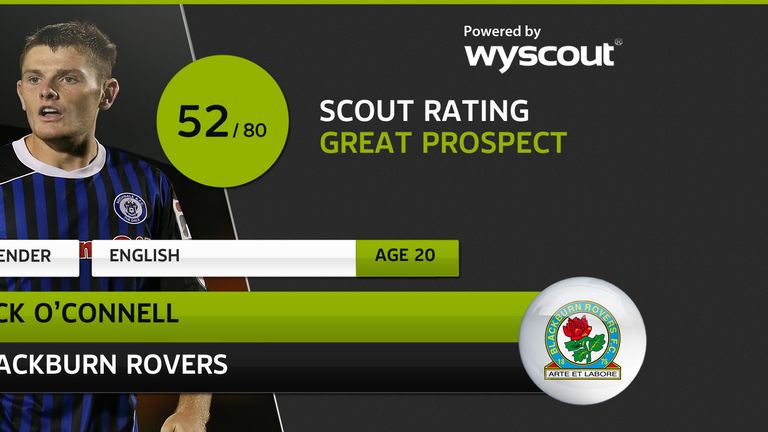 Sky Sports Scout is our exciting feature where we scour the globe, in partnership with Wyscout, looking out for the best talent and bring you a report on what we find.

Our scout - using all the tools at his disposal, which now includes the world's leading scouting resource Wyscout - will report back and you can comment on what you think of their appraisal.

The latest player to be spotlighted is England youth defender Jack O'Connell.

Jack O'Connell has been hugely impressive for Rochdale this season. We take a close look at the young centre-half attracting a lot of interest with his performances.

Liverpool-born O'Connell is an unusual case, given that as a youngster he almost slipped through the net, and was not picked up by any club until he was 18.

O'Connell played local football on Merseyside before coming to the attention of a number of sides in the north west and, by the summer of 2011, he had a number of offers on the table before he opted to join Blackburn's academy.

A year after signing, he was handed his first professional deal and months later he was making his league debut, but with Rotherham United, who he joined on a three-month loan.

By this point O'Connell's displays for Blackburn's second string had also attracted attention from England's coaching team, and he was capped by the Under-18s.

After returning from his spell with Rotherham he was snapped up by York City, where he spent five months and really emerged as a real prospect.

Rochdale agreed a six-month loan deal for O'Connell last summer, which was soon extended to the full campaign, and his displays at Spotland have not gone unnoticed. Indeed he has also been handed the captain's armband by Keith Hill, such has been his progress.

He has also captained England's Under-19 side as he continues to be recognised at international level.

O'Connell is a cultured defender, and has a real touch of class about him as he often looks to bring the ball out of defence before looking to open up play.

O'Connell, who is also capable of operating at full-back, has an excellent left foot and he uses it with great effect to often try and switch play from the back.

Despite his inexperience, O'Connell has come on hugely in the past 18 months and he looks destined for a high level and it will be a shock if he is not involved with Blackburn in the Championship next season.

An outstanding prospect, who has made great strides since joining Blackburn. Very much one to watch and already has a number of Premier League clubs monitoring him.

You have read our opinion of Jack O'Connell - now we want your views. Have you seen O'Connell in action? Do you agree with our assessment? Do you think he will make it?

Pick your Sky Sports Fantasy Football team for the chance to win over £100k in prizes. Play for free here.