"The game is full of small margins and throughout if you can win those moments then the game can change very quickly"; New Zealand captain Kane Williamson labelled Australia a "world-class outfit" ahead of the T20 World Cup final in Dubai; watch from 1pm, Sunday on Sky Sports Cricket 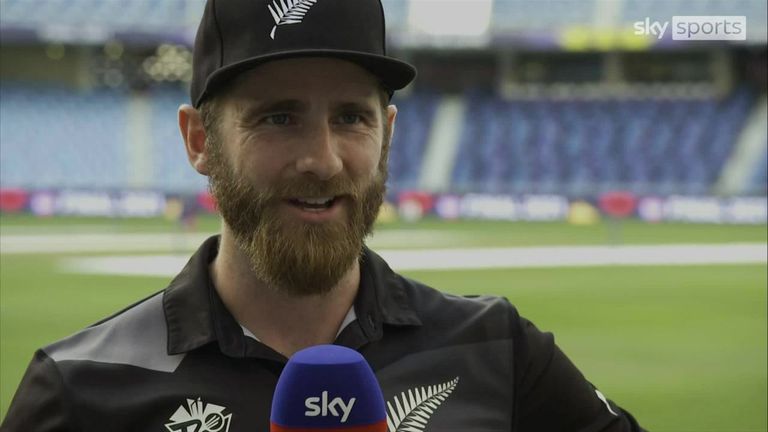 Kane Williamson highlighted the “small margins” as he urged his New Zealand side to focus on playing their own game against a "world class" Australia team in the T20 World Cup final.

The Black Caps are playing in their third World Cup final in six years, their first in the T20 format, and also won the World Test Championship final in June so are well versed in the intricacies of such showpiece events.

Following their infamous defeat to England on boundary count after a Super Over in the 2019 World Cup final, New Zealand also know how fine the line can be between victory and defeat and Williamson says conditions in the UAE ensured that is the case again.

"[The conditions] have required adjustment and the games here in Dubai have been fairly similar to what you'd expect, certainly when you've come here to face Pakistan in the past," the New Zealand skipper told Sky Sports. "It was a fantastic semi-final that they had.

"The pitches have been what they've been but the conditions and perhaps some dew and these things, little bits and pieces - the game is full of small margins and throughout if you can win those moments then the game can change very quickly. We probably saw that in both semi-finals."

New Zealand's last-four clash against England saw them get over the line with an over to spare, having needed 57 to win with four overs remaining but Williamson insisted he never thought the game was lost.

"No, I didn't think we were done and dusted," he said.

"Having wickets in hand and a small side [of the ground], there is always that belief that an over of 20 can break the game open and, at most venues, although there hasn't been a lot of rhythm to batting, probably across the board, there has been the odd individual who has played that knock, there has still been that possibility.

"The timing was obviously immaculate, and it was very helpful for us! But it was a really great game of cricket, some smart batting at the end and some really clean striking, that's sort of what the game is about and in finals cricket, the difference, those small margins."

That victory set up a final against their Trans-Tasman rivals, who enjoyed a remarkably similar win over Pakistan in their semi-final, with the chance to claim the Kiwis' first World Cup title.

"A really exciting opportunity and you come into these tournaments that are so competitive and you know from the outset that any team can beat anybody, you're playing at different venues and schedules are tight," Williamson added.

"The focus is always what is right in front of you and as a team, they've bought into that really well and adjusted well to the different conditions and competed really well throughout.

"It's really nice to be here on the eve [of the final] and all the team are really looking forward to the final against a really strong team in Australia. "I think it's part and parcel of international cricket these days that you know a lot of each other and you're busy playing each other all of the time - but you throw in the context of tournament sport and it makes it a little bit more special.

"They're a really strong side, match-winners throughout and they've come here and built throughout this tournament.

"You go into those pool stages and only two go through, so it is a tough trial to try and rise to the top of that and both teams have managed to do that.

"Australia have definitely been improving throughout. They're a world-class outfit and so for us it is really about trying to focus, work on the things we've been doing well and play our cricket."

Williamson, who confirmed wicketkeeper Tim Seifert will replace the injured Devon Conway, added: "It is looking to apply ourselves the way we want to and it's a really exciting occasion, a final, they're great opportunities and the team is really looking forward to it."