Kagiso Rabada is doubtful for South Africa's Test series with England after suffering a medial ligament injury in his ankle; watch every ball of the three-match series live on Sky Sports, starting with the opening Test at Lord's on August 17

South Africa fast bowler Kagiso Rabada has been ruled out of two T20 Internationals against Ireland this week with an ankle injury and is also a doubt for the three-match Test series against England.

Rabada sat out South Africa's victory in their T20 series decider against England on Sunday with what the team at the time described as a "niggle".

However, ahead of the start of the two-match contest with Ireland, the issue has now been confirmed a medial ligament injury in his ankle.

Rabada is a key strike bowler for South Africa in the longer format and his absence would be a huge blow to the tourists' hopes of success in the England series, which starts at Lord's on August 17, live on Sky Sports.

Cricket South Africa said on Tuesday the 27-year-old would be closely monitored ahead of the Test series but offered no time frame on a potential return to action. 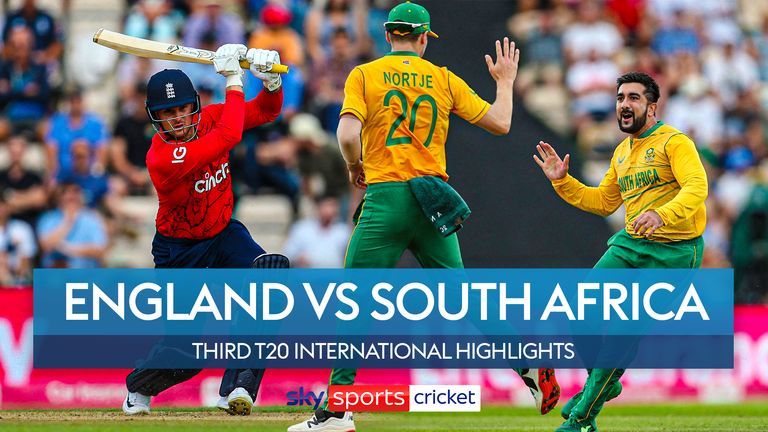 Highlights of the third T20 international between England and South Africa.

He is definitely out of the T20 games against Ireland that will be played in Bristol on Wednesday and Friday.

South Africa will look to cement their lead in the World Test Championship with a series win against a resurgent England, who have been fearsome with the bat under new coach Brendon McCullum, beating India and New Zealand in their last four Tests.