India require a further 381 runs on the fifth and final day in Chennai to complete a record run chase; England need nine wickets to wrap up the first Test, as Joe Root's side eye a first win in India since 2012; follow text commentary on Sky Sports' digital platforms from 3.55am

The first Test is fascinatingly poised heading into the fifth and final day in Chennai. India need another 381 runs to complete a record run chase, while England require nine wickets to register a famous win.

Joe Root's men remain in pole position to claim a sixth consecutive victory in the subcontinent following four absorbing days of Test cricket, but recent history will alleviate any prospect of complacency.

The tourists boasted a first innings lead of 241 after bowling the hosts out for 337 early on day four, and rather than enforcing the follow-on, Joe Root's side opted to bat again. 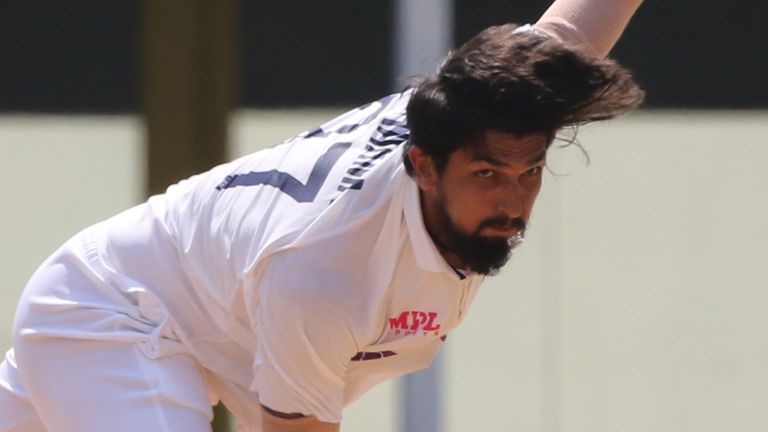 If we get a good start then I am sure we can chase this down. We have a fearless batting line-up so we are very positive.

Root top-scored with 40 as England were dismissed for 178, and although their approach in the latter stages of the innings caused conjecture, they set India an ominous target of 420.

Rohit Sharma (12) and Shubman Gill (15no) punished a tentative start from England by racing to 25-0 from five overs, but Leach made the crucial breakthrough with a beautiful delivery that turned past Rohit's straight bat and clipped off stump.

Gill survived alongside the tenacious Cheteshwar Pujara (12no) as India closed on 39-1, and although their task appears improbable, it is not insurmountable given recent history, especially given the star-studded batting options at their disposal.

The hosts will take encouragement from last month's exploits against Australia, which saw Rishabh Pant make an unbeaten 89 as they achieved a record chase of 328 at the Gabba to claim a historic series success.

Pant reaffirmed his destructive potential with a blistering 91 from 88 balls in the first innings in Chennai, which may have contributed towards Root's reluctance to declare just after the tea interval.

If India require any further inspiration for a record-breaking run-chase, they need to look no further than the West Indies, who pulled off a miraculous triumph in the first Test against Bangladesh on Sunday.

Despite a multitude of absentees, West Indies chased down 395 to prevail by three wickets in Chittagong, as debutant Kyle Mayers scored a sublime 210 not out to guide his side to the fifth-highest run chase in red-ball cricket.

India's latest assignment would constitute the highest fourth innings chase in Test history, surpassing their previous best of 387 - ironically achieved against England in Chennai - for the loss of just four wickets in 2008.

However, there are plenty of reasons for optimism from an England perspective. While the volatility of the fifth-day pitch is not comparable to the surfaces in Sri Lanka, the wicket is certainly deteriorating.

Jasprit Bumrah and Ishant Sharma were able to generate the type of reverse swing which will interest England's formidable pace trio of James Anderson, Jofra Archer and Ben Stokes - despite the latter being used sparingly in the first innings.

Dom Bess and Jack Leach will also have a vital role to play. Both men are bidding to establish themselves in England colours against world-class opposition, and this represents the perfect opportunity to do just that.

Ravichandran Ashwin (6-61) found plenty of sharp turn to snare his 28th Test five-wicket haul in England's second innings, while Leach and Bess displayed promising signs during their respective spells to round off day four.

The concern for England's spinners may be consistency. In and amongst some magical moments, there have been spells of mediocrity, perhaps another factor behind Root's desire to amass as many second innings runs as possible.

Bess came of age to claim the wickets of Kohli, Pujara, Pant and Ajinkya Rahane on day three, although his erratic length early on day four saw Root enter the fray himself; his part-time spin may yet prove to be a valuable option.

Leach endured a chastening experience at the hands of a merciless Pant 24 hours earlier, yet the Somerset spinner appeared unperturbed, making amends by dismissing Ashwin, Nadeem and Rohit in emphatic fashion.

There has been scepticism surrounding Bess and Leach and how they would match up against India's more seasoned spinners, but they have acquitted themselves impressively thus far, displaying plenty of character, resilience and skill.

Jon Lewis - part of England's coaching set-up in India - was full of praise for Leach's response to a difficult day three, and he believes the 29-year-old will have a key influence in proceedings as England chase a first win in India since 2012.

"Jack showed his character with the way he came back after Rishabh Pant got after him," said Lewis. He's bowled an absolute beauty to get out Rohit - who is obviously a class, class player - and he looks a real threat on this pitch.

Victory for India would see them register the highest successful run chase in Test history. The current record is held by West Indies, who chased down 418-7 to defeat Australia in 2003.

"He could walk away with four or five wickets and we could win a Test match - I'm pretty sure people won't be talking about Pant's first-innings runs if he does that."

If Pujara and Gill are able to navigate an early barrage, that could give their heavy artillery licence to attack later in the day, but a spate of early wickets and suddenly India's focus is centred around survival.

Gill and Pujara were integral to their run-chase at the Gabba, and England are well aware of their opponents' unrivalled batting depth.

Washington Sundar's half century is the 50th time since the start of 2015 that a batsman batting at 7 or lower has passed 50 against England. No other team has conceded more 50+ scores against lower order batsmen in that time. #IndvEng

Despite making early inroads into India's top-order, the hosts still batted for 96 overs in their first innings - Washington Sundar was coolness personified as he finished unbeaten on 85, while Ashwin provided stoic resistance at No 8.

Nevertheless, if England were offered this position prior to the toss on Friday, they would have grabbed it with both hands.

They've dominated for large spells against a side so often impenetrable on home soil - now it's a case of finishing the job.

They have the firepower, and the conditions are in their favour. It promises to be a thrilling climax to an enthralling first Test.

Follow over-by-over text commentary of day five of the first Test between India and England on the Sky Sports App and skysports.com from 4am on Tuesday.