In England's side of bright young things and established campaigners, Joe Denly is the anomaly.

Green in games played (13) but experienced in age (33), he is neither one for the future nor one with a glittering list of past Test achievements.

It is sometimes hard to view Denly as nothing more than a stopgap.

England's No 3 for now with Joe Root making it patently clear he has no desire to bat first drop, England's No 3 until someone younger makes a more compelling case. Only there because the national selector, Ed Smith, thinks he has "a touch of class in his DNA."

But England's Mr Malleable has never let the side down and probably warrants a long run.

Denly has opened, batted at three and featured at four in his nascent Test career to date and even burgled some key wickets with his part-time leg spin in the win over South Africa at Newlands.

He is also a solid hand in the field, save for that absolute horror show he had on the final day of the series against New Zealand in Hamilton when he somehow dropped Kane Williamson at midwicket.

The Test average, which stands at 31.04 after the first innings in Port Elizabeth, could be higher but it is higher than the Test average of the men who have tried to cement spots in England's top six before him from a similar number of matches.

Denly has made double figures in all but three of his 24 Test knocks and also displayed guts and grace in an England flannel, principally in The Ashes.

He battled hard against a fine Australia attack in that clash at Headingley with his gritty fifty helping keep England in the game before Ben Stokes played a knock that may never be bettered.

He then played fluently at The Oval, mixing classy drives, effortless flicks off the pads and an excellent method against Nathan Lyon's spin en route to his highest score yet of 94.

Therein lies a problem, though. Three figures continue to elude him with none of his six half-centuries turned into something more substantial.

How long will England stick with a No 3 who doesn't score hundreds, particularly one nearing 34? That said, England No 3s have only scored three hundreds in the best part of five years, since Gary Ballance made a ton in the West Indies in April 2015. Two for Root, one for Jonny Bairstow.

The competition is beginning to increase, however, especially with England now having three openers who look up to the task.

The reliable Rory Burns will surely return to the reckoning once the ankle injury he sustained playing football - one which has ruled him out of the rest of the South Africa tour as well as the two-Test assignment in Sri Lanka in March - has sufficiently healed.

England also have two potential gems in Dom Sibley and Zak Crawley and if all three are to play, Denly may have to be the fall guy.

Burns and Crawley, in particular, may not get bogged down the way Denly did during his last three Test innings, when he faced 100 balls or more in each of them and yet had a top strike rate of just 29.23.

"Denly has become Mr Consistent for England but what he struggles to do is manoeuvre the ball around," said Sky Sports Cricket's Michael Atherton on day one at St George's Park.

"In contrast to Root, he is a bit more block, block and then look for the big shot, but South Africa had cut off the big shot, so he is thinking 'where is my get out of jail shot?'

"He is a typically English player with firm wrists, so it is about improving as a player. He maybe in his mid-thirties but you can still look to improve." 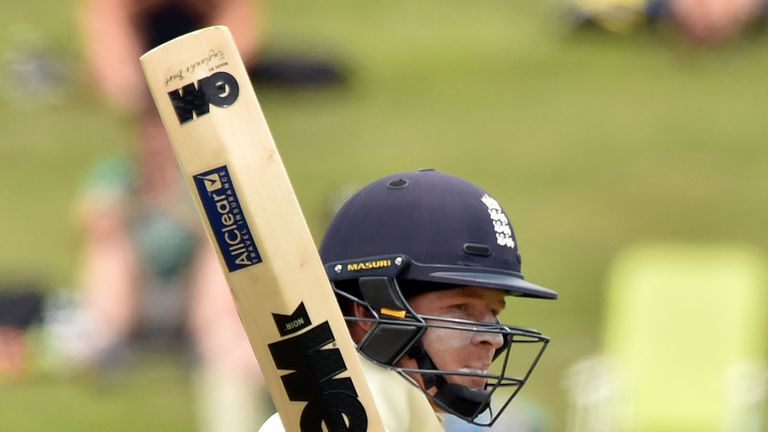 I think he can move up the order immediately. He can bat at No 3 quite comfortably as he has a good technique and the right attitude.

Mid-thirties and improving sums up Ollie Pope's Test average and the Surrey man is another contender for the No 3 spot that Denly is struggling to take an iron-clad grip on.

Positioned at six since returning to the England Test side in New Zealand, Pope has impressed with his shot-making ability and playing of the situation - his unbeaten 61 as wickets tumbled in England's first innings at Cape Town proved extremely useful indeed.

Pope was placed into the England team at No 4 in 2018 despite never having batted that high for his county but has made the move up the order to No 4 for Surrey since returning from a shoulder injury at the backend of 2019, albeit that an unbeaten 221 against Hampshire came at No 5.

Sky Sports' Nasser Hussain was glowing in his praise of Pope's off-side skills after his Cape Town fifty: "I found it refreshing to have a young man come in who wasn't robotic, wasn't over-coached, who had an off-side game and who got the tempo of his batting spot on."

Pope seems like a batsman who can soak up pressure, adapt to different situations and keep the scoreboard ticking over, all the traits you want from an agenda-setting No 3.

Ben Stokes - Pope's partner in an unbroken fifth-wicket stand of 76 on day one in Port Elizabeth - has similar qualities but if he is to continue bowling regularly then first drop might be a touch too high for him.

As it stands, it seems unlikely England will make a call over Denly until the end of the spring meetings with Sri Lanka, with his leg-spin likely to prove a useful tool on turning tracks and Burns currently crocked.

But come the English summer, with Burns fit, Crawley and Sibley more experienced and Pope potentially off the back of some mammoth scores batting high for Surrey, the pressure will be on Denly big time.

He's malleable, he's consistent, he's done better than many others but he needs a big score.

Watch day two of the third Test between South Africa and England, at Port Elizabeth, live on Sky Sports Cricket from 7.30am on Friday.