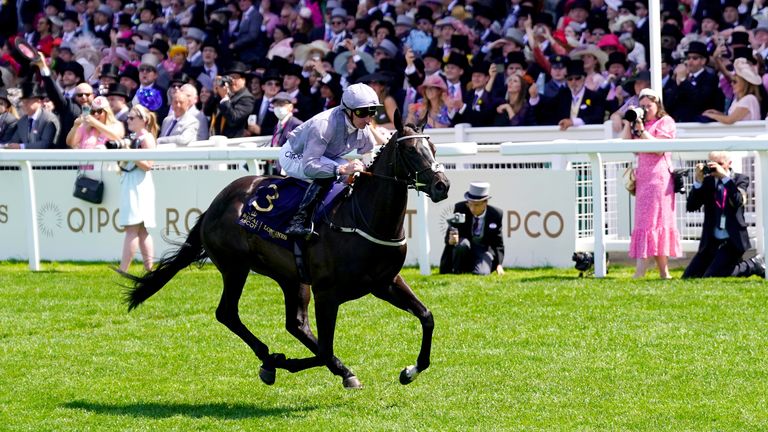 Jockey Danny Tudhope celebrated his third winner in two days at Royal Ascot as Dramatised blew away her rivals in the Queen Mary Stakes.

Favourite Dramatised destroyed her rivals in the Queen Mary Stakes to make a blistering start to day two at Royal Ascot.

Jockey Danny Tudhope will not have been fancied by many for leading rider of the week but enjoyed a double on Tuesday and added a third winner to his tally as Karl Burke's filly stretched away from the field and never saw a rival, justifying her 5/2 starting price.

The daughter of Showcasing, drawn on the stand's side in 17, looked a simple ride for Tudhope, with the rider asking his mount to push on from the two-furlong pole and getting an instant response.

Even the loss of Tudhope's whip for the final furlong was not enough to stop the winner as she finished comfortably a length and three-quarters clear of Maylandsea, with Maria Branwell third and Love Reigns back in fourth.

Tudhope told Sky Sports Racing: "It's a huge weight taken off my shoulders for this week. This filly came in with a big reputation and has been training great.

"She can be quite highly-strung but was nice and calm today. That was the most important thing.

"I probably went a bit too soon and I threw my stick away, so not ideal.

"She's going to be top class, right up there. She's one of the fastest two-year-old fillies I've ridden and one of the best. She's in great hands."

Burke said: "She's shown us that all the way along, physically since Newmarket she's done nothing but strengthen and improve. I thought she looked in great condition today, she ran like I dared to dream and hope she would.

"She lengthens and she keeps going. I'm sure she'll stay six furlongs, although Danny said to keep her at five furlongs for the moment.

"There's still more to come from her. She has physically grown over the last two months and she is a very good filly."

On plans, the North Yorkshire handler said: "Her work has been excellent - she's a bit of a diva, so we've just had to keep a lid on her, but she handled everything really well.

"She's the quickest two-year-old I've trained over five furlongs, but I'm sure she will stay six. The Lowther and Morny could be options for her and later in the year the Cheveley Park."

Following a nightmare start aboard King's Stand favourite Golden Pal on Tuesday, there was further woe for Irad Ortiz Jr, who was banned for five days for his ride aboard Love Reigns.

The stewards judged him guilty of careless riding after his mount drifted left-handed, causing Omniqueen to clip heels in the resulting congestion, with Ortiz Jr banned from June 29 to July 3 inclusive.