William Buick has warned his Grand Prix de Paris rivals there could be yet more to come from hot favourite Hurricane Lane after the pair's impressive victory in the Irish Derby.

Charlie Appleby's three-year-old showed real battling qualities to get past Lone Eagle at the Curragh last month and bids to double up his Group One tally after being supplemented at Parislongchamp on Wednesday.

Winner of the Dante Stakes at York, the Frankel colt was subsequently third behind stablemate Adayar in the Cazoo Derby at Epsom, before claiming Classic glory in the Irish equivalent - flying home late, to snatch victory in the shadows of the post.

The front two that day had pulled well clear of the rest of field, headed by Aidan O'Brien's Wordsworth in third - who reopposes in France.

On Hurricane Lane's chances, Buick told Sky Sports Racing: "He's a horse who is still lightly-raced and he's probably still on the up.

"He's taking on horses again that came from the Irish Derby that he beat well and some of them he hasn't run against yet.

"These are three-year-olds and most of them are relatively lightly-raced, Hurricane Lane included, so there's going to be horses with potential still there.

"You'd expect it to be a good race but the team at home have been very happy with him and I'm really looking forward to it."

No rain worries for Via Sistina

Earlier on the card, Buick is also booked to ride Joe Tuite's impressive Goodwood winner Via Sistina in the Prix De Malleret.

It could prove to be a landmark day for Tuite, who goes in search of a first Group Two victory. 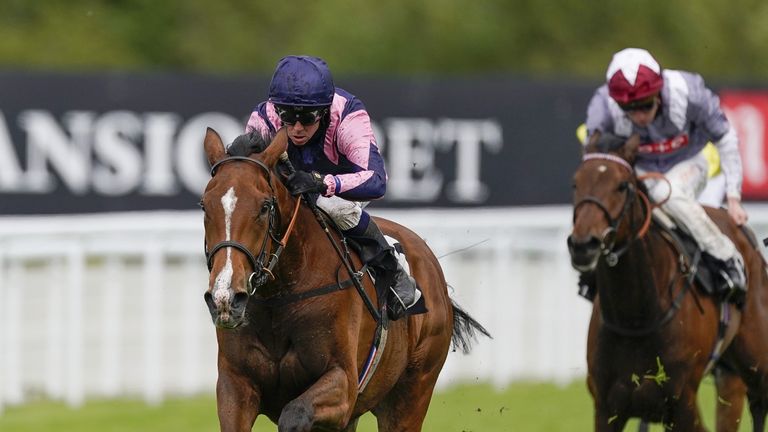 Trainer Joseph Tuite has no concerns about the ground at Parislongchamp as he sends Goodwood winner Via Sistina to the Group Two Prix De Malleret, live on Sky Sports Racing

Tuite told Sky Sports Racing: "We were very pleased at Goodwood. She impressed more than we thought on the day, doing it easier than we thought. We thought we'd have a bit of competition from the Gosden filly [Chiasma] and we were surprised how easily she won.

"She came home and had a little break because she had two reasonably quick runs and she's quite a big filly. She's thrived for that time she's had.

"She's come out of the race well and it was always our target to go here [Parislongchamp]. She's been training very well, we're happy with her.

"If we do get a bit more rain, I wouldn't be worried about it. We're stepping up in trip for this and we'll see how she fares. If we get a mile-and-a-half well, I'd be more than happy to stay at that."

Buick added: "She's stepping up in class and trip so hopefully that will bring out some improvement.

"There looks to be some nice fillies in there. Most of them haven't run a lot so we don't really know where they're at.

"She couldn't have done anymore, beating the second by five-and-a-half lengths at Goodwood.

"I'm looking forward to riding her. I don't know much about her but she looks to be on the up." Buick had to watch on as his two rivals in the flat jockey's championship race celebrated victories at Bath on Tuesday.

Oisin Murphy moved to 56 winners and extended his advantage over Buick to four with a double on the card, while Tom Marquand - second on 54 - enjoyed a winner in the penultimate race with Kenstone.

Reflecting on the title race, before Tuesday's racing, Buick said: "It's good fun, we're all enjoying it. It's a tough competition so we take nothing for granted. No one is entitled to it

"We're going for it and we're very busy at the moment. Hopefully we can keep the momentum going right until the end.

"It's a long season ahead and you need to have things go right for you but long may it continue."