The clue is the name. Champions Day crowns true champions and none more so at Ascot this year than the brilliant Baaeed, who confirmed his superstar status with victory in the Queen Elizabeth II Stakes on Saturday.

There were no wins for Oisin Murphy but, despite the smallest of scares as William Buick closed the gap to two, the champion jockey had already done enough to successfully defend his title, closing out a dramatic few days for the leading rider.

Elsewhere, it looked like a rare off-day for the legendary Frankie Dettori, who was the subject of plenty of attention after post-race comments from the Italian, as well as trainer John Gosden.

So much was promised from the battle between unbeaten three-year-old Baaeed and five-time Group One winner Palace Pier, a year his senior, and boy did it deliver.

William Haggas' Prix du Moulin champion Baaeed has quickly become the most talked-about horse of this season, having only emerged on the scene in June and conquering all before him in the mile division.

His trip to Ascot was always going to be his toughest test to date, up against John and Thady Gosden's stable star, whose only previous defeat had come in the QEII 12 months ago when the soft ground conditions went against the son of Kingman. 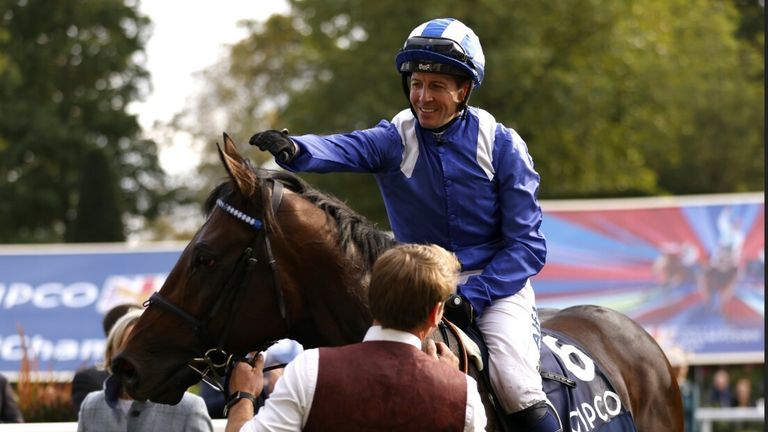 A year on, Gosden senior [John] pointed to an error of judgement from Dettori when asked about defeat to Baaeed - more on that shortly - but on fair reflection, Palace Pier looked to have been beaten fair and square by the new kid on the block.

"He's just a beast, he keeps getting better," said winning rider Jim Crowley, who enjoyed a treble on Champions Day.

Rider error or not, Palace Pier still bows out with his head very much held high as he now heads to stud. As for Baaeed, the new champion, Crowley believes he has it in him to go on and conquer the world.

'It was a disgrace' - Frankie fumes at younger rival

Frankie Dettori tends to have more good days than bad in the saddle but this year's Champions Day will probably be one he will be keen to forget.

The Italian tasted defeat in each of his four rides at Ascot, but felt particularly hard done by as Stradivarius encountered a bumpy route through to third in the Long Distance Cup.

Attempting to keep eventual winner Trueshan within his sights, Dettori made a move on the outside as the field turned into the straight, but found his path temporarily blocked by Baron Samedi.

After the race, an angry Dettori vented his frustration at Baron Samedi's young rider Dylan Browne McMonagle. "The kid in front did everything he could to get me beat," Dettori said. "It was a disgrace."

Defending himself, Browne McMonagle bit back: "I just pulled my horse out for a run and I didn't have enough under me to go through with it. Look, that's race riding and that's how it goes."

Dettori was later the subject of criticism from John Gosden when reviewing the ride on Palace Pier, saying there was "too much looking around" from the jockey. Gosden added: "Frankie said the pace was slow - it was too slow. He regrets not committing earlier."

Champions Day for Oisin Murphy began with headlines in two tabloid newspapers, reportedly detailing the events of an alleged Newmarket pub incident the night before the leading rider failed a breathalyzer test at the town's track.

In a brief reaction to the story, Murphy told the Daily Mail he must no longer "turn to alcohol" to deal with bad days in the saddle and the pressures of competing for the jockeys' championship. This year's title race has been particularly dramatic with rival William Buick taking the fight to the final day, albeit requiring the kind of late turnaround that would have rivalled Manchester United's 1999 Champions League heroics.

Despite Buick keeping his thinnest of hopes alive and cutting the gap to two with victory on Creative Force in the Champions Sprint, Murphy's title was confirmed as Adayar failed to land the Champion Stakes. As Murphy lifted the trophy for the third consecutive year, the champion jockey was visibly relieved to have finally crossed the line.

The plan now, according to David Redvers - racing manager for Murphy's employer's Qatar Racing - is to "breathe and regroup" as Murphy takes a short break before attention turns to international targets this winter and a potential fourth title challenge next year.

Baaeed may have stolen the show with his QEII victory but the feature race of Champions Day 40 minutes later, the Champion Stakes, provided another top finish as Sealiway took the £700,000 prize.

Trained by Cedric Rossi - who claimed his first Group One just 13 days prior when Rougir landed the Prix de l'Opera on the Arc undercard - and ridden by Mickael Barzalona, the three-year-old became the third French winner of the race since it was moved to Ascot 10 years ago.

At a starting price of 12/1, Sealiway's victory was a minor shock but the warning signs were there with his fifth-placed finish in the Arc earlier this month. 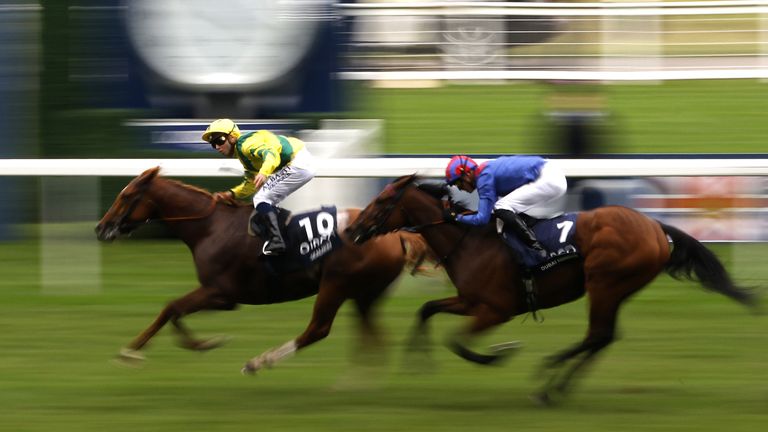 The result may have surprised a few punters, with home favourites Mishriff and Adayar only fourth and fifth respectively, but the French raiders had arrived with plenty of confidence.

"It's beautiful," said Rossi. "The Arc did him the world of good and he was ready for this. He recovered really well from Longchamp and we came here with the thought of winning it."

Having now earned his win-and-you're-in place in the Breeders' Cup Turf at Del Mar, Rossi added that a US trip is "possible".