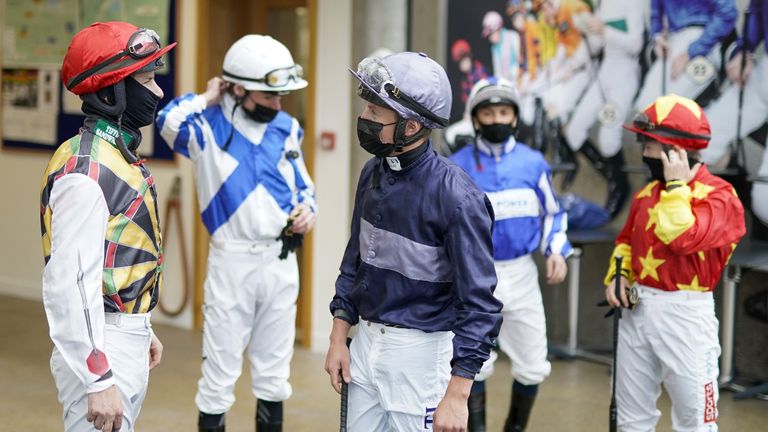 Weighing rooms across Britain are set for a major overhaul after the British Horseracing Authority (BHA) agreed plans to "modernise and improve" facilities.

Tuesday's announcement comes after strong criticism from former jockey Lizzie Kelly, who claimed some current facilities are "not fit for purpose", particularly for young female riders.

Weighing room culture has been under scrutiny in recent weeks after details of an investigation involving allegations of bullying made by Bryony Frost against fellow jockey Robbie Dunne were leaked to the media. The case is set to be heard by the BHA on Tuesday, November 30.

Private changing and shower facilities for jockeys, particularly for under-18s

Reflecting on the case, Kelly wrote in the Daily Mail last week explaining how, in her view, the physical layout of many weighing rooms, which often require female jockeys to enter the male changing rooms in order to access valets, can lead to young female riders being put in "uncomfortable situations".

Under the BHA plans, weighing and changing room areas will be reconfigured to include private changing and shower facilities for jockeys, particularly for under-18s, while new communal working space for valets will also be added to be equally accessible from both female and male changing rooms.

The adaptations will be introduced on a phased basis, with plans in place to ensure that by October 2024 all racecourses have additional private changing and shower facilities in male and female changing rooms, shared communal warm-up areas for jockeys and sufficient flexibility to adapt changing room sizes according to varying numbers of participants and to changing societal needs.

Racecourse saunas, which have been out of operation since COVID-19 safety measures were introduced in June 2020, will also be permanently closed and removed. Former champion jockey Brian Hughes says the permanent removal of all racecourse saunas in Britain is good news, following plans for a major BHA overhaul of the weighing room.

Richard Wayman, the BHA's chief operating officer, said in a statement: "These agreed upgrades are the product of cross-industry collaboration, with jockeys, racecourses and the BHA working together since the beginning of this year.

"The recommendations, which have been endorsed by industry leaders, will deliver substantive improvements to meet the evolving requirements of a modern weighing room environment, catering not just for today's human athletes, but also future proofing for the next generation." Dale Gibson, executive director of the Professional Jockeys Association (PJA), added: "Having consulted with our Members, the PJA supports the permanent closure of saunas. 88 per cent of the 190 Jockeys who responded to our recent survey voted for their removal, with just 8 per cent wanting them to remain.

"The COVID Weight Allowance structure is currently being debated amongst industry representatives, with no immediate changes agreed, it is vital that in remains in some shape or form.

"We have been lobbying for major improvements to facilities, particularly for our female riders, for years. Progress until now has been disappointing, but we welcome the change in approach and a lot of work has gone into the creation of this plan.

"The agreed improvements contained within it will bring all venues up to a defined minimum standard and the result will be improved facilities and a far more professional working environment for all our members".