Billie Jean King: "If you can give someone the gift of tennis, you've given them something for their whole life – the gift of a lifetime." The pioneer talks to British captain Anne Keothavong all things women's tennis

Tennis pioneer Billie Jean King opens up to British captain Anne Keothavong about what equality means to her, having the Fed Cup named after her, and making tennis more accessible for people.

In the interview, the legendary King, who won 39 Grand Slam titles, chats about her hopes and ambitions for the World Cup of women's tennis in the future.

She also shares her memories of playing in the competition formerly known as the Fed Cup, as well as inspiring the next generation to pick up a racket.

Sporting icon King, 77, has long been a champion for social change, equality and freedom and Keothavong was keen to know what equality means to King, not just in the sport of tennis but beyond it.

"It means all cultures, all people have a seat at the table, they have to have a voice and to be heard and we have to listen," said King.

"It's really important to show up, stand up and speak up." 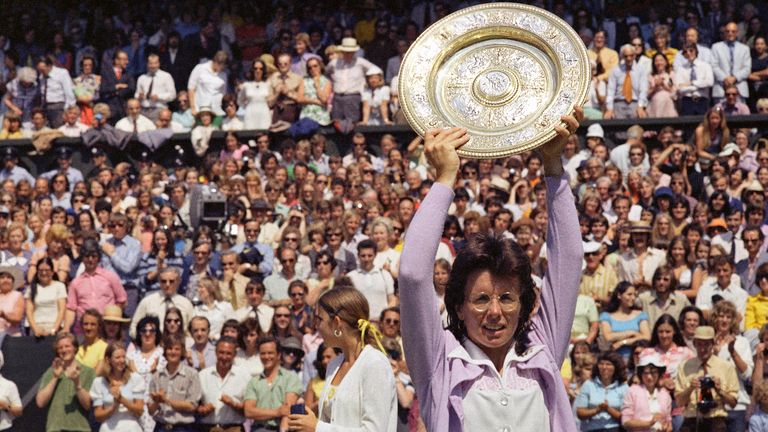 I'm a park child and I would not be talking to you If I hadn't had free access and free instruction in the parks. If you can give someone the gift of tennis you've given them something for their whole life - the gift of a lifetime.

The newly-named Billie Jean King Cup celebrates one of sport's most influential figures - not only for what she achieved on the court, but her fight to grow the women's game.

King revealed she was thrilled to have the competition named after her, saying: "It's such an honour. I still call it the Fed Cup as I played in the Federation Cup in 1963 as an 18-year-old.

"It's such an honour to be such a big part of this - I hope we can listen to people like you Anne and the players, as we want to make this right.

"We want to push forward with gender equality and we want to make it better all the time for the players.

"We also want to help children and young people to become champions in life. I think this competition helps with that as it's a team competition. It's not just about yourself it's about playing for something bigger than yourself - your country.

"Like after the first point they go '15-love Great Britain' Yikes! Like, oh my gosh, don't you remember how thrilling that was?"

As a player, coach and pioneer for social justice, King has paved the way for millions of players and continues to inspire as a women's rights activist.

She hopes the competition can encourage the next generation of players in Britain with Johanna Konta, Heather Watson, Katie Boulter, Katie Swan, Harriet Dart and Jodie Burrage all playing an important part as role models of the sport.

"Any time you play for your country I think people from the country want to watch," said trailblazer, King.

"When you do well globally it helps locally - so if Britain can do well in the World Cup of women's tennis, the BJK Cup then I think it will help locally as it will inspire the young people.

"If you can see it, you can be it and it gives them something to try and get to.

"It's really exciting to see what you guys are doing, though with being more open, diverse and with tennis opened up. All the things you're going to be trying to do to get more people playing - I'm really excited!"

I am still so humbled that @ITFTennis renamed the formerly known Fed Cup as the @BJKCup. It is truly an honor. @annekeothavong and I had a lovely chat about the #BJKCup and how tennis truly belongs to everyone.

Tune in this weekend to watch UK vs. Mexico. 🎾 https://t.co/btxYMAlPpw

King hopes the different programmes in Britain will encourage tennis in all the schools and for every income level of children.

"You can do it - because tennis belongs to everyone," she said. "When they're young if they're introduced to it, it will become a part of them.

"I'm a park child and I would not be talking to you If I hadn't had free access and free instruction in the parks. If you can give someone the gift of tennis you've given them something for their whole life - the gift of a lifetime.

"We really need to make it right for everyone and have inclusion of every culture, everybody."

The LTA hopes that coverage of the tie will inspire the next generation of Billie Jean King Cup players to pick up a racket and play tennis, no matter their age, background or ability.