Emma Raducanu: The British teenager talks about Wimbledon, the US Open and being an 'adrenaline junkie'

British No 1 Emma Raducanu talks to Sky News presenter Jacquie Beltrao about her breakthrough at Wimbledon, her dream US Open triumph as a qualifier, making improvements to her game, and being a big "adrenaline junkie"

Emma Raducanu started 2021 wondering when she would be able to compete again - COVID-19 had put tennis on hold.

At 345 in the world, the Kent A level student was just another teenage prospect, relatively unknown outside British tennis circles.

No one - not even the 18-year-old herself - could have predicted what was about to happen in her life.

"Wimbledon was the first moment I was being competitive on a global scale. Obviously there was so much excitement going on and adrenaline I'd never felt before, because it was the first time," Raducanu told Sky News.

"I was so proud and happy being at home playing in front of home crowd, it was such a special feeling especially out there on Court One, the biggest court I've ever played on, so I was really nervous but I absolutely loved it once I got out there."

Having reached the last 16 at Wimbledon as a wildcard, Emma left the All England Club as a new star of British tennis, who perhaps knew she had to build up more stamina to compete at the top level.

She was unable to finish her fourth-round clash with Ajla Tomljanovic because of breathing difficulties, but it was her first Grand Slam appearance and she was forgiven for running out of gas.

When she arrived in New York ahead of the US Open her expectations were quite modest. Never in her wildest dreams could she have imagined actually winning it!

Raducanu said: "I arrived in New York just hoping to get through qualifying maybe. I was pretty tired. I just had the most amazing time and I think the key to that was I just focused on the day.

"The time flew by, It went so fast by the end of it I was like, 'I don't wanna leave yet, I wanna stay', and it was getting to the latter stages of the tournament and I was thinking, 'but, what if? You're here, so why not?'. But no one made a big deal of it."

The Briton was not at all superstitious until her run at the US Open. In trying to keep everything the same every day she could not bring herself to change her routine.

"It wasn't until maybe the last week when I thought 'Ok' - I was having poke for dinner every single night for three weeks, because I didn't want to take any chances," she admitted.

"The best memories I have of New York is the amount of fun I had out there. I definitely felt I faced my own sort of obstacles and the way I overcame those. For example, the first time I stepped out onto Ashe (Arthur Ashe Stadium) I was quite nervous and didn't realise until I started and got off to a slow start, and then the way I overcame that - by the end I was completely thriving out there in front of so many people." 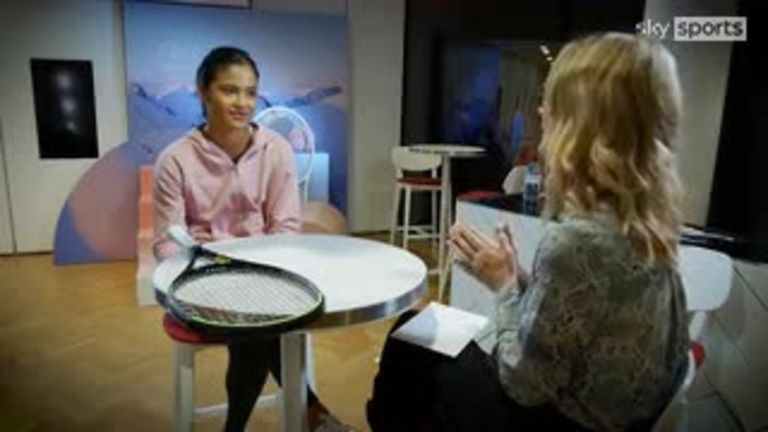 The excitement and hype around her surprise Grand Slam victory led to big new sponsorship deals with the likes of Dior, Tiffany and Evian, plus the inevitable criticism as she parted company with her coach Andrew Richardson, and then made an early exit in Indian Wells.

England rugby coach Eddie Jones suggested her form had suffered because of off-court distractions and subsequently wrote her a letter to clarify his words.

But the Bromley teenager is already developing a thick skin, saying: "I feel like people are gonna have opinions and expectations of me, but I don't really think about that. To me, it doesn't matter.

"It's just about improving and seeing yourself get better and I don't take anyone else's opinions into account except for my close circle."

Raducanu is the first to admit she is far from the finished article. She knows what she wants to improve on in 2022, which will be a constant learning curve.

It will be her first full year travelling on the WTA Tour as the newest member of the world's top 20.

But her non-tennis target will come as a surprise to some.

"I'm a big adrenaline junkie. I have my driver's licence but I'm a big motorsports fan so maybe get my motorbike licence - something speedy and fun," the British No 1 said.

With preparations for the Australian Open now well under way she will barely have time to mark Christmas.

Her life has changed for ever but it is only what she has been working towards since she first picked up a racket.

Emma Raducanu is a global ambassador for Evian water. Don't forget to follow us on skysports.com/tennis, our Twitter account @skysportstennis & Sky Sports - on the go! Available to download now on - iPhone & iPad and Android