Nick Kyrgios: Michael Venus says he can see why Australian has 'never fulfilled his potential'

New Zealander Michael Venus not impressed with Nick Kyrgios' "maturity" level, while Britain's Joe Salisbury believes it's "good for the doubles draw" that Kyrgios and Thanasi Kokkinakis are through to the semi-finals

Nick Kyrgios has the maturity of a 10-year-old, according to doubles opponent Michael Venus following their Australian Open quarter-final.

Kyrgios and compatriot Thanasi Kokkinakis have provided one of the stories of the tournament by reaching the semi-finals of the men's doubles, spurred on by the type of rowdy crowds rarely seen in tennis and certainly not for doubles. 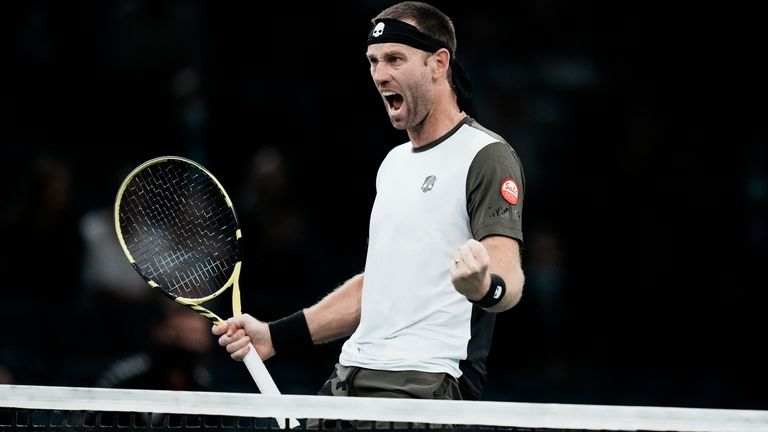 "On the maturity side, you see why he's never fulfilled his potential and probably never will."

The Australian pair defeated German Tim Puetz and New Zealander Venus 7-5 3-6 6-3 in another drama-filled clash on the Kia Arena on Tuesday.

Tensions were high throughout the contest, particularly between Kyrgios and Venus, who earned the ire of the crowd for catching his ball toss on a number of occasions, and Venus did not hold back in his assessment of Kyrgios.

Speaking to 1News in his native New Zealand, Venus said: "On the maturity side, you see why he's never fulfilled his potential and probably never will.

"His maturity level, it's probably being generous to about a 10-year-old. They'll always be his supporters and he'll spin it in a way that helps him but at the end of the day he's an absolute k**b."

Kyrgios and Kokkinakis will move to Rod Laver Arena on Thursday (not before 3.30am GMT) for their semi-final against Spaniard Marcel Granollers and Horacio Zeballos of Argentina.

Should they win that, they could well find themselves in a final against Britain's Joe Salisbury and American Rajeev Ram.

The second seeds are bidding to reach the final for a third successive year having won it in 2020 and been runners-up 12 months ago, and they eased past Italian duo Simone Bolelli and Fabio Fognini 6-3 6-2 in the quarter-finals on Wednesday.

Salisbury said of Kyrgios and Kokkinakis: "I think it is good for the doubles draw that those guys are in it and it gets a bit more attention. A lot of people have been enjoying it.

"I think we are quite happy going along not worrying about that too much. If we hopefully get through and get to play them in the final, it will be a great situation to be in.

"Some of it is borderline. I think it is great to have a lot of support and the crowd really getting into it and getting a bit rowdy but you do want them to be respectful of the players as well. Sometimes it's a bit over the line."

Salisbury and Ram will get a taste of it on Thursday when they meet another Australian duo, Matt Ebden and Max Purcell, who defeated Britain's Neal Skupski and Dutchman Wesley Koolhof 3-6 6-4 7-6 (7-6).

Skupski had been unbeaten in 2022 having won two titles with new partner Koolhof, and he said: "You don't really get to play in front of crowds like that for doubles that often."