Martial, who played a key role in United's late winner against West Ham at Old Trafford on Saturday, had asked to leave the club this month in search of more game time; Sevilla had a loan offer rejected but are now set to sign the 26-year-old forward

Sevilla have reached an agreement to sign Anthony Martial on loan from Manchester United.

The 26-year-old will join the La Liga side - who will pay his wages in full - until the end of the season. There is no loan fee involved.

Martial has arrived at Seville airport, where he was greeted by TV crews and photographers, and will now head to the club to undergo a medical.

The forward always wanted to join Sevilla this month, despite interest from Juventus and Barcelona, because he believes that is where he will play the most.

Martial became the world's most expensive teenager when he joined United from Monaco in 2015 and went on to score 79 times in 269 appearances for the club.

But he fell out of favour in the forward positions following the signings of Cristiano Ronaldo and Jadon Sancho in the summer, as well as the emergence of Mason Greenwood.

Martial has started just four games for United this season, and was accused by Ralf Rangnick, the club's interim manager, of asking not to play in the 2-2 draw at Aston Villa on January 15.

The France international refuted his manager's claim, and Rangnick later insisted the situation was "resolved".

Following Saturday's 2-2 draw at home to Celta Vigo, Sevilla are second in La Liga and just four points behind Real Madrid as they search for their first title since 1946.

'Martial to Sevilla a calculated risk by Man Utd'

Dharmesh Sheth told The Transfer Show why Manchester United may be taking a "calculated risk" by allowing Anthony Martial to join Sevilla on loan...

"It's a straight loan, no loan fee, but Sevilla will pay Anthony Martial's wages in full. He will now have his medical. 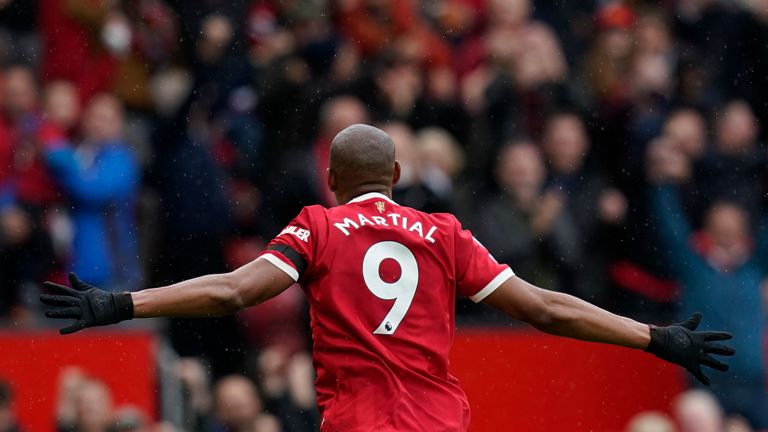 "There's no option to buy here. I just wonder whether this is a smart move by Manchester United because, if they were to do a loan with an option, the price wouldn't be that great. So United may be looking at this as a calculated risk.

"His contract is up in 2024, there's a club option to extend that for a further year. So if he was to go to Sevilla, play regularly, play well, one of two things can happen.

"He can come back to United, who might be under a new manager and that new manager might say, "I like him". If he doesn't, then Martial - if he does play well - will only put his valuation up, and it won't just be Sevilla who will be interested in signing him on a permanent deal come the summer."

European football expert Tom Williams spoke to the Transfer Talk podcast last week about why Martial has been unable to hold down a first-team place at Old Trafford, and revealed which two team-mates he thinks have been holding back the forward...

"There's obviously competition for places at United. I think one of the things that perhaps gets overlooked a bit is how unfortunate Marcus Rashford's emergence has been for Martial, because they're such similar players. But also you've got Mason Greenwood, you've got (Edinson) Cavani and now Cristiano Ronaldo.

"But ultimately you're just not sure how much he wants it. I'm always loathed to judge players on their body language but he's a maddening player to watch, particularly given the amount of ability he has. He's so inconsistent.