Kalvin Phillips came through the youth academy at Leeds; Man City have paid a £45m fee for the England international; midfielder has signed a six-year contract with Pep Guardiola's side; Leeds in advanced talks with RB Leipzig to sign midfielder Tyler Adams

Manchester City have completed the signing of midfielder Kalvin Phillips from Leeds on a six-year contract.

City agreed a basic fee of £42million with Leeds for the England international last month, with a potential further £3m to be added in bonuses.

Phillips, who came through the youth ranks at Leeds, switches to the Etihad Stadium after making 235 appearances for his hometown club over the past eight seasons.

Phillips said: "I am absolutely delighted to have joined Manchester City.

"City have again proved to be the best team in the country with an amazing squad and a manager in Pep Guardiola who is rightly considered to be the finest in the world.

"City are a world-class club with world-class staff and facilities and it's a dream come true to have joined the club."

Phillips is City's fourth new arrival of the summer after the signings of Erling Haaland, Stefan Ortega Moreno and Julian Alvarez.

Phillips rose to prominence as Leeds won promotion to the Premier League in 2020 and went on to establish himself in the top flight. He then played a key role for England as they reached the final of Euro 2020 last year.

City director of football Txiki Begiristain said: "We are absolutely delighted to be able to welcome Kalvin to Manchester City.

"He is a player that we have long admired, and at both domestic and international level, he has proved his fantastic ability and quality over the past few seasons.

"We feel he will be a superb addition to our squad and that he will complement our game perfectly."

The move was also confirmed by Leeds, who thanked Phillips for his long service.

A statement read: "No words can thank Kalvin enough for his efforts whilst at the club and we wish him nothing but success in the future.

"Kalvin inspired so many people in the city, not only for what he did on the pitch, but also for the work he did in the local community.

"He will always be a champion in Leeds, remembered for playing his part in getting the club back to where it belongs and will always be welcome at Elland Road." 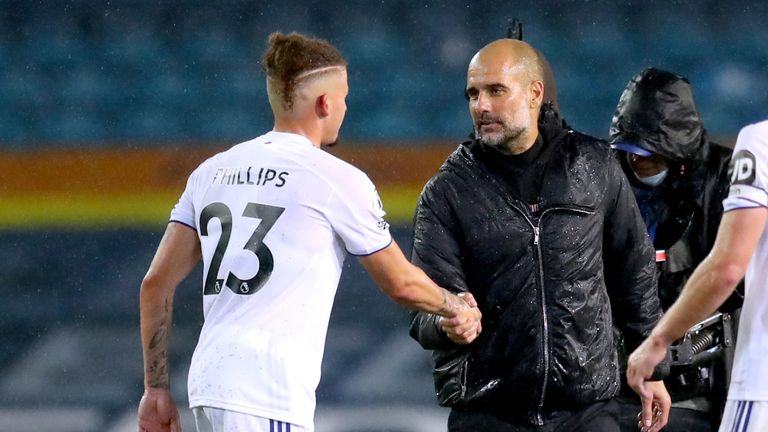 New Manchester City signing Kalvin Phillips says he is looking forward to working with Pep Guardiola having previously described being 'mesmerised' by the Spanish coach.

Phillips issued a further statement in which he paid tribute to Leeds, particularly managers Marcelo Bielsa and Jesse Marsch, and the fans.

He described Leeds as "one of the best clubs on Earth" and that playing for them was a dream and a privilege.

He wrote: "I cannot mention Leeds without mentioning one special person - Marcelo. The best manager I have ever come across. He was a man that gave the club life, he gave the players and everyone involved in the club belief that we were good enough to return to the Premier League after 16 years."

"And now to Jesse, what an unbelievable manager you are, but what an even better person. You came into this club and gave every single player confidence
and belief in a very difficult season and that's what kept us in the league."

To the supporters, he added: "I hope you guys understand my decision and will accept that I only want to chase my dreams and test myself against and with the best teams and best players on the planet.

"As a young kid I had so many dreams and still do... but playing for you was the one I will never forget. You are the best fans in the world."

Leeds later announced the arrival of midfielder Darko Gyabi from City for an undisclosed fee on a four-year deal.

Leeds appear to have moved quickly to replace Phillips with the Whites in advanced talks with RB Leipzig for midfielder Tyler Adams.

The USA international made 24 appearances in the Bundesliga last season.

Mills: 'Outstanding' Phillips will take time to establish himself 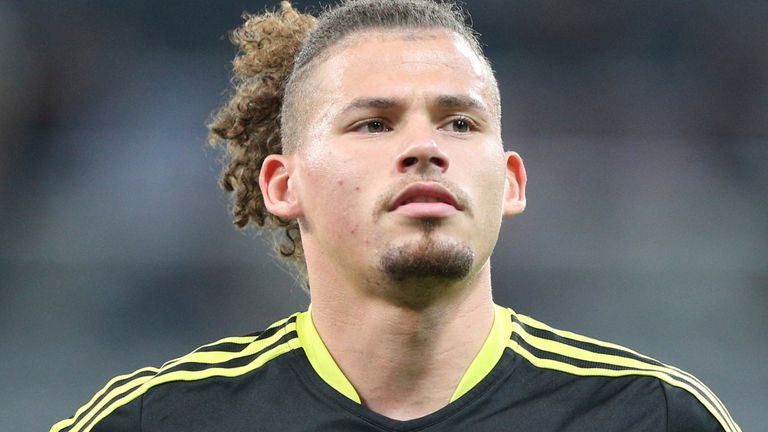 "He's an outstanding player. I think he will go into their squad, but I've said previously that I'm not convinced he will start every game. You've got Rodri in that holding midfield role, it's a very congested midfield as well.

"His first season I think he's going to have to work his way into the team and that's not going to be easy.

"He's still going to play 20+ games next season - a little bit like Raheem Sterling did this year. You have to accept at Manchester City that you are going to be a squad player from time to time.

"I think it's a move Phillips couldn't turn down. He's now going to be playing Champions League football, challenging for the Premier League and other trophies.

"He's at that stage of his career where it's an opportunity that is probably too good to be true, so he had no option really. As much as he loves Leeds, he had to take it."

'Phillips could become a City legend' 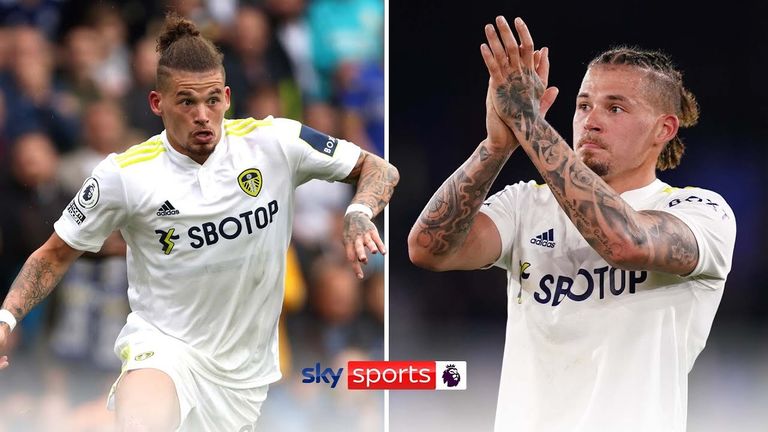 As Kalvin Phillips completes a move to Manchester City, watch the England midfielder's best bits for Leeds United in the Premier League.

"It's a phenomenal deal for someone that has come through the academy, it's been nothing short of an incredible rise.

"On the flip side, it is frustrating from a Leeds perspective as we don't want to see one of our own leaving. He's been a one-club man, leading by example with his performances. It's a shame to see him leaving from a fan's angle but it's an incredible opportunity and one nobody would begrudge him the move.

"It's a great deal for City, especially with Fernandinho leaving. They are replacing a living legend with another potential legend. I think it's a brilliant deal from City's perspective.

"I'm over the moon for him. He's such a lovely guy, a great lad. All the boys will be sad to see him go."

Life after Raphinha and Phillips: What's next for Leeds?

Leeds have been fully aware these moves could happen for a while. They even knew last summer that Marcelo Bielsa could leave the club.

In January, they managed to fight off interest and keep Phillips and Raphinha and they've been planning ever since. They've already made three signings this summer in Brenden Aaronson, Rasmus Kristensen and Marc Roca. Those players would have signed regardless, but there's money in the kitty now.

We expect Leeds to move quickly and bring new players to the club: another midfielder, a winger and a striker to play alongside Patrick Bamford as Jesse Marsch likes to play two up front.

Leeds paid £16m for Raphinha and will look to do the same by buying players early and developing them. That's the strategy. They won't spend £60m to £70m on a player. They've identified targets, they know who they want and they'll move quickly to bring them in.

If Leeds can get three more in then they can argue it's been a good window - even though they've lost two massive players.