Nature Strip produced a blitzing display to win the King's Stand Stakes at Royal Ascot on Tuesday, giving Australia a long-awaited victory at the famous meeting.

Billed as a fascinating international clash between Chris Waller's star sprinter from Down Under and Wesley Ward's American hero Golden Pal, the five furlong dash was expected to produce a tight finish, but Nature Strip blew away all before him.

Sent off 9/4 second favourite, Nature Strip moved to the front by the halfway point and quickly moved well clear under James McDonald, who was riding his second Royal Ascot winner.

There was drama in behind from the very start as Golden Pal, usually fast out of the stall, missed the break and was soon on the backfoot, while Khaadem lost his rider Jamie Spencer leaving the gates.

The rest of the field never got into contention for the win as Nature Strip had only the loose Khaadem for company at the finishing line, winning by with four-and-a-half lengths from Twilight Calls, with 200/1 shot Acklam Express and Mooneista close up in third and fourth respectively.

It is the first Australian-trained winner at Royal Ascot since Black Caviar in 2012.

McDonald said: "That was incredible, the team have done a marvellous job.

"I'm so lucky to be on him and he's just an absolute freak of a horse. I think he's silenced a few critics with that performance because it was scintillating.

"I didn't know the riderless horse was riderless and I was thinking 'how has one come with him?'. He was just incredible.

"I saw the American horse charge through, at the two pole I was thinking 'are you going to come?', but he had no response. It was the riderless horse who gave me a fright."

Waller, who trained superstar mare Winx, said: "It means a lot. We don't get the chance to race against the English, the Irish and even Americans today an awful lot.

"It's pretty special to bring a horse all this way and compete against the best in the world and to win the way he did.

"It was breathtaking, it was a good display and he's a very good horse. He has been for a long time.

"I guess he's in the twilight of his career, but he's learned to be a racehorse now as he was tricky early on. It's an honour to train him.

"Going international is very important to showcase our breed in Australia and of course he's one of the highest-rated horses in the world and it's stacked up.

"We'll see how he is after this and we'll make a decision later in the week on whether he runs in the Platinum Jubilee (on Saturday). This is definitely in the top five wins I've ever had."

Coltrane provided apprentice jockey Callum Hutchinson with his first taste of Royal Ascot success with a battling display in the Ascot Stakes.

A field of 19 runners went to post for the two-and-a-half-mile handicap, with Bring On The Night the 3/1 favourite to provide Willie Mullins with a fifth victory in the race in the last decade.

A neck runner-up to Cleveland in last month's Chester Cup, Coltrane (14/1) was guided to the lead inside the final two furlongs by his 5lb claimer, who punched the air as he saw off the challenge of Bring On The Night and Ryan Moore by three-quarters of a length.

Arcadian Sunrise made late gains to finish the same distance further back in third, with Going Gone fourth and last year's winner Reshoun in fifth. 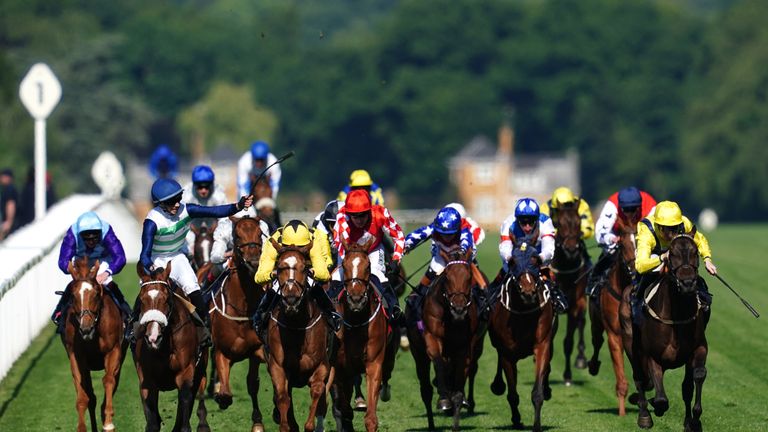 An ecstatic Hutchinson told Sky Sports Racing: "It's unreal, I can't put it into words. Just a big thank you to the boss for giving me a wonderful opportunity. He's been great to me and I've just been kicking on throughout the year.

"The horse has got me out of trouble two furlongs out and kicked on well.

"I saw Ryan coming upsides me and thought that could be game over but he's a tough horse and galloped well to the line. He's a yard legend!"

Winning trainer Andrew Balding told Sky Sports Racing: "I was really happy the whole way through, I thought Callum Hutchinson gave him a beautiful ride. He was always in the right spot and he made his own space like a seasoned pro.

"He's a bit of a yard favourite. He's in the Queen Alexandra but having run in this heat it might be a big ask."

Jockey Danny Tudhope ended the opening day with two wins in as many races.

He combined with Saeed bin Suroor to win the Wolferton Stakes with Dubai Future, who looked far more comfortable stepping down to Listed class.

It provided owners Godolphin a double on the day after Coroebus landed the Group One St James's Palace Stakes.

Tudhope told Sky Sports Racing: "It was my first time on him so I didn't know too much about him. We had a lovely position and it was just nice and smooth.

"I knew I had plenty of horse left so I would've been surprised if something came past me.

"To ride in these colours for Saeed is incredible. I've got a few more nice rides this week for the team so fingers crossed we can get a couple more."

Get Shirty toughed it out to win the finale on day one, the Copper Horse Handicap, for Tudhope and trainer David O'Meara.

Given a patient ride along the far rail by Tudhope, the 16/1 shot battled through a tight gap to challenge for the lead, getting past Quenelle D'or on his outside and holding off the late challenge of 2/1 favourite Cleveland, with Okita Soushi third and Alright Sunshine back in fourth.

Watch every race from day two at Royal Ascot live on Sky Sports Racing on Wednesday, June 15 from 1.30pm.