Dan Evans through to a first career meeting with world No 1 and top seed Novak Djokovic after the Briton recorded his second win in as many days at the Monte Carlo Masters; Evans says he has been "accepting" the clay a bit more this season British No 1 Dan Evans continued his fine run of form at the Monte Carlo Masters by making it through to the third round where he will meet world No 1 Novak Djokovic.

Evans, who ended a four-match losing streak with his first tour-level victory on clay for four years against 2019 runner-up Dusan Lajovic, continued his winning run by knocking out Miami Open champion Hubert Hurkacz 6-4 6-1 on Wednesday.

It means the Briton will have a first career crack at two-time former champion Djokovic after the Serb claimed a 6-4 6-2 victory against Italian teenager Jannik Sinner.

After the opening set went with serve, the 30-year-old Briton finally forced a decisive break in the ninth game against Hurkacz and then held to take the early initiative.

Hurkacz, the world No 16, appeared to be struggling with illness, but regrouped for the start of the second set - only to then be broken twice as Evans swiftly moved 3-0 ahead.

Play continued through some light rain, with Evans - who won his maiden ATP Tour title at the Murray River Open in January - in complete command and producing some clinical drop shots as well as cross-court winners.

Hurkacz showed no signs of improvement in his condition, but battled on through to hold serve at 1-4 before Evans closed out victory with another break on a fourth match point in game seven.

Afterwards, Evans told Amazon Prime: "I am a bit more comfortable with the gap playing on clay than last year.

"It has been a bit easier to move, I have been accepting it a bit more and enjoying it.

"I have been better in practice and getting on if I have not been playing so well."

Evans added: "I have just been sticking to a game plan, and I will lose serve sometimes, which is what has frustrated me in the past and I struggled to win points on my serve if Plan A didn't work.

"I have accepted that a bit more, stuck with it, serve and volley, but still good pressure.

"I will take every match at a time, keep competing hard and have done that for the past two matches." Top-seed Djokovic remains on course for a potential meeting with 11-time winner, Rafael Nadal on Sunday after he ended the hopes of Next Gen prospect, Sinner.

"It feels great [to be back and] also playing in Monaco, where I reside," said Djokovic. "I have used this club as a training base for almost 15 years, so it feels like playing at home.

"It was a very good encounter. I thought it was a great first match [and] a big challenge for me. Jannik is in form. He played the final [in] Miami and has been playing well. I just hung in there today and managed to find the right shots and the right game at the right time." 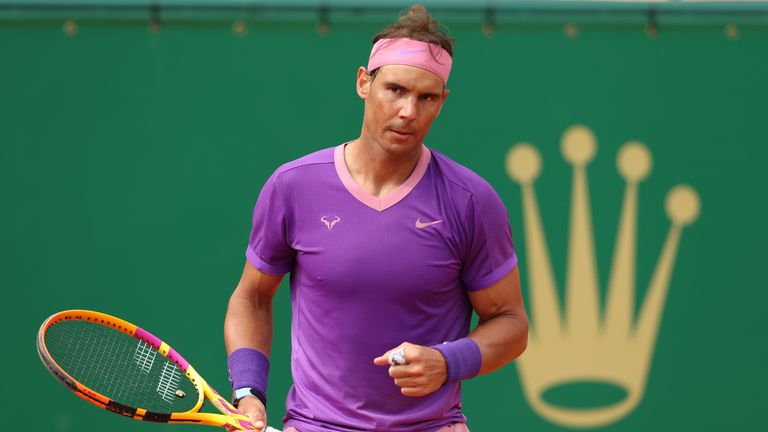 Nadal collected his 72nd win at the tournament and his 390th victory at ATP Masters level after he dispatched Federico Delbonis 6-1 6-2.

The Spaniard, who is chasing a record-extending 12th title in the Principality, will take on Grigor Dimitrov next.

"It was a good start, always good to come back to competition with a victory," he said. "I think I played a solid match and I hope to keep going."

Rafael Nadal & Grigor Dimitrov will face off for a spot in the #RolexMCMasters QF 😤 pic.twitter.com/nPNaMUbuWx

The 22-year-old will meet Marbella champion Pablo Carreno Busta or Russian Karen Khachanov in the third round.