Which Germany will turn up at Wembley? Have Spain found their stride? We take a look at that as well as Renato Sanches' stunning performance for Portugal...

Which Germany will turn up at Wembley? 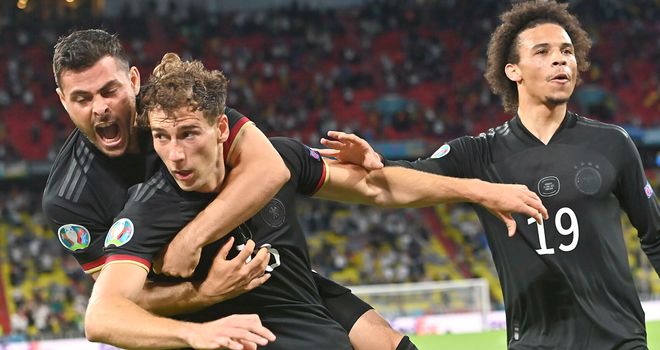 The last 16 of Euro 2020 has thrown up some stunning fixtures, but none match the history of England vs Germany at Wembley.

But the big question for both sides is: just which team will turn up for one of the biggest rivalries in international football?

For Germany, they laboured against France, seeing the better of the possession and more shots, but undone by a Mats Hummels own goal.

Then, against Portugal on Saturday, they were scintillating and dismantled a Portuguese defence anchored by the experienced Pepe and multiple Premier League Player of the Year award winner Ruben Dias. They forced two own goals and not even the talent of Cristiano Ronaldo and Diogo Jota, among others, could beat them.

But on Wednesday, the pressure was on for Germany and it showed on the pitch. Hungary wanted it more and were well organised, scoring once on the break and another from the restart. They only equalised after an error from goalkeeper Peter Gulacsi, although the second was a nice passage of play.

However, Germany were just minutes away from another embarrassing exit at the group stage - they have never been knocked out at that point in successive tournaments - and ending Joachim Low's largely successful managerial tenure on a sour note.

Euro 2020 and Low's reign continues, though, and nothing will rev up the efficient German engines than a clash against England at Wembley in the knockout rounds of an international tournament. Gareth Southgate's side will also need to show far more passion, creativity and intensity than they did against another fierce rival in Scotland. 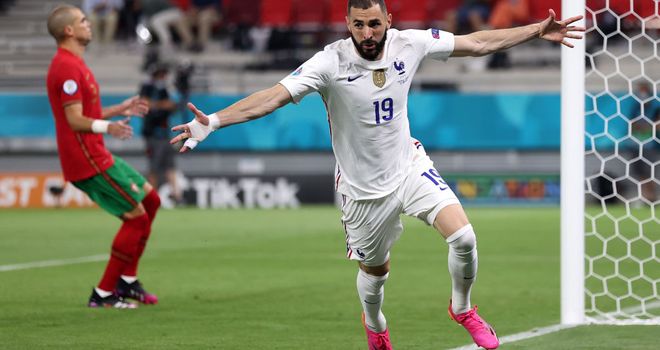 Karim Benzema celebrates scoring for France against Portugal at Euro 2020

For Karim Benzema, it has been a long wait in more ways than one. The penalty that beat Rui Patricio to level the scores in first-half stoppage time of France's 2-2 draw with Portugal was his 31st shot in the European Championships but his first goal in the tournament.

It was his first goal for France anywhere since scoring against Armenia almost six years ago in the October of 2015. Didier Deschamps' decision to recall him has been vindicated - his second goal of the evening underlining that point in superb style.

Benzema was on the shoulder of Ruben Dias, outpacing the Portugal defender before tucking the ball just inside the far corner of the net. Olivier Giroud led the line with distinction at the World Cup even without scoring. Benzema brings something different.

Not everything is flowing for France right now but in topping the toughest group of the tournament, the favourites have demonstrated that they do not need it to. It is Switzerland next up in Bucharest. And Karim Benzema looks like he is just warming up.
Adam Bate

Sanches stars for Portugal in Budapest 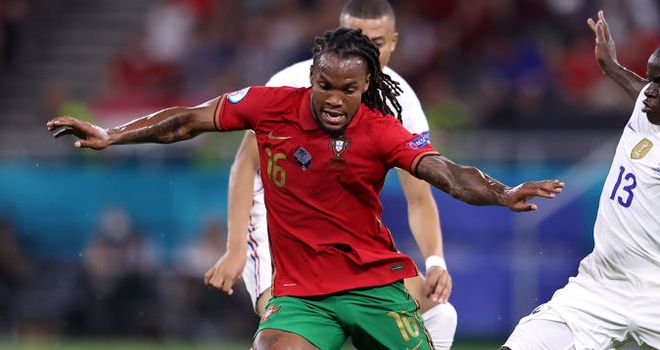 The redemption of Renato Sanches has been one of the stories of the club season, helping inspire Lille to an unlikely Ligue 1 title win. Now the Portugal midfielder has brought his best stuff to the international arena too, the standout performer in the draw with France.

That is a big claim in a game that saw Benzema named the official man of the match and Cristiano Ronaldo equal the world record of 109 goals in international football. But penalties aside it was the robust running of the skilful Sanches that caught the eye.

His has been a curious career, the teenage buzz that promoted that big-money move to Bayern Munich before the bizarre and unhappy season spent with Swansea. He looked a lost soul at that time despite already having lit up one European Championships.

Now he is beginning to make an impact at another, going stride for stride with Paul Pogba and N'Golo Kante. Remarkably, given the presence of the latter on the pitch, it was Sanches who regained possession of the ball more than any other player on the night.

At his worst, games of lesser quality and importance than this one could pass him by. At his best, he has shown once again that he can dominate as well as decorate them. Fernando Santos will surely not omit him again. Expect Sanches to be a key figure against Belgium.
Adam Bate

Sweden show they are more than just steady There is a danger in leaning into national stereotypes when writing about international sport but if Janne Andersson does not ooze pragmatism then who does? Speaking to the Sweden coach before the tournament, he was in no hurry to stir expectations of an attacking game.

"We will be the same in our defence," Andersson told Sky Sports. "We will be hard, compact and difficult to score goals against. We have to have more possession, we have to attack, but we also have to not lose the game and be strong defensively."

Sweden certainly showed that defensive side to their game in shutting out Spain in their Group E opener. They were effective in winning 1-0 against Slovakia next time out. But in their dramatic 3-2 victory over Poland on Wednesday evening, they showed something else.

Emil Forsberg's quality from midfield stood out in a man-of-the-match display as he beat Wojciech Szczesny with his left foot after 81 seconds before repeating the trick with his right just before the hour mark. There is nothing prosaic about Forsberg's game.

Likewise Dejan Kulusevski, the Juventus winger who came off the bench to set up Forsberg's second goal before providing the assist for Viktor Claesson's stoppage-time winner. This young talent has been used sparingly - typical Andersson - but he can turn a game.

Expectations increased in Sweden after reaching the last eight of the 2018 World Cup and the brief return of Zlatan Ibrahimovic only added to the hype. But even in the striker's absence, only Ukraine stand in this team's way of another quarter-final.

"Today, I think maybe people think too much of us but I cannot do much about it," said Andersson in that pre-tournament interview. "We have to work hard, prepare really good, and I think maybe we can be as strong as we were during the World Cup. We will see."

The Sweden coach will continue to play things down. But in topping a group that includes Spain, his team have shown once again that it would be a mistake to underestimate them.
Adam Bate 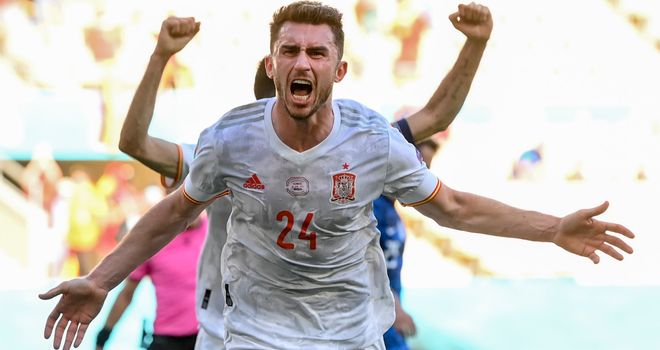 The Spanish media and fanbase are intensely passionate about their national team, and the pressure was well and truly on heading into their final group game on Wednesday.

Luis Enrique's side had twice been frustrated in draws - a dull stalemate with Sweden before being held to a 1-1 draw by a largely disappointing Poland side. Their next task was to beat Slovakia, who had already picked up a shock victory against the Poles.

Early on, it looked to be the same old story for Spain. They were awarded a penalty, but Alvaro Morata saw his effort saved - the fifth spot kick in a row Spain have failed to convert. They were seeing chance after chance fall their way, but just could not find a way past an inspired Dubravka.

Well, inspired until the 30th minute when a shocking own goal handed Spain the advantage and from there, they never looked back.

They improved with every minute that went by, every Spain one-touch pass and every horrendous mistake Slovakia made. And there were a lot of them.

Yes, there were two own goals, but once Spain found their scoring touch from open play, it was wonderful to watch. It was the perfect storm of pressure from the Seville stands and beyond, a much-needed boost in confidence and the implosion of any quality from their opponents.

The result saw Spain finish second in Group E behind surprise group winner Sweden, setting up a last-16 tie with Croatia, who cannot profess to be at their best either. But the victory, and more importantly the performance, has come at the perfect time as Spain look to make their mark in the knockout rounds.
Charlotte Marsh

Hungary can be proud of Euro 2020 efforts 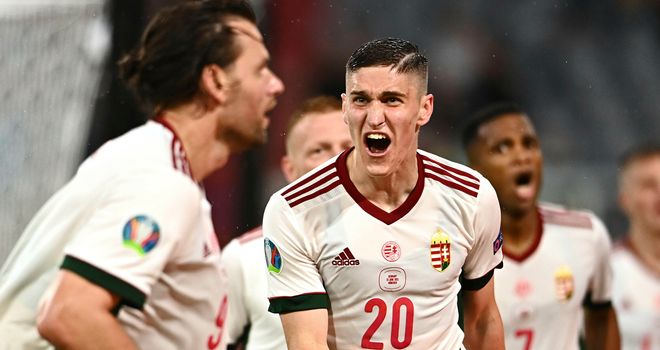 When the groups were drawn for Euro 2020, no one would have given Hungary a sniff of success in Group F.

But up until the 84th minute of the final group game, they were heading into the last 16 for a second successive European Championships and they would have deserved it too.

Against Germany, they were hungrier for success, better organised and dangerous on the counter-attack. They also held world champions and Euro 2020 favourites France to a 1-1 draw and were not far away from another draw with Portugal either.

Hungary manager Marco Rossi said: "I would challenge anyone to say that coming up against these teams to say we could get any points at all. But we got two points; we drew against France and here against Germany. I think these will go down in Hungarian recent footballing history."

But on the flip side, Hungary also showed that, five years on from that 3-3 draw against Portugal at Euro 2016, not too much had really changed. In echo back to that game in Lyon, they twice led Germany on Wednesday, but were pegged back for a result that cost them their spot in the competition.

While Hungary impressed and you would have to say would have made the last 16 if it were not for such a tough group, they must learn how to see out a game at tournament level if they have any hopes of progressing further in future years.
Charlotte Marsh