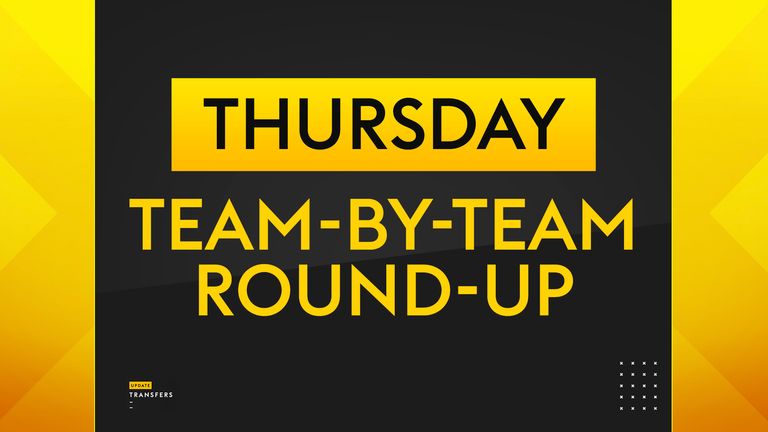 Everton's shortlist for their managerial vacancy is down to three with Italy great Fabio Cannavaro, who has spent recent years working in China, reported to have interviewed well.

Newcastle could try and tie Allan Saint-Maximin down to a new contract if they're relegated to the Championship, Jose Enrique believes.

Al Hilal are prepared to pay the entirety of Pierre-Emerick Aubameyang's £350,000-a-week wage to tempt the Arsenal striker to Saudi Arabia.

Crystal Palace have withdrawn their interest in Aaron Ramsey despite the Juventus midfielder admitting he would be open to working with Selhurst Park boss Patrick Vieira.

Newcastle have made a second loan offer for Manchester United and England forward Jesse Lingard after their opening bid was rebuffed earlier this week.

Wolves have rejected a £15m bid from Tottenham for winger Adama Traore.

Derby MPs are urgently seeking further talks with the EFL in an attempt to break the deadlock that could force the Championship club into liquidation at the start of next month.

Claudio Ranieri has urged the Premier League to make an exception and rearrange Watford's trip to Burnley during the upcoming winter break.

Wimbledon are planning to push on with plans for a huge expansion to 38 courts despite opposition from residents local to the country's biggest tennis venue.

Anthony Joshua and Dillian Whyte will demand a combined £20m to stand aside and allow Tyson Fury to fight Oleksandr Usyk.

Premier League clubs are expected to push for an end to the daily testing of players next month and for fans to no longer have to show Covid passports to attend games.

The FA probe into an Arsenal yellow card was triggered by a surge in the sums bet on a specific player being booked in the final 10 minutes of a match.

Manchester United fear losing Cristiano Ronaldo at the end of the season will leave the club's plans to tour North America in the summer in chaos.

Paris Saint-Germain are to open a new academy in Wales to add to the 15 football schools they already have in England.

Arsenal are reportedly set to make Dusan Vlahovic the club's second-highest paid player in an attempt to finally lure him to London.

Chelsea are among a multitude of clubs considering a move for Barcelona outcast Ousmane Dembele.

Fabio Carvalho is going nowhere this month in a blow to Liverpool and West Ham.

Brighton have beaten Manchester United and Chelsea to the signing of England Under-18 star James Beadle.

Brentford have stepped up their pursuit of Hull City wonderkid Keane Lewis-Potter but are likely to face stiff competition from Tottenham.

Ajax will make one final attempt to land Steven Bergwijn - even though Antonio Conte wants him to stay.

Oleksandr Zinchenko wants to fight for his place at Manchester City despite interest from La Liga club Real Betis.

Arsenal are willing to let defenders Calum Chambers and Cedric Soares leave the club in January as they look to refresh their right-back options.

American businessman Rich Riley is in talks to save Derby County with a £7m windfall of funds they need to avoid being kicked out of the EFL.

Liverpool have rejected two offers from Watford for Nat Phillips.

Uefa has confirmed that Champions League teams will have to comply with local rules on Covid vaccinations, which could lead to Chelsea's unvaccinated players missing the away leg of their tie with Lille.

World Rugby chief Bill Beaumont has pledged "no player will be left behind" and promised support and welfare for those suffering with early-onset dementia.

Spain's football player union has warned Barcelona over the "sign new deal or leave in January" ultimatum given to Ousmane Dembele earlier this week.

Atalanta are toying with the idea of cashing in on Robin Gosens, with the left-sided Germany international already being scouted by Newcastle United.

Dean Henderson is ready to stay and fight for his Manchester United future this month despite making just two appearances this term.

Paris Saint-Germain are looking to extend Xavi Simons' contract in a blow to Giovanni van Bronckhorst's hopes of tempting him to Rangers in the summer.

Kyle Lafferty is set to make his return to Scottish football and sign a short-term deal to return to Championship side Kilmarnock.

Jason Cummings will leave Dundee for Central Coast Mariners this weekend as the ex-Rangers and Hibs star makes a fresh start.

Jim Goodwin says Jamie McGrath has been "badly advised" as his St Mirren future hangs in the balance.