Saudi Arabian club Al Nassr offer to sign Arsenal striker Pierre-Emerick Aubameyang on loan until the end of the season; Arsenal will consider offers for him this month; Arsenal want to sign Juventus midfielder Arthur Melo on loan; midfielder's agent was in London on Wednesday for talks

With reports of a possible exit for Pierre-Emerick Aubameyang, we take a look back at some of his best Premier League goals for Arsenal.

Saudi Arabian club Al Nassr have offered to sign Arsenal striker Pierre-Emerick Aubameyang on loan until the end of the season.

Sky Sports News reported earlier this month Arsenal would consider offers this month for their former skipper, who was stripped of the Arsenal captaincy in December after a disciplinary breach.

The 32-year-old has 18 months left on his contract and an exit in this transfer window would represent a saving of around £25m in wages for the rest of his contract.

Aubameyang has recently returned to London from the Africa Cup of Nations for medical examinations after being diagnosed with heart lesions following a positive test for Covid-19. The Gabon international did not feature in either of the team's first two group games at the tournament. 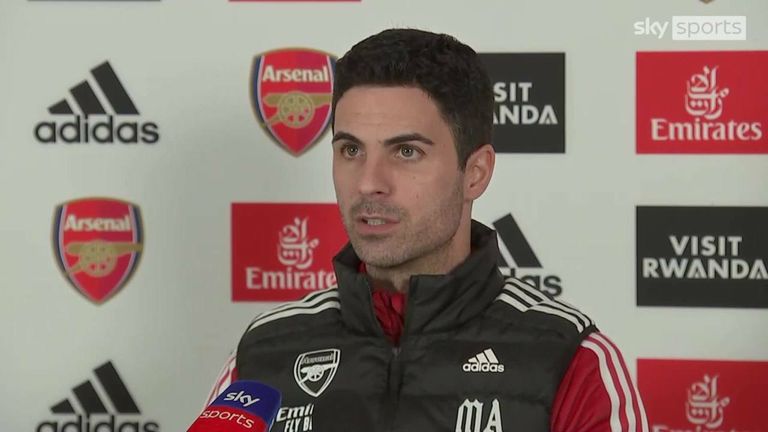 Asked about Aubameyang's situation, Arsenal boss Mikel Arteta said at a news conference on Wednesday: "He's in London and now he's going through some examinations because we haven't had any clarity from the Gabon national team about the reasons why he came back.

"Obviously it's our obligation to make sure that medically he is safe and in good condition. Historically, with everything we've done with the player, he has never had that issue."

Aubameyang has not featured for Arteta's side since the club's 2-1 defeat to Everton in the Premier League on December 6.

He has made 15 appearances across all competitions this season and scored four league goals.

Arsenal want to sign Juventus midfielder Arthur Melo on loan, with the Brazilian's agent in London on Wednesday for talks with the Gunners.

The Italian side want an option or obligation to buy in the summer included in the deal.

Juve also want to line up a replacement before allowing the 25-year-old to leave.

Arthur moved to Juventus 18 months ago from Barcelona as part of a swap deal with Miralem Pjanic.