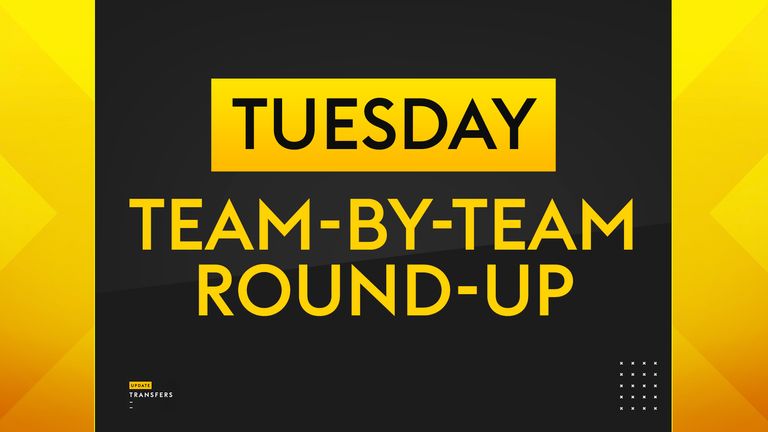 Paul Pogba has told Manchester United he wants to join Real Madrid in the summer.

Luis Suarez could be set for a reunion with Steven Gerrard at Aston Villa.

Manchester United interim manager Ralf Rangnick has told his bosses that Harry Maguire, Luke Shaw and Aaron Wan-Bissaka are "not good enough" to play for the club.

Arsenal are pushing hard to land Juventus midfielder Arthur on loan before the transfer window shuts in less than a fortnight, but the Serie A giants are playing hardball with the terms of the deal.

Manchester United boss Ralf Rangnick has allowed his players five days off during the upcoming break, while Aston Villa's stars are also getting nearly a whole week of leave.

Wayne Rooney is edging closer to a sensational return to Everton as manager - but Jose Mourinho is also in the running.

Burnley will offer north of £200,000 for 17-year-old Oldham whizkid Harry Vaughan after having an initial bid rejected in the summer.

Liverpool are ready to battle West Ham for Fulham teenager Fabio Carvalho as they weigh up a £5m January swoop for the 19-year-old.

A blunder referee is reportedly facing a 'lengthy ban' after his disastrous error cost AC Milan victory against Spezia.

Arsenal midfielder Mohamed Elneny could be on his way out of the Emirates in the winter transfer window with Fenerbahce keen to bring him back to Turkey.

Ousmane Dembele has reportedly been given 48 hours to sign a new Barcelona contract.

Anthony Martial wants to move to a foreign club this month, with Juventus and Barcelona interested.

Andreas Christensen has reportedly been approached by other Premier League clubs but will reject them out of respect for Chelsea.

Sam Allardyce believes Everton have made the correct appointment by naming Duncan Ferguson as the caretaker manager.

Arsenal's Carabao Cup tie with Liverpool on Thursday is set to go ahead.

Newcastle United are in talks over a move for Bayer Leverkusen left-back Mitchel Bakker.

Brentford are £3m short of Nottingham Forest's valuation in their attempts to land winger Brennan Johnson.

Watford are closing in on a £3.5m deal for Bordeaux winger Samuel Kalu.

Lewis Hamilton's future was unresolved on Tuesday night as conflicting views continue to swirl over the fate of race director Michael Masi, the Australian who oversaw the controversial last lap of the 2021 decider.

Graham Thorpe's position as England assistant coach looks untenable after police were called to the team hotel in Hobart because he was smoking a cigar inside the premises during a drinking session that lasted until 6am.

The former England team-mates Wayne Rooney and Frank Lampard are to be interviewed for the vacant Everton manager's job as the club move to a new four-strong shortlist.

The Middlesbrough chairman Steve Gibson has responded to claims that his club's legal action is holding up Derby County's search for a new owner by revealing a settlement offer was made to the stricken Championship club's administrators in November and no response has come back.

Thomas Frank, the Brentford head coach, described Christian Eriksen as one of the best players in the world and said it is a sign of the club's progress that they have been linked with the Danish playmaker.

Manchester United's unwillingness to give Juventus a discount on Anthony Martial has blocked a loan move to Turin for the want-away striker.

Tottenham boss Antonio Conte wants to make at least three signings this month as his side prepare to launch an assault on the top four.

Arsenal's bid to find a long-term replacement for Pierre-Emerick Aubameyang looks set to drag on, with reports suggesting that their chances of signing Alexander Isak have been dealt a setback.

Competitors at the Beijing Winter Olympics will face an "Orwellian surveillance state" in China and could put themselves in danger if they speak out in support of the Uyghur Muslims, human rights and athlete advocacy groups have said.

The first tickets for this year's World Cup are to go on sale on Wednesday with the lowest category, for Qatar residents only, priced at $11 (£8) - the cheapest for a World Cup since 1986 in Mexico.

The challenges facing Novak Djokovic continue to mount after the Spanish government advised him to get vaccinated against Covid-19 if he wants to compete there.

Robbie Neilson insists John Souttar can handle the heat from unhappy Hearts fans but he hopes the Jambos support can bury the hatchet for the rest of the season.